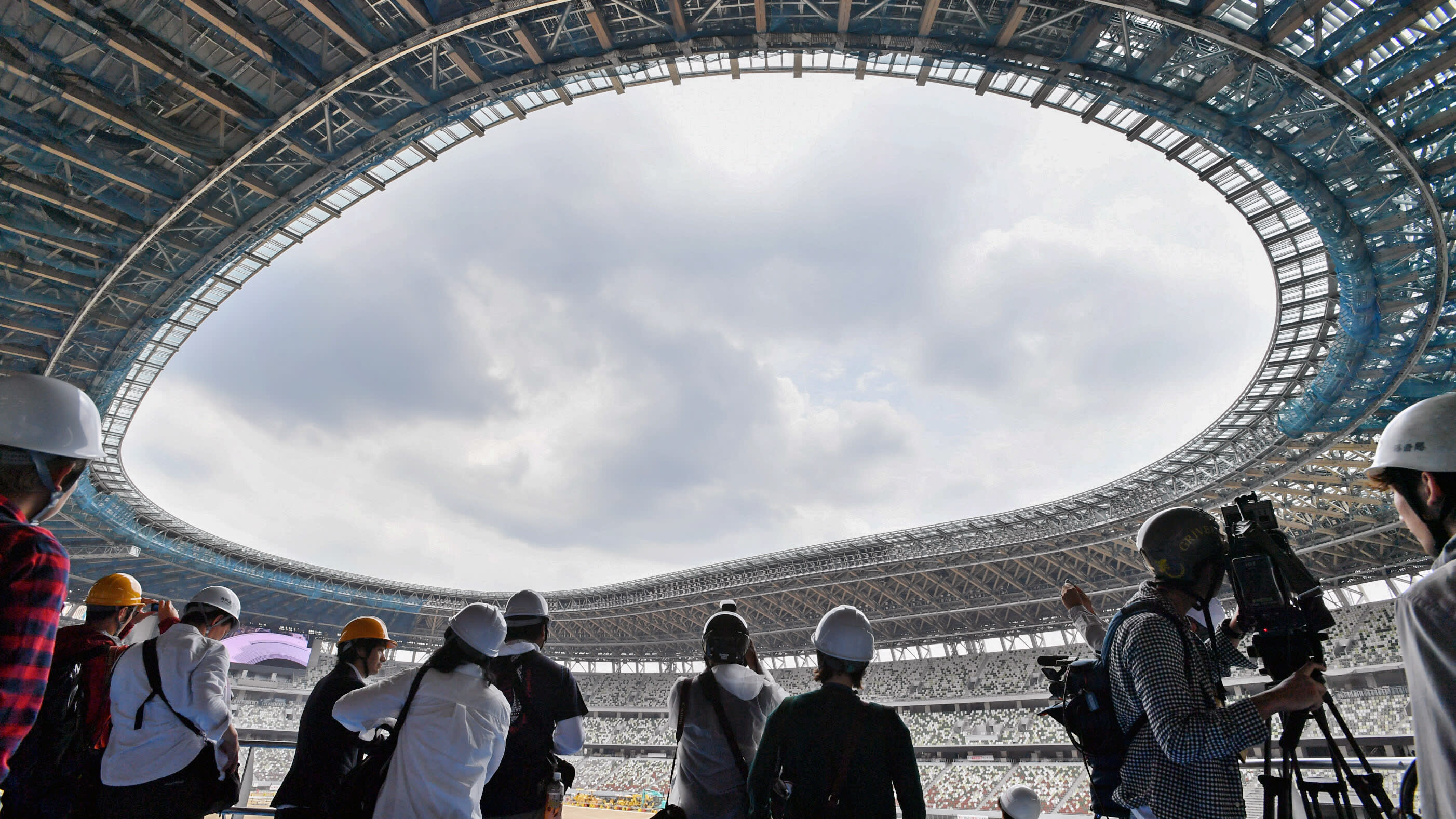 TOKYO -- Japan's new Olympic stadium opened its doors to the media on Wednesday, showing off its nature-inspired design and advanced environmental features as it enters the final phase of construction.

A roof of wood and steel beams stretches over the seats of New National Stadium, the main event stage where the opening and closing ceremonies for next year's Summer Games will take place. Sand remained spread over the field itself, but turf is to be laid this month for track-and-field grounds set to be finished in August or September.

With just about a year to go, the structure is 90% complete, the Japan Sport Council said, with construction slated to finish at the end of November before an official unveiling on Dec. 21. Work is currently focused on external areas like pedestrian walkways, where decorative trees are being planted.

The three-tier stands will ultimately hold 60,000 seats, of which 45,000 are already in place. The chairs are colored with nature-evoking greens, browns and other shades, distributed at random. The lowest level will offer a close-up view of the athletes, while the stadium's north and south inner walls feature large, high-definition screens to show the action.

The building is designed to let in wind from outside, and has 185 large spot coolers for good measure. These fans are pointed to blow from the stands down toward the field and help keep heat from building up inside. Cool-mist emitters are set up at eight locations throughout the stadium.

Work began in December 2016 on plans drawn up by architect Kengo Kuma, with costs set to exceed 150 billion yen ($1.38 billion). Domestic lumber and other materials from throughout Japan play into a design the Japan Sport Council described as evoking wood's "warmth."

Should disaster strike, concourse space on the stadium's second and third floors can be used as shelters. The seating area has many exit routes, and spectators will reportedly be able to get outside the stadium within 15 minutes from any seat. The media were given a sneak peek of the New National Stadium, which is roughly 90% complete. (Photo by Wataru Ito)

The building also features emergency supply storehouses capable of holding enough water and preserved foodstuffs for about 80,000 people. And there are backup power supplies designed to keep functioning in emergencies, with plugs available for people to charge phones.

After the games, the track portions of the stadium will be redone and the seating expanded to 80,000 for the structure to be converted into a space for ball-based sports. JSC intends to sell the rights to operate the facility after the Olympics, but with annual maintenance and upkeep costs of 2.4 billion yen, finding a buyer may prove a challenge.