Postponing emerges as most likely, while full cancellation still unlikely 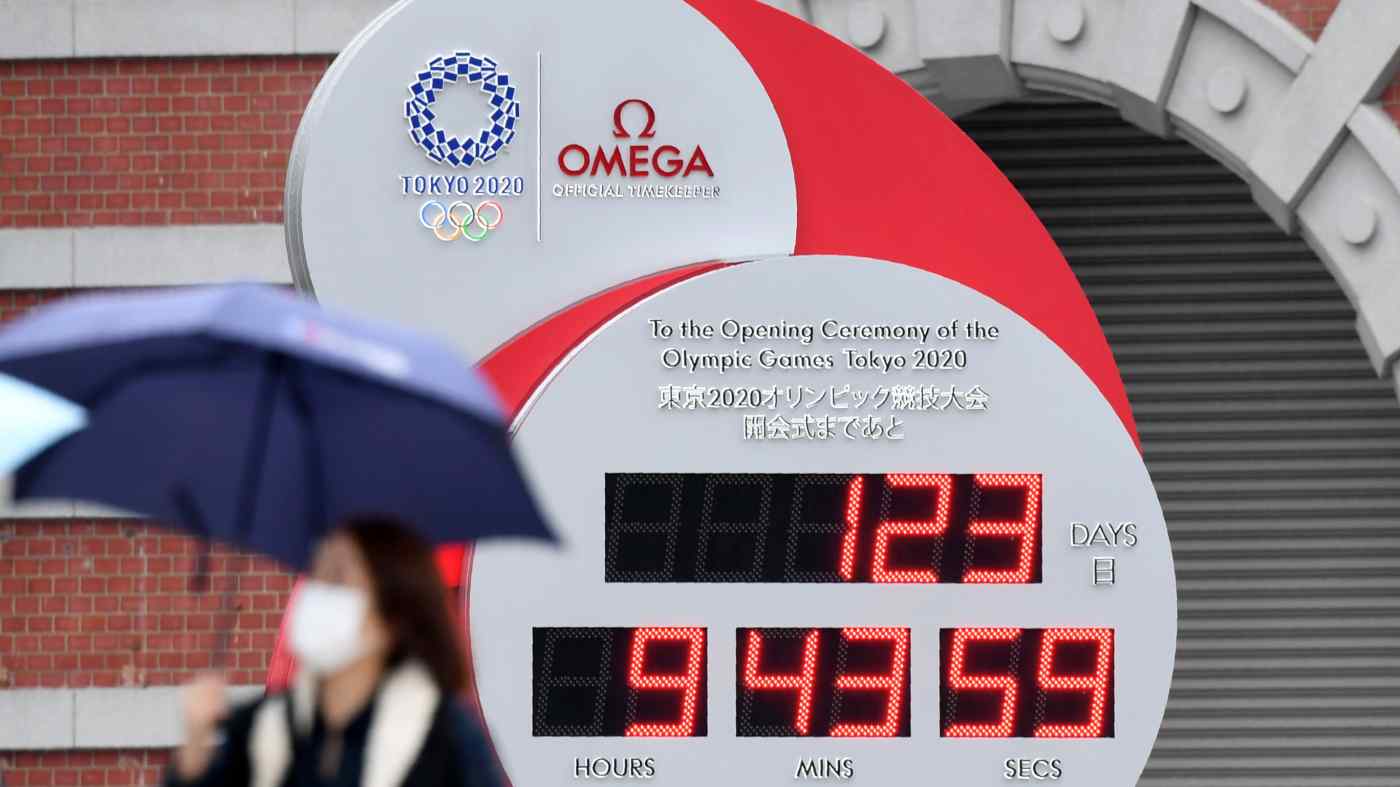 A woman wearing a face mask walks past a countdown clock for the opening ceremony of the Tokyo 2020 Olympics in Tokyo on March 23.  The International Olympic Committee has said that it will make its decision on whether to cancel, postpone or go ahead with the games within four weeks.(Photo by Karina Nooka)
FRANCESCA REGALADO, Nikkei staff writerMarch 23, 2020 11:55 JST | Japan
CopyCopied

TOKYO -- The International Olympic Committee has given itself a four-week deadline to decide when to hold this year's summer games in Tokyo. While the official start date remains July 24, the IOC board announced after a Sunday teleconference that it is open to changing the start date of the Games and will step up "scenario planning."

"These scenarios relate to modifying existing operational plans for the Games to go ahead on 24 July 2020, and also for changes to the start date of the Games," the IOC said in a statement.

The board is pressed to make a decision as public opinion in Japan, this year's host country, is shifting against the long-anticipated games, with 70% saying the Olympics cannot go ahead as planned, in a poll conducted by Kyodo News.

National Olympic committees and international sports federations have voiced their athletes' concerns to the IOC, with a few athletes doing so publicly. Last week, Canadian ice hockey player Hayley Wickenheiser, an IOC member, and Japanese judoka Kaori Yamaguchi, a member of the Japanese Olympic Committee, called for the Tokyo Games to be postponed.

A lot can change between now and July with the coronavirus situation, but as confirmed infections surpassed 300,000 over the weekend, a postponement seems inevitable.

While postponement has been agreed to by stakeholders in all but writing, negotiations within IOC headquarters in Lausanne, Switzerland, are centered on how long the delay would be and what to do about contractual obligations.

The host city contract signed by the Tokyo organizing committee says: "The IOC shall be entitled to terminate this contract and to withdraw the Games from the city if ... the Games are not celebrated during the year 2020." The idea of postponing the games until the fall has been floated, but there has been no evidence that the coronavirus can be contained by then.

An extension of Tokyo's marketing rights agreement beyond its end date of Dec. 31 would overlap with France's rights to promote the Paris 2024 Games. About $3 billion in local sponsorships have been raised from Japanese companies, whose rights expire along with the Tokyo organizing committee's.

The summer of 2021 may be the most viable option for a postponement. Delaying until 2022 would cause an overlap with the Winter Games, which were split from the Summer Games in 1992 because the growing event became financially unwieldy for sponsors and broadcasters.

On Twitter, Terrence Burns, an Olympic marketing consultant, proposed bumping up the Olympiad by four years. That scenario would see the Tokyo Games take place in 2024, Paris in 2028, and Los Angeles, whose bid Burns helped secure, in 2032.

The past two days of statements from the IOC and the Japanese government indicate a delay announcement is only a matter of time, depending on how quickly lawyers for both sides can figure out the contractual implications. Prime Minister Shinzo Abe said this morning that Japan has to consider postponing the games if the games cannot be held in its ideal form, but as late as last week, executives of the Tokyo Olympic organizing committee insisted the games could go ahead as planned with limited attendance.

There would be no winners in this scenario, except perhaps the broadcasters. With more people all over the world remaining at home to contain the coronavirus, an Olympics in Tokyo this summer could easily surpass the 2016 Rio Games, where more than 3.2 billion viewers tuned in. Broadcasters could anticipate a bigger audience, allowing them to sell a higher rate for ads.

"Olympic broadcast partnerships have been the single greatest source of revenue for the Olympic Movement for more than three decades," according to the Olympic marketing fact file. The IOC reaped $2.9 billion from Rio broadcasting revenues and $4.2 billion in broadcasting fees from 2013 to 2016.

Everyone else, however, would lose in this scenario. Tokyo organizers would have to refund tickets already sold, 4.48 million of which were in Japan alone out of the 6.8 million available in total. The organizing committee would lose out on at least $321 million, the amount Rio organizers earned from selling 91% of available tickets in 2016. And without international audiences, the Japanese economy would lose 150 billion yen ($1.3 billion) in inbound consumption, according to Goldman Sachs estimates.

With several qualifying events canceled due to the coronavirus and travel restrictions, international federations would need IOC approval to adapt their respective sports' qualifying rules. Athletes would have to rush to compete in a tighter window, with some already losing valuable training time due to quarantine measures.

"If we lose the level playing field, then we lose the integrity of the competition," said Stephen Coe, president of World Athletics.

And then there is the question of how to protect 5,000 athletes and trainers living in close quarters in the Olympic Village.

"No one's going to win out of this," said Holtzman. "There's no winning in a pandemic."

The modern Olympic Games have only been canceled five times -- three summer games and two winter games -- all due to war. The Moscow Games in 1980 were heavily boycotted to protest the Soviet Union's invasion of Afghanistan, and the Los Angeles Games in 1984 were boycotted by the then-Soviet allies.

"It's a problem that's happened every 40 years -- it's the cursed Olympics, and that's a fact," Deputy Prime Minister Taro Aso said in the Diet last week.

The biggest loser in a cancellation would be the Japanese economy. Analysts expect the economic loss could reach 7.8 trillion yen, not including reimbursements to the IOC by the Tokyo organizers. From the broadcasting revenues it collects, the IOC contributes to the host city committee to the tune of $800 million, which would be subject to full or partial reimbursement in case of full or partial cancellation of the Games.

That money, in turn, would supplement the IOC's $900 million reserve fund to reimburse broadcasters and sponsorship partners in case of cancellation. The IOC would owe $1.45 billion to NBC, its official broadcaster in the U.S., part of $1 billion to Japan's NHK consortium, and part of $116.5 million to Australia's Seven Media, which paid that amount for three Olympics, including Rio and Pyeongchang.

Given the financial considerations, a postponed Olympics would be better than no Olympics. In their Sunday night statement, the IOC reiterated that cancellation is not on the table. "The IOC EB emphasized that a cancellation of the Olympic Games Tokyo 2020 would not solve any of the problems or help anybody," the executive board said.