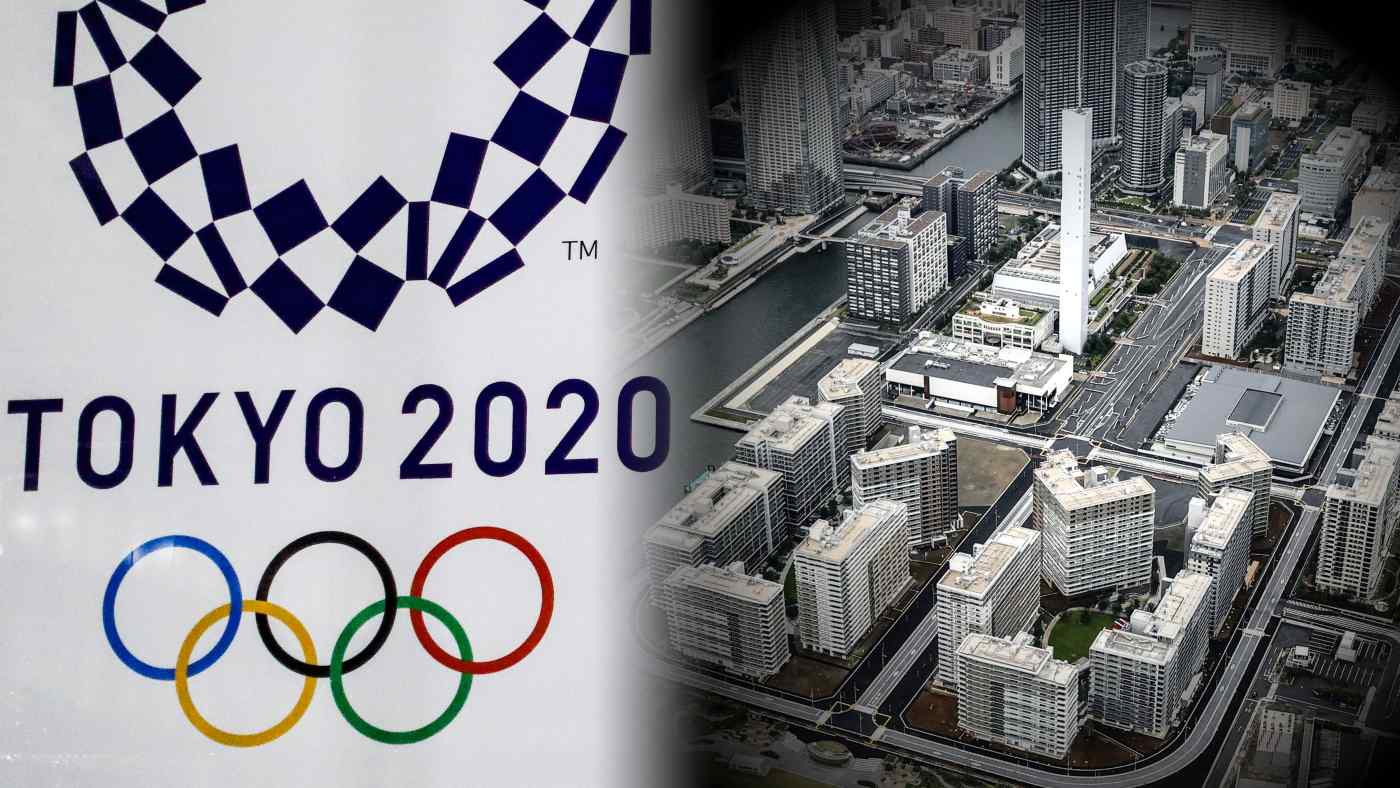 The postponement of the Tokyo Olympics is having a domino effect that has left condo owners in Tokyo without their homes and a big Japanese sporting goods brand without its flagship store in New York. (Source photos by Kyodo and Reuters)
RURIKA IMAHASHI and FRANCESCA REGALADOFebruary 16, 2021 12:20 JST | Japan
CopyCopied

TOKYO -- The owners of condos in Harumi Flag, a premium residential complex fronting Tokyo Bay, received notice last summer that their move-in date would be postponed by a year.

Their other option, canceling contracts, was equally unpalatable. They were told that Mitsui Fudosan, the project's major realtor, had no choice but to sit on the condos for another year.

That is because there is no Harumi Flag yet. The development is still known as the Olympic Village, waiting to house athletes competing in the postponed Tokyo Games.

Now Mitsui Fudosan, one of 68 Japanese corporations to sign on as a sponsor of the pandemic-delayed games, could face lawsuits.

The real estate giant is not alone in suffering due to the Olympics. Several gold partners -- the highest domestic sponsorship tier -- during the past two weeks have reported dismal earnings, capping off a disappointing year that was supposed to be a triumph for Japan's society and the business community. Now, as disputes mount, many corporate sponsors are wondering if their reputations will be tarnished.

The Olympic Village issue has been simmering for months. A group of 24 condo buyers are petitioning Mitsui Fudosan this month to explain the delay and are demanding compensation.

"Using the coronavirus pandemic as an excuse, they changed the conditions unilaterally," said a buyer whose move-in date was originally 2023. Real estate companies need time to convert the complex into a condominium complex, which takes around a year. Now it will be delayed for one year due to the postponed games. "We need to move twice and pay more expensive rent because of the delay," said the buyer.

Mitsui Fudosan told Nikkei Asia it will respond appropriately when it receives the petition. "We explained to our customers by email or phone individually," said a company representative.

In its third-quarter earnings report, Mitsui Fudosan forecast a 29% fall in operating profit for the fiscal year ending March.

Advertising giant Dentsu's situation is much worse. On Tuesday, its share price slipped 4% as investors rushed to sell the stock. The previous day, it posted its biggest-ever annual net loss of 159 billion yen ($1.5 billion) for the year through December, due to an impairment loss related to its overseas business. Nikkei reported last month that Dentsu is considering selling its 48-story headquarters tower in Tokyo as part of restructuring efforts.

Mounting losses related to past acquisitions explain much of Dentsu's historic deterioration, but the advertising conglomerate is deeply involved in the Olympics, and the postponement has ripped its business.

Soga said he hopes the games will be held but cited "client confidentiality" in declining to answer how much the sports extravaganza affects earnings. The Tokyo Olympic organizing committee is a client. Dentsu rallied corporate Japan to raise a record $3 billion in sponsorship money for the Olympics -- three times the previous record.

Dentsu appealed to corporations' patriotic duty, touting an opportunity to enhance corporate images and boost global reputations. But the pandemic has dragged on, leading to plunging Japanese sentiment for hosting the Olympics. Amid the turmoil, the organizing committee's growing expenses have fallen on Japan Inc.'s 15 gold sponsors, each of whom has pitched in an extra 1 billion yen to defray postponement costs. 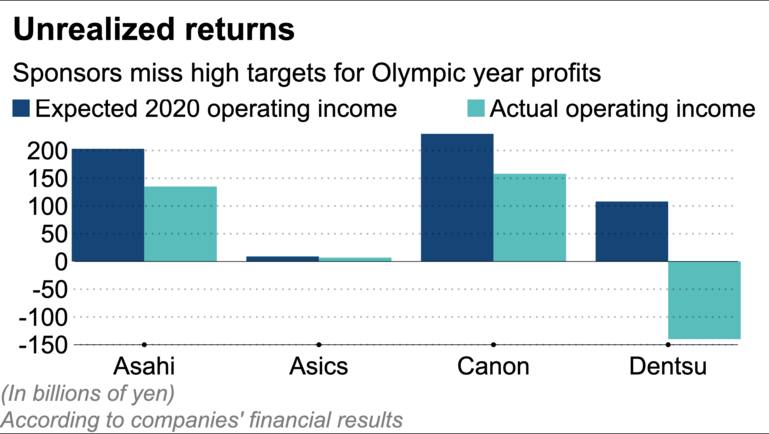 Sporting goods maker Asics is taking on these unexpected expenses as it deals with weakening sales. Its disputes include the closure of its flagship store in New York. Asics, which originally estimated 200 billion yen in Olympic-related sales, ultimately took an extraordinary loss of 2.3 billion yen for 2020, during which it posted negative operating profits for three quarters. The company is also sitting on 4.5 billion yen worth of Olympic-related inventory, according to the earnings report it posted on Friday.

And questions surrounding the Tokyo Games -- Will they take place this summer? If they do, will spectators be allowed? -- has made it impossible for Asics to precisely forecast sales. On Monday, the company's share price fell 10%.

"We cannot make any assumption regarding how the Olympic Games will be held," Asics Chief Operating Officer Yasuhito Hirota said during the company's earnings conference. "That is why we secured enough flexibility in sales and profit for this term."

The 15 gold sponsors put their collective foot down this month after Tokyo 2020 President Yoshiro Mori's sexist comments this month dealt a further setback to the games. Mori resigned his post last week. Yoshiro Mori stepped down as president of the Tokyo Olympic Organizing Committee weeks after making discriminatory comments about women.     © Kyodo

Companies were already wondering whether advertising during the tainted Olympics would be beneficial or harmful to their brands. Back in November, 9% of 54 companies told Japanese public broadcaster NHK that there was no benefit to being a sponsor, while 64% said they were unsure about recouping their investment. More recently, a public-opinion poll by the Yomiuri Shimbun found that 61% of respondents want the games postponed again or canceled altogether.

Gold sponsor Canon still plans to pursue an aggressive marketing campaign to make the most of the Tokyo Games. It expects an increase in sales and net profit for the next fiscal year despite posting a 37% fall in net profit for 2020.

"We are considering countermeasures in case the games will not be held," Canon CFO Toshizo Tanaka said.

Japan Inc.'s Olympic problems are spilling over into the Beijing 2022 Winter Games and the Paris 2024 Summer Games as potential corporate sponsors are now thinking twice about signing on. A Chinese sponsor told Nikkei that it will watch how the Tokyo Olympics play out and "assess if our sponsorship will lead to business opportunities."

The benefit that any athlete, stadium or tournament sponsorship brings a company is hard to measure. As such, companies typically hope these kinds of investments pay off in goodwill and brand recognition.

"That's a gamble that firms take any time they take on any kind of sponsorship effort," said Victor Matheson, sports economist at the College of the Holy Cross in Massachusetts. As for the Tokyo Olympics, Matheson said, "You have your name very specifically tied to this event, and it's not going well due to huge cost overruns."

Incoming Asahi CEO Atsushi Katsuki sounded optimistic that the games could still be a source of national pride and lift Japan's spirits. "It is our mission to make the games so successful that the turmoil can be forgotten," Katsuki told reporters on Friday.

That may be easier said than done for the Harumi Flag owners who will remain without condos until 2024.

Real estate companies say no one knows when the pandemic will end, according to a lawyer for condo owners. Contracts prescribe that "If delivery is delayed for reasons that are not intentional or negligent on the part of the seller, or for reasons that cannot be foreseen, the buyers must accept the delay."

But the lawyer claims sellers are legally bound to give condo buyers sufficient reason for the delay. Meanwhile, the Tokyo Metropolitan government paid an additional 3.8 billion yen to extend the contract with real estate companies to use the condos as part of the Olympic Village. The lawyer claims the real estate companies responded to the Tokyo government's offer on their own, and that they intentionally failed to fulfill the contract.

"I was a fan of Mitsui Fudosan," a buyer told Nikkei Asia. "But they will only damage their corporate image through the Olympics."