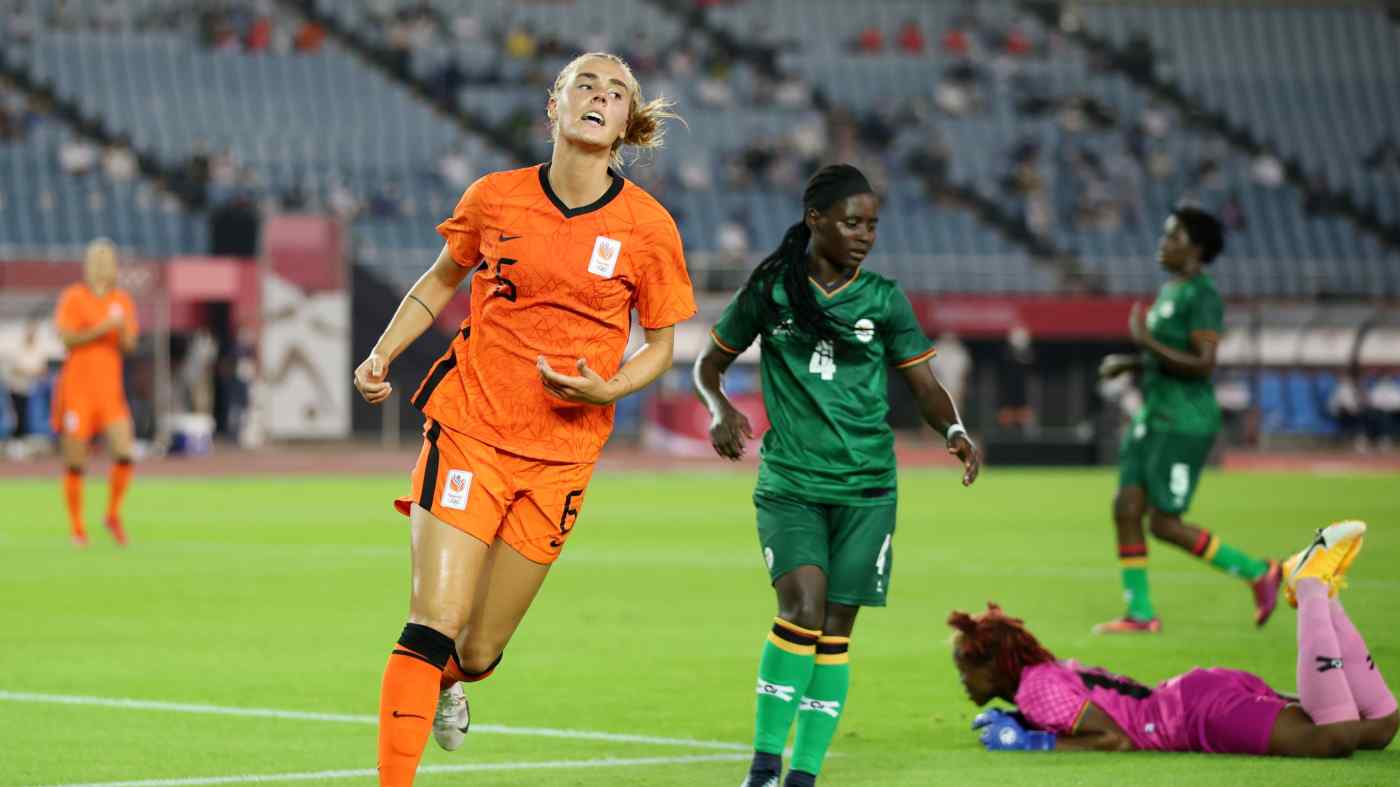 The Zambian and Dutch women's soccer teams play at Miyagi Stadium on July 21. Spectators were spread out across the venue, and instructed to clap instead of cheer to minimize the risk of spreading COVID-19.   © Reuters
HISASHI TSUTSUI, Nikkei staff writerJuly 22, 2021 04:36 JST | Japan
CopyCopied

TOKYO -- As the first events of the Tokyo Olympics kick off, organizers are taking extra precautions to protect athletes and staffers from both the coronavirus pandemic and Japan's sweltering summer heat.

The clanging of bats hitting the ball echoed across Fukushima Azuma Baseball Stadium Wednesday morning, where the Japanese and Australian softball teams faced off in the very first sporting event for the Games.

To minimize contact, the teams staggered their entrance onto the field and shared no handshakes before or after the game. Players even avoided high-fiving their teammates after a home run.

The stands were mostly empty, with spectators banned from attending events in six prefectures including Tokyo due to the resurgence of coronavirus cases in the country. But a manufactured buzzing noise -- to mimic crowds, organizers said -- filled the stadium from time to time.

Event staffers wore masks throughout the event and postgame interviews were held outdoors, with fences keeping athletes and the press two meters apart.

Meanwhile, in Miyagi Prefecture, which is exempt from the spectator ban, about 3,000 fans headed for Miyagi Stadium to watch two women's soccer games.

Six thousand were supposed to attend, but the final figure roughly halved due to a flurry of cancellations. Spectators were spread out across the 49,000-seat venue, and supported athletes by clapping instead of cheering, as instructed.

The stadium is located about 10 km from the city of Sendai. Ticket holders could only access the venue via chartered shuttles, which required their own temperature checks and left from Sendai Station.

There was concern that fans afterward would linger in the area around Sendai Station, which is home to many restaurants. Volunteers held up signs near the station and the stadium urging fans to go straight to the games, then straight home. 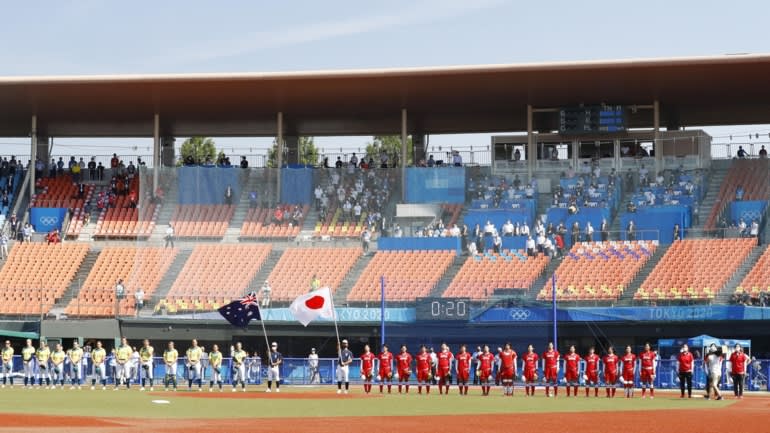 In addition to the coronavirus, organizers are grappling with Japan's notoriously hot and humid summer.

With temperatures reaching a high of 35 C in Fukushima on Wednesday, medical staffers made their rounds through the Azuma Stadium during the Japan-Australia softball game. Signs were put up reminding people to wear hats and drink lots of liquids.

The Australian softball team had been training in the city of Ota in Gunma Prefecture since June. The U.S. team also arrived in Japan early on July 4 so it could adjust to the humid heat.

The Japan Meteorological Agency forecasts higher-than-usual temperatures in northern Japan for the month through Aug. 16. It expects lots of sun in eastern Japan for the two weeks starting July 31, along with typical heat.

The weather in Tokyo, where the biggest venues are located, is also predicted to exceed the average over the next few days, with a high of 34 C on Thursday and 33 C on Friday, the day of the opening ceremony.

The heat is expected to subside slightly afterward, but the lows are not expected to drop as much as usual, meaning little reprieve at night.

Consequently, organizers have set up shaded rest areas and clinics to treat heatstroke at sporting facilities. Athletes will have access to ice baths, and event staffers have received instant cold packs and other items to keep them cool.

The hot weather also factored into the schedule and venues of events. Marathons and race-walking events were moved to the northern city of Sapporo from Tokyo. The start time for triathlons was moved up an hour to 6:30 a.m. for individuals and 7:30 a.m. for relays, due to concern over the temperature of the water at Odaiba Marine Park.