The Olympics' main venue, the National Stadium, was used on Aug. 23 for a track and field event held without spectators. (photo by Karina Noka)
Nikkei staff writersSeptember 5, 2020 13:10 JST | Japan
CopyCopied

TOKYO -- Operators of venues for the Tokyo Olympics and Paralympics are renting out the facilities until they hit the spotlight next year, after the games were postponed due to the coronavirus pandemic.

Some venues are now available for events and training involving athletes. The operators hope that offering them for use instead of leaving them idle will help keep public attention on the summer games amid lingering uncertainty about their prospects.

If the conditions of the pandemic permit, the operators may make facilities available to the public as well.

Another motivation is that the facilities' financial prospects are less than bright. Many are expected to lose money or struggle to operate in the black. The operators want to find a formula for profitable operations, or at least avoid massive losses.

The Kasai Canoe Slalom Centre in Tokyo's Edogawa Ward, which boasts the nation's first artificial slalom course, resumed allowing use by athletes in July. Work to build temporary spectator stands for the games was suspended following the organizers' decision to postpone them.

The Tokyo Metropolitan Government, which operates the center, decided to respond to Olympic canoeists' expressed desire to use the facility for training. It has been made available for top contenders with COVID-19 precautions in place, including regular disinfection. 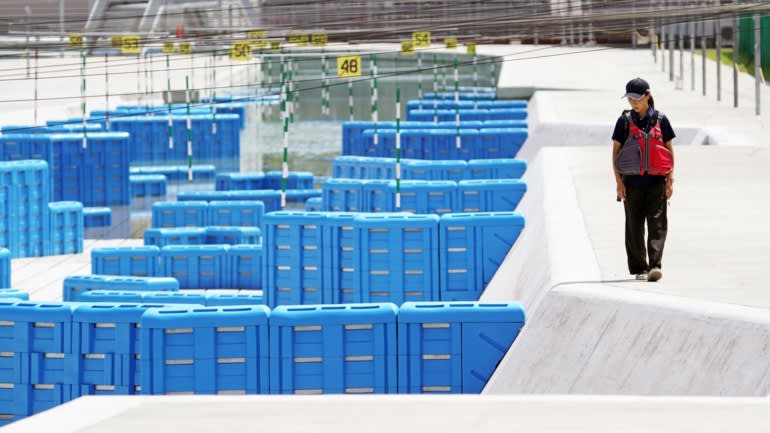 A staff member at the Kasai Canoe Slalom Centre checks the course in August. (Photo by Kei Higuchi)

Exclusive rental of the competition course costs about 60,000 yen ($560) per hour. The metropolitan government is also planning a rafting program for citizens of Tokyo, but the fees have yet to be set. When it organized a trial tour in 2019 for a fee of 3,500 yen per person, the event proved very popular, with the applicant list filling up immediately.

An official involved says the metropolitan government does not want to leave the center unused until the Olympics and Paralympics. "We plan to offer opportunities for ordinary citizens to use the center as much as possible so that they can feel connected to the events and the facility. We also want to ensure the facility will be used by many people after the events," the official said.

At Tokyo Tatsumi International Swimming Center in Koto Ward, the venue for water polo, the city in August sponsored swimming events for Tokyo children and adults, dubbed "Re Start." At one of those events, top female swimmer Rikako Ikee, whose career has long been disrupted by leukemia, returned to competition. The facility will be made available mainly to sports organizations for the time being but will also be opened to city residents when the COVID-19 situation improves.

The games' main venue, the new National Stadium, which will host the opening and closing ceremonies as well as track and field events, was used on Aug. 23 for the previously delayed Seiko Golden Grand Prix 2020 Tokyo. The Japan Association of Athletics Federations held the track and field event without spectators as a precaution against infection.

JAAF General Secretary Akira Kazama said he expected the event would "create fresh momentum for the Olympics by showing how athletes compete in the venue."

Some venues cannot be offered for use because of suspended construction work or other reasons. Ariake Arena, the Koto Ward facility that will host volleyball events during the Olympics, will not be made available for sporting events before the summer games due to issues over facility management and safety. It will only be used for various events hosted by the metropolitan government.

At Tsurigasaki Surfing Beach in Ichinomiya, Chiba Prefecture, where surfing events will be held, some facilities remain incomplete, including prefabricated accommodations for competitors and staff members. A town official has voiced concern that the facilities could rust and require repair when construction work resumes.

One common challenge for most Olympic venues will be how to avoid operating losses after the games. Many past Olympics have produced white elephants that kept bleeding red ink.

The city has spent 137.5 billion yen to build six new facilities but estimated in 2017 that only one -- Ariake Arena -- will be able to earn a profit after the summer games.

The arena plans to host 10 major international sports events per year, including the FIVB Volleyball World Cup, as well as concerts and other events. The metropolitan government plans to sell a 25-year operating license to a private business for 9.4 billion yen and expects to earn 356 million yen in annual profits.

The Tokyo Aquatics Centre, also in Koto Ward, is projected to incur annual costs of 300 million yen for water, fuel and lighting and lose 638 million yen a year. The canoe slalom center and the nearby Sea Forest Waterway, a seafront venue for rowing and canoeing events, are expected to lose more than 100 million yen annually.