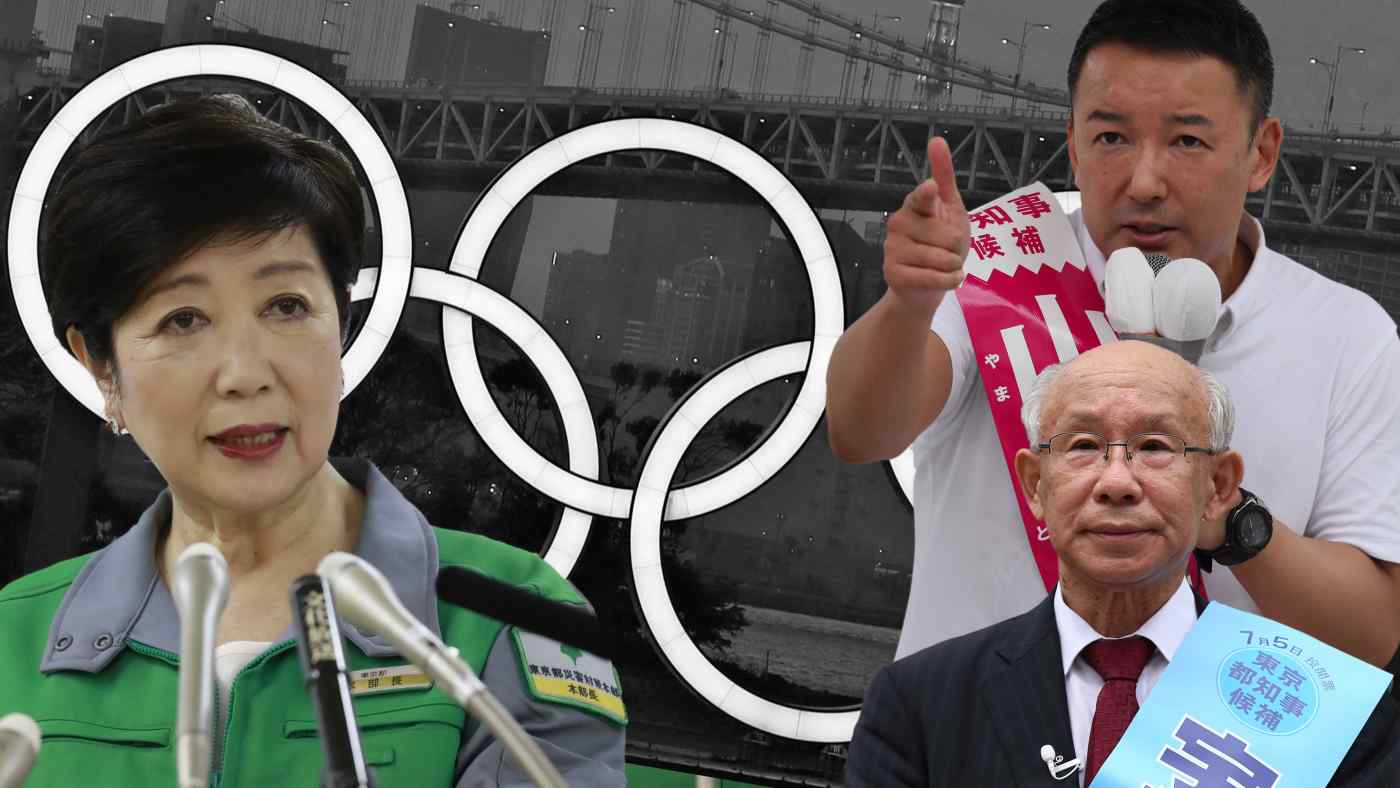 TOKYO -- The Summer Olympics will loom large over Sunday's gubernatorial election in Tokyo, where challengers to incumbent frontrunner Gov. Yuriko Koike have accused her of favoring the expensive event over support for the coronavirus-hit economy.

Koike, who leads in opinion polls by a wide margin, stood by her government's preparations for the games in an online debate on Saturday, framing the issue as a contest among international cities against the coronavirus pandemic.

"As China will make an all-out national effort for the [2022] Winter Olympics in Beijing, we need to demonstrate our victory in fighting the coronavirus," Koike said.

"We have to consider the money we have spent" on preparing for the games, now set for 2021, Koike added.

But her challengers see things differently. Former actor-turned-politician Taro Yamamoto of the anti-establishment Reiwa Shinsengumi party has called for canceling the Olympics until a COVID-19 vaccine is developed, saying "there is no guarantee of holding the event safely in the absence of a miracle drug."

The 1.35 trillion yen ($12.6 billion) budgeted for the Olympics should be used to support Tokyoites whose lives have been upended by the pandemic, said Yamamoto, a former upper-house lawmaker.

Another candidate, Kenji Utsunomiya, a former president of the Japan Federation of Bar Associations, said the Tokyo government should cancel the games if health experts recommend such a move.

Taking issue with the massive cost of hosting the games, Utsunomiya said funds freed up by a cancellation would be better spent on helping citizens. The lawyer is backed by the Constitutional Democratic Party of Japan and other national opposition parties.

The yearlong postponement of the Tokyo Olympics is estimated to require an additional 300 billion yen to cover venue rental fees, higher labor costs and measures to prevent COVID-19 infections.

The International Olympic Committee, the metropolitan government and the organizing committee are discussing ways to cut costs. But a person involved in the event said Tokyo will likely shoulder "an appropriate financial burden as host city."

Taisuke Ono, a candidate backed by the conservative Nippon Ishin no Kai party, has called for Tokyo to negotiate with the IOC to host the games in 2024.

Koike's opponents see the issue as a way to attack the incumbent's record by accusing her of prioritizing the games at the expense of fighting the virus.

The governor held her first emergency press conference on the COVID-19 outbreak on March 23, the day before the Olympics were officially postponed. Infections in Tokyo later began to increase sharply. Critics say the government should have taken action sooner.

A Nikkei survey conducted from June 19 to June 21 found that 46% of respondents wanted the Olympics to be scaled down, while 43% said cancellation was unavoidable. Only 8% called for holding the event in its entirety.

The number of anti-Koike votes in the coming election will not only reflect on the governor's leadership, but also offer a clue on the level of support for the games.

"The debate in the Tokyo gubernatorial election will become a key factor to determine the outlook for the Olympics," said Kazuhisa Kawakami, professor of political psychology Reitaku University.