Tokyo's COVID-19 situation prior to the Olympics: Five things to know

Despite progress in vaccination, political and delta risks weigh on leaders Olympic athletes and officials have been asked to stay in a "bubble" to minimize the risk of spreading COVID-19 among the public in Japan. (Source photos by Yo Inoue and Koji Uema)
RURIKA IMAHASHI, Nikkei staff writerJuly 14, 2021 15:01 JSTUpdated on July 14, 2021 17:14 JST | Japan
CopyCopied

TOKYO -- In the run-up to the long-awaited opening ceremony to the Olympic Games on July 23, the final countdown enters single digits on Wednesday. Some 15,000 athletes and 53,000 officials from over 200 countries are arriving in Japan for the Olympics and Paralympics.

The COVID-19 pandemic still presents a serious threat, and last weekend Prime Minister Yoshihide Suga declared a further state of emergency in Tokyo. Among other things, that means the first Olympics ever to be postponed for a year will now be held without spectators. The Olympic Village in Tokyo's Harumi bay area has opened without fanfare.

Over the past 16 months, organizers have maintained that the games can be held in a "safe and secure" manner. International Olympic Committee President Thomas Bach has repeatedly described Tokyo as being the "best-prepared host ever." Can they really prevent the games from becoming a superspreader event? The true test is about to begin.

Here are five things to know about Tokyo's COVID-19 situation ahead of the Olympics.

What is the current COVID-19 situation in Tokyo?

A state of emergency will remain in place in Tokyo from July 12 to August 22, covering the full period of the Olympic Games, which end on Aug. 8.

Hospital bed occupancies in the metropolitan area were also down from over 80% in January to 30% this month.

These improvements are considered to be largely due to the vaccine rollout among the elderly, who are more likely to suffer severely from COVID-19. In Tokyo, half the people aged 65 or older are already fully vaccinated, and 15% of all Tokyoites have been vaccinated twice. 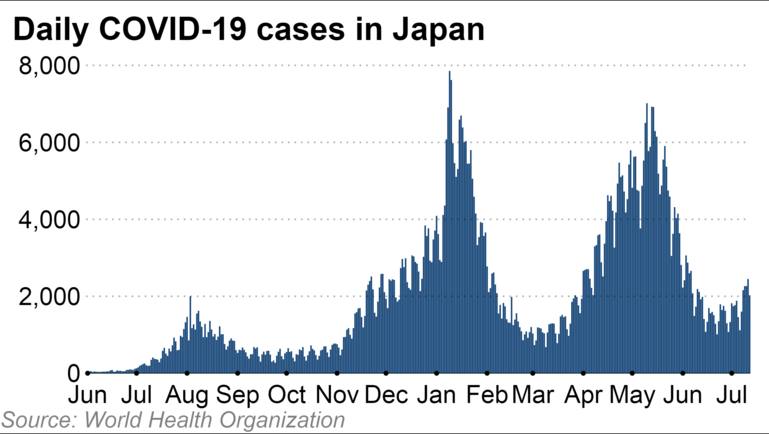 What does a state of emergency mean in Japan?

Japan's fourth state of emergency has dealt another severe blow to the economy. The Nomura Research Institute estimates that the economic loss to Tokyo alone will be 982 billion yen ($8.9 billion).

The state of emergency has not lifted support for Suga's government. A recent opinion poll by the Yomiuri Shimbun found that cabinet approval had fallen 12 points in Tokyo to 28% since a May survey.

Ahead of the general election, which is likely to be held in the autumn, Suga's weakened position may well influence decisions he makes for an economic stimulus.

Masamichi Adachi, chief economist in Japan UBS Securities, predicted that after the ruling Liberal Democratic Party did unexpectedly badly in the July 4 Tokyo Metropolitan Assembly election, the Suga administration is likely to announce more generous economic measures ahead of the election.

What steps are organizers taking to minimize the COVID-19 risk?

Last year, organizers in Tokyo were aiming for "safe and secure" games without vaccination as a prerequisite for attendance. But the narrative had changed, and vaccines have become vital to securing public support.

Over 80% of the athletes will be fully vaccinated on arrival, and the IOC has provided Japan with 40,000 Pfizer doses to inoculate athletes and officials as required.

The visiting athletes and officials will be told to stay in a "bubble" to minimize contact with locals. They will be subject to a three-day quarantine upon arrival and daily COVID tests. Until two weeks after their arrival, they can only go to a limited number of places.

Tokyo 2020 has warned that rule breakers will face consequences, including loss of accreditation or even deportation.

However, some athletes have complained that the countermeasures are insufficient. Zhang Xiaodong, chair of China's Yachting Association, told Chinese media about her concerns that sailors will be staying in the same hotel as domestic tourists, and mixing with them in the lobby and restaurant.

Those athletes who come into close contact with someone with a confirmed positive test are allowed to compete, depending on the circumstances. The Playbook says: "The decision on applicable measures will be made on a case-by-case basis and will take into consideration the likelihood of you spreading the virus."

What impact will the pandemic have on events?

The Olympics will be held without spectators in most venues except Miyagi and Shizuoka prefectures in the country's north, where cycling and football events are scheduled.

Under the state of emergency, audiences at other large events in Tokyo -- such as music concerts -- are limited to 50% of capacity and a maximum of 5,000 people. Venues must also close by 9 p.m.

A quasi-state of emergency will remain in place in Tokyo's neighboring prefectures, including Saitama, Chiba, and Kanagawa, as well as Osaka until Aug. 22. The spectator cap will be 5,000 in these places over the period.

Despite capacity restrictions and other countermeasures, some organizers have been forced to cancel events. Last week, organizers of Rock in Japan Festival 2021, a music festival in Ibaraki prefecture next month, cancelled after local doctors called on them to reconsider.

The spectator restrictions are intended to counter the spread of infections. Shigeru Omi, the Japanese government's top medical adviser on COVID-19, said the Olympics attract "special" attention and would be likely to trigger increased movements of the population.

The fast-spreading delta variant is also a concern. "The delta strain is said to be 1.5 times more infectious than the alpha strain, and there is concern over its rapid spread," Suga said on Thursday, warning that Tokyo's rise in infections could spread nationwide.

What is the likely legacy of the first pandemic Olympics?

The Olympic Games have been steadily getting bigger and bigger. There will be a record 33 sports and 339 events in Japan. The increased numbers of events, athletes and officials raise costs and personnel. Only wealthy cities come equipped with enough accommodation, transportation and venues to host the world's biggest sporting event.

For the following 2024 games, only Paris and Los Angeles vied to be host. Paris was selected for 2024, and Los Angeles will have the 2028 Olympiad. The IOC will confirm Brisbane as the 2032 summer host next week. No other cities have shown interest.

Apart from the economic benefit, the pandemic Olympics should remind everyone of core value of this sporting festival of peace with increased focus on actual sports and athletes.

When the pandemic broke out, organizers spoke of a "simplified Olympics," and trimmed unnecessary events and personnel in line with COVID-19 countermeasures. For example, the number of participating officials was reduced to 53,000 from nearly 180,000.

The Tokyo Games have already demonstrated the enormous risk a host city is exposed to by an unexpected disaster that raises political risk and courts economic disaster. This shadow will hang over all future Olympiads.