Celebrations in Fukushima muted by COVID-19 and empty stands The Olympic torch will travel through 859 cities and towns across Japan in 121 days starting Thursday, marking the point of no return for the troubled summer games. (Pool photo)
FRANCESCA REGALADO and RURIKA IMAHASHI, Nikkei staff writersMarch 24, 2021 23:29 JSTUpdated on March 25, 2021 10:59 JST | Japan
CopyCopied

FUKUSHIMA, Japan -- The torch relay for the 2020 Summer Olympics in Tokyo began on Thursday, a year and a day after it was originally scheduled, officially starting the clock on Japan's ill-fated summer games.

The torch relay will pass through 859 cities and towns across Japan in 121 days. It will reach the National Stadium in Tokyo on July 23, the day of the opening ceremony of the XXXII Olympiad and 2020 Summer Paralympics.

To prevent COVID-19 infection, organizers want people to spectate on television and the internet rather than gather along the route. Runners have also been asked not to dine out for two weeks in advance of their stints.

Thursday sets a mournful tone for the first Olympiad to be held during a pandemic. There will be no foreign spectators after the Tokyo 2020 organizers decided over the weekend to ban all visitors from overseas except participants.

Prime Minister Yoshihide Suga is skipping the ceremonies today after deciding against the two-hour trip from Tokyo as a coronavirus precaution. Tokyo 2020 President Seiko Hashimoto, Tokyo Gov. Yuriko Koike and Olympic minister Tamayo Marukawa are presiding in his place. Tokyo 2020 President Seiko Hashimoto, left, looks on as actor Satomi Ishihara, center, and Paralympian Aki Taguchi light a cauldron on the first day of the torch relay on March 25.   © Reuters

"About a year ago at the Olympiad in Greece, the flame was handed over to Japan. The flame didn't lose hope and now it's blooming like the cherry blossoms," Hashimoto said in a Thursday morning ceremony to start the relay.

Japan has sustained a massive loss after investing seven years and over $12 billion in the games.

Progressing over the weekend from Fukushima to Iwate and Miyagi prefectures, the relay is one of the last chances for the Tokyo 2020 organizers to win the Japanese public over to the pandemic-stricken games.

A weekend poll by Kyodo News showed only 23% support for continuing with the Olympics this summer. Most Japanese feel the games should be postponed again or canceled altogether. 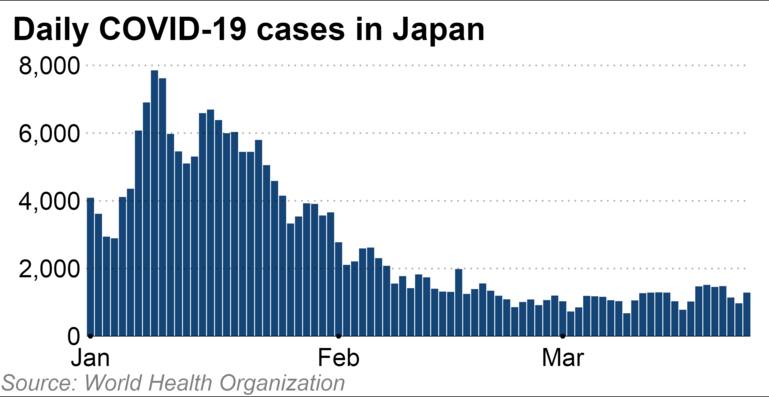 For the people of Fukushima, however, the so-called "Reconstruction Olympics" shine a rare international spotlight on their community's recovery from a devastating tsunami and nuclear disaster.

"'Reconstruction Olympics' has always been the theme for us," said Koike in her remarks, adding that without reconstruction "the games cannot be successful."

The region has struggled to raise its population back to pre-disaster numbers, attract tourists wary of the nuclear exclusion zone, or export products to countries worried about radiation.

Mineo Suzuki, 73, the oldest torchbearer on Thursday, is dedicating his run to his granddaughter in Tokyo, who he has not seen since the pandemic began.

"I would like to have a strong and enjoyable run with the feeling of being a representative of the region in my heart," he said.