Tweets in favor of Tokyo Olympics come to outnumber negative ones

Japanese public opinion has shifted since opening ceremony of Games The opening ceremony on July 23 was a turning point for the Olympics' popularity in Japan.   © Reuters
Nikkei staff writersJuly 29, 2021 16:22 JST | Japan
CopyCopied

TOKYO -- An analysis of messages posted on Twitter about the Tokyo Olympics reveals how greatly Japanese public opinion has changed since the opening ceremony on July 23, as tweets favoring the event have come to outnumber unfavorable ones prompted by scandals and rising COVID-19 cases.

Nikkei analyzed messages posted on Twitter using NTT Data's Nazuki no Oto linguistic analysis system. Sampling 400 tweets that included the word "Olympics" per hour, Nikkei divided them into "positive" or "negative" to the Tokyo Games based on the analytical tool's definition.

Positive comments, such as "They are enjoyable no matter what people said," began to increase when the softball opening round got underway on July 21. The number of positive tweets started to outnumber negative messages on July 23, when the Japanese Air Self-Defense Force's Blue Impulse aerobatic team flew over central Tokyo in the daytime and the opening ceremony of the Games was held in the evening.

The number of messages that included "Olympics" topped 4.3 million on July 23, a 2.4-fold increase from the previous day. During the hours of the opening ceremony, positive tweets outnumbered negative ones by anywhere from 1.5 to as much as 2.1 times.

In the week through July 27, table tennis player Jun Mizutani was the Japanese athlete most frequently tweeted about, followed by his mixed doubles partner, Mima Ito, and skateboarder Yuto Horigome, according to Twitter Japan. 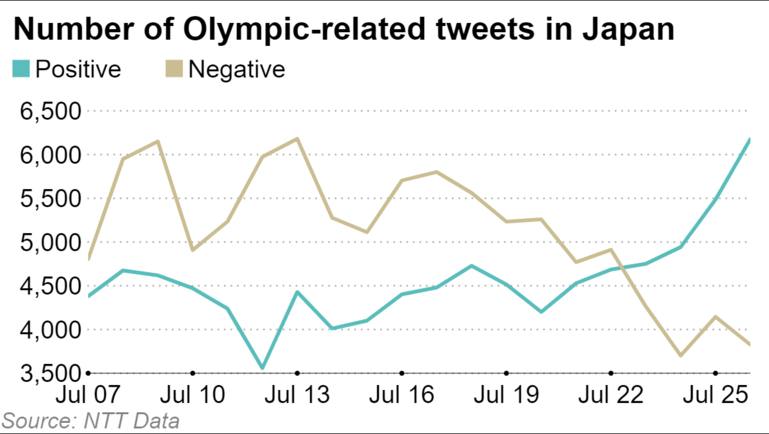 Similar trends were observed in other indicators.

Water consumption in Tokyo's 23 wards dropped by up to 10% from the recent Friday evening average after the opening ceremony began at 8 p.m., according to the Tokyo Metropolitan Government's Bureau of Waterworks, then jumped 25% soon after the ceremony ended at 11:57 p.m., suggesting that Tokyoites delayed taking baths and using the toilet so they could watch the event.

Viewers paid more or less attention to particular performances during the opening ceremony, according to TVision Insights, a Tokyo-based company that analyzes the quality of television viewing. It examined how carefully performances were watched during the ceremony, aired by public broadcaster NHK, and found that the highest ratio of careful watchers to all viewers rose to 32.4% at 8:21 p.m., when actor and dancer Mirai Moriyama gave a dance performance.