TOKYO -- With less than a week to go before international soccer and softball teams kick off the Tokyo Olympics on July 21, organizers and officials are still scrambling to cover their bases in the event of a coronavirus outbreak at the Games, including possibly giving two teams a silver medal in the same event.

As much of the world continues to grapple with daily COVID-19 infections, Olympics officials are coming up with contingencies for holding the Games during a pandemic, creating an unprecedented challenge.

According to the playbook compiled by the International Olympic Committee and the Tokyo organizers, athletes and coaches are required to take daily saliva tests throughout the event. These tests usually produce results in 12 hours, meaning athletes can compete in their events as long as they test negative the day before or the morning of.

Those with positive or inconclusive results undergo a nasal PCR test, which has a turnaround time of three to five hours, at an outpatient facility within the Olympic Village.

If they test positive here, they are required to withdraw from their events. Athletes in these cases will be marked as "did not start," and will not be disqualified as would be the case in if they tested positive for performance-enhancing drugs or another scandal.

What happens to those in close contact with an infected individual is less clear. Participants flagged by the Japanese health ministry's COCOA contact-tracing app will be required to immediately undergo a PCR test. To continue competing, they need permission from an expert team, permission from their international sport federation and consistent daily negative PCR tests.

But the playbook also says that measures involving such cases will be determined on a "case-by-case basis," leaving uncertain when exactly these athletes will be cleared to compete.

"The best scenario is for nobody to test positive," the All Japan Archery Federation said. 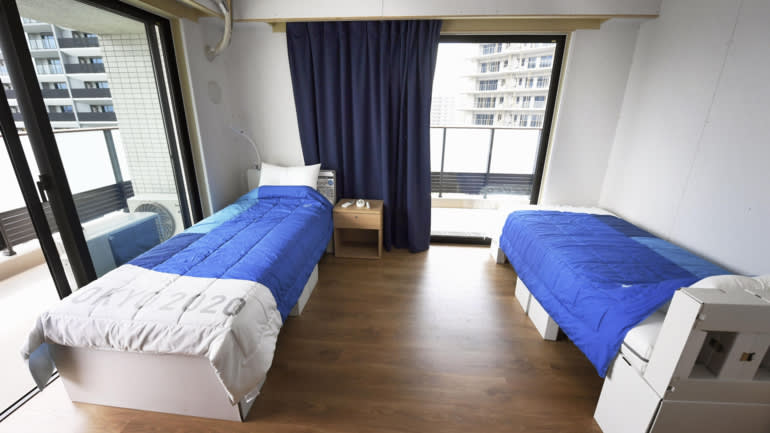 Extra precautions are being taken on the ground to minimize infection risks. Two to eight athletes will be sharing a room in the Olympic Village. The Japanese handball team has decided not put players of the same position in the same room, over worries that the entire team may be unable to compete if one goalie tests positive and its only other goalie comes in close contact.

Japan's two male and two female trampoline athletes will share rooms, due to how they were allocated. Two substitutes, instead of the usual one, will be standing by outside the Olympic Village just in case.

Fears of an infection cluster also loom over the Games' preparations. The IOC on Saturday announced what will happen should individual athletes or entire teams are knocked out the competition due to the coronavirus.

If an athlete drops out in individual, tournament-style events -- such as judo, boxing and tennis -- their opponent would win the match by default. For track, swimming, canoe and boat events, the next most eligible competitor will take their place. The Japanese and Mexican softball teams play an exhibition game in Takasaki on July 9. Under coronavirus-related regulations, two teams could potentially win the silver medal in the sport.   © Kyodo

One of the biggest concerns of organizers is that a team could suffer from a coronavirus outbreak just before playing a final match. In softball and rugby sevens, the team that lost to the withdrawing team in the semifinals will take its place. Both the second-place team and the team that withdrew will be awarded silver medals.

In basketball, on the other hand, the final match will be canceled, with the withdrawing team receiving silver and their planned opponent the gold.

The Olympics is the biggest international event for many sports, and their overseeing federations are eager to guarantee a grand finale. But they also need to ensure that the athletes and teams are assessed fairly based on their own performance, and the balancing act between the two have led to diverging responses depending on the sport.

It is also unclear whether athletes and teams that lost once can maintain their morale and continue training on the off chance they are called to compete again. As the first ever Olympics to be held in the midst of the coronavirus pandemic, organizers still face mounting challenges to ensure the Games' success.