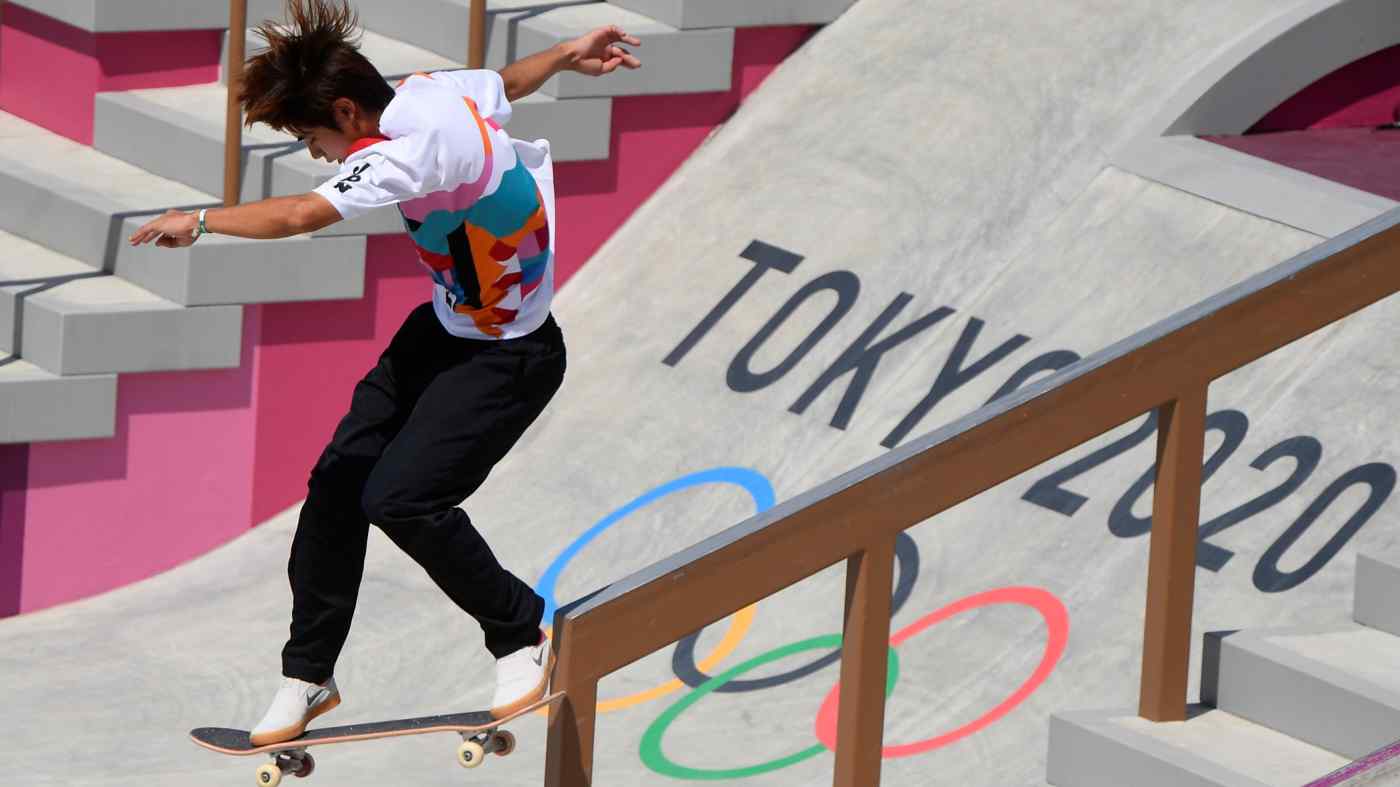 TOKYO -- Alongside traditional favorites like track and field and gymnastics, the Tokyo Olympics are drawing global attention with new "urban sports," including skateboarding, sports climbing and BMX freestyle.

These sports are especially popular with young people and allow even teenage athletes to find sponsors and travel internationally -- without coaches hovering nearby. They have the potential to reshape the image of sports, whose "win at all costs" ethos and rigid hierarchies are a turnoff for many youth.

"I want to win a gold medal with my own good performance," said Yuto Horigome, 22, at an online news conference in June, a month before he won the gold medal in men's skateboarding on July 25. In the background were the names of his sponsors, including Japanese electronics maker NEC and Chinese e-commerce leader Alibaba.

Horigome started skateboarding at age 6 and traveled to the U.S. by himself after graduating from high school. He became the first Japanese to win the top-level professional skateboarding tour, Street League Skateboarding, and has won many other titles. Last month, Horigome won his first world championship.

In addition to prize money, Horigome raises funds from 11 corporate sponsors. In October last year, he bought his own home in Los Angeles, equipped with a training facility.

"Yuto must be as famous as [Major League Baseball player] Shohei Ohtani in the U.S." said a Japanese skateboarder who is close to Horigome. Yuto Horigome holds up his gold medal after winning the men's skateboarding final in Tokyo on July 25.   © Reuters

U.S. skateboard star Nyjah Huston, 26, who also took part in the Tokyo Olympics and was selected by Forbes magazine as one of its "30 Under 30" list of influential young people in 2019, reportedly earns $800,000 a year. Top skateboarders are gradually becoming as well known as baseball players and other big-time professional athletes.

Unlike those sports, however, skateboarding grew up independently of things like physical education curricula, or government financial support. Horigome has no coach and honed his skills at a park near his home. Skateboarding, with its free-spirited culture, appeals to the "digital generation," which is the cornerstone of its growth as a competitive sport.

Skateboarding is very much at home on social media. "It's important to record videos [of my skateboarding] on the streets," Horigome said. He routinely shoots videos of new tricks and posts them to his more than 700,000 Instagram followers. This gives Horigome's fans the chance to learn from the master, fueling the dreams of the next generation of would-be skateboard stars.

Urban sports competitions are also growing in popularity. The music and food stalls at these competitions create an outdoor festival vibe. Launched in 1995 by U.S. sports network ESPN, the X-Games, which feature a number of "extreme sports," attracted close to 300,000 live spectators and 63 million viewers in over five days at its peak.

The International Olympic Committee has taken notice and adjusted its lineup of events accordingly. Snowboarding was introduced at the Winter Olympics in Nagano in 1998. Snowboarding played a big part in attracting 1.92 billion viewers the Pyeongchang Games 2018. The IOC has added new events to the Summer Olympics, too, introducing skateboarding and sports climbing in Tokyo. It plans to include break dancing at the Paris Games in 2024. In Tokyo, the new sports are being held at temporary seaside venues. They are relatively inexpensive events to stage, which is another advantage of urban sports, and gives the IOC and potential host cities more reason to pay close attention.

Companies and local governments also have high hopes. Speaking of sports climbing, an official with Mitsui Fudosan, a Japanese real estate developer, said: "It is a competition that is popular with children and young people, which is in line with our company's vision of creating family-friendly neighborhoods." The company has sponsored the Japan Alpine and Sport Climbing Association since 2016, has held five sports climbing workshops, and installed permanent climbing walls at two of its commercial facilities to attract visitors.

A permanent BMX track opened in May in Sakai, Ibaraki Prefecture, north of Tokyo. The world-class facility is operated by Hurricane, organizer of the FISE and designer of the BMX facility for the Tokyo Olympics. "If you hold a [BMX] competition, children will gather here. I want to foster [athletes] who will be able to compete worldwide," enthused Masahiro Hashimoto, Sakai's mayor. The BMX Freestyle event is also an Olympic sport for the first time at the Tokyo games.   © Reuters

Morinari Watanabe, an IOC member and president of the International Gymnastics Federation, believes urban sports have high potential. "The Sports we have had up to now tend to focus on results. [Athletes in new sports] are game-changers who press for reform," said Watanabe, who is also chairman of the Japan Urban Sports Support Council, which hosted the FISE event in Hiroshima. He expects the new events to bring a new spin to the sporting world, which has been plagued by issues such as abusive coaching and athlete burnout.

The Tokyo Olympics are being held without spectators due to COVID-19, which has dampened the festive atmosphere somewhat. Nevertheless, urban sports are drawing a new and different sort of Olympic fan. We can expect to see more skateboarders, BMX riders, and climbers bringing home gold, sliver and bronze and helping to reenergize the world's largest sporting event.