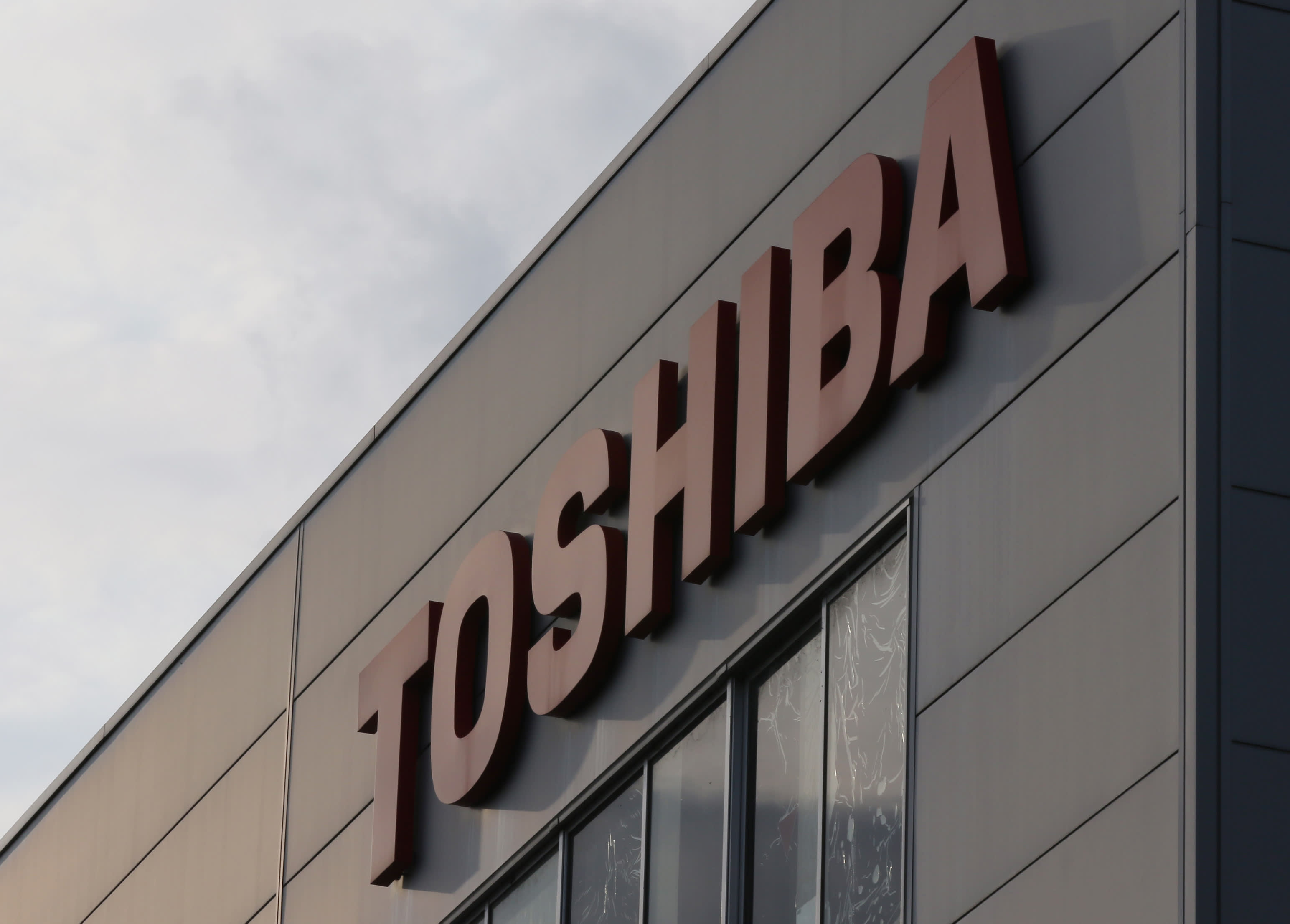 TOKYO -- Toshiba on Wednesday finally decided to sell its prized memory unit to a consortium led by U.S. investment fund Bain Capital, with South Korean chipmaker SK Hynix and Apple also on board. But the Japanese conglomerate faces a fresh set of challenges, including possible legal action and damage to key assets.

The chaotic, protracted bidding paralyzed Toshiba and sent employees heading for the exits. Rivals, meanwhile, have been busy setting up new factories.

Two such competitors, SK Hynix and fellow South Korean manufacturer Samsung Electronics, are adding capacity on the expectation that demand for memory chips will remain strong over the long term. Taiwan Semiconductor Manufacturing Co., the world's largest contract chipmaker, is also constructing new factories to meet an anticipated surge in demand from automakers looking to build self-driving cars. Meanwhile, Chinese competitors are honing their skills in line with the government's policy of developing the country's semiconductor industry.

Chip production equipment manufacturers have been struggling to keep up, eagerly waiting for Toshiba to reach a final agreement on the sale of its memory business.

"We will not be able to make deliveries by the end of the year if the situation remains unchanged," a sales representative from a maker of semiconductor production components told engineers at Toshiba's flagship chip plant in the central Japanese city of Yokkaichi in July. "We do hope [Toshiba] ... will promptly make a decision."

A major obstacle to the deal has been Toshiba's continued court battle with U.S. partner Western Digital, which has had employees on the front lines worried. "A delay in procurement of production equipment will make us less competitive two years from now," a Toshiba engineer said.

The tussle with Western Digital is also affecting the company's business in other ways. Before the start of teleconferences between Toshiba engineers and Western Digital subsidiary SanDisk, the Japanese side asks whether anyone from Western Digital is on the other end of the line. The meetings start only after Toshiba confirms there are only SanDisk engineers present, according to sources at the conglomerate.

The strained relations between Toshiba and Western Digital have grabbed headlines, but the Japanese company continues to crank out chips that can compete with those of Samsung thanks to ongoing cooperation with its American partner in design and development.

In June, however, Toshiba formally cut off access to joint-venture data for Western Digital employees and barred them from taking part in meetings on fears it would give them an unauthorized look at confidential information. The pre-teleconference questions are now an established ritual, but both sides know that Western Digital officials take part in the guise of SanDisk employees.

"More than 1,000 grown-ups pretend not to see," said a smiling Toshiba official. "This abnormal situation, though needed to preserve the development system, should be eliminated as soon as possible."

Adding to Toshiba's woes, rivals are starting to poach its engineers. When negotiations for the sale of Toshiba Memory got rolling in early spring, strangers began hanging around the south gate of the Yokkaichi plant, near the development section, in the early evening. They turned out to be headhunters looking to contact process engineers tasked with raising the yield of chip production.

In semiconductors, where one clever idea can dramatically improve chip yield and quality, the competition for talented engineers is intensifying. "We usually sort out candidates based on recommendations by former colleagues, or from a list of those who have published dissertations, and meet selected candidates to talk with them," said an official with one employment agency.

"Fees for successful recruitment of competent engineers are usually 40% of [the engineer's] annual income," said one headhunter. Referral fees for semiconductor engineers can run to 10 million yen ($90,522) per person.

Recruiters do not, as a rule, reveal their employers. But state-backed Tsinghua Unigroup of China is widely known to be on the prowl for Toshiba engineers. Chinese companies have replaced those in South Korea as buyers of Japanese talent.

With Chinese government backing, Yangtze River Storage Technology, a unit of Tsinghua, is building a huge memory chip plant in Wuhan, in east-central China, at a cost of more than 2 trillion yen. "We will need thousands of engineers by 2018," a Tsinghua official said.

Many such workers are jumping ship to foreign chipmakers, which are pouring funds into R&D.

"I can continue my studies," said a former NEC engineer who has been working for a Chinese semiconductor manufacturer for more than five years. "My former colleagues regard me as a traitor, but I have no regrets."

Japan's trade ministry is worried about an accelerating brain drain, although the trend is hard to spot in government statistics. Keeping sensitive technologies out of the wrong hands has been a ministry priority in the sale of Toshiba's chip unit, but this goal appears unrealistic.

Engineers at the Yokkaichi plant complain that people at Toshiba's Tokyo headquarters have no clue what is going on. If the company continues to make light of their concern, it runs the risk of losing skilled engineers to rivals who can offer better terms.

The ratio of job offers to seekers in the semiconductor industry has risen to 1.5 from 0.5 over the past three years. In other words, there are now 150 open positions for every 100 job seekers. "As restructuring has run its course at Japanese companies, the recruitment of workers will grow more difficult," said an official of employment agency Recruit Career.

Toshiba plans to expand the No. 6 building at its Yokkaichi plant, which is due to begin operating next year. But if it dithers further over the divestment of its memory chip unit, the plant could become less cutting-edge, hurting workers' morale. The world's second-largest manufacturer of flash memory chips is looking weaker all the time.

Asked about prospects for selling the company's memory device business, Toshiba executives invariably answer that they set no deadline "because it involves negotiation."

The struggling electronics maker has come close to nailing a deal for Toshiba Memory several times in recent months, but dug in its heels on each occasion, putting off decisions.

Management now faces criticism ranging from a lack of leadership to an inability to make critical commitments. Toshiba continues losing trust -- which had already fallen to a nadir after an accounting scandal -- and needs to rebuild it. In 2015, the company confessed to falsifying profits to the tune of more than $1 billion, and later revealed it faced a multibillion-dollar write down on its U.S. nuclear business.

The failure to lay out a vision for the future erodes not only public trust but employee trust as well. Sagging morale among workers who are thinking "enough is enough" may hinder competitiveness.

The interests of bank syndicates and the Japanese government also deserve blame for complicating and delaying the negotiations. But that does not change what Toshiba needs to do: reach a final agreement decision as soon as possible and get on with its reconstruction. Management cannot afford to say it has no deadlines.

Meanwhile, interested parties are considering having the company maintain a stake in Toshiba Memory, rather than divesting the unit entirely.

In February, Toshiba had planned to sell the entire stake, despite opposition inside and outside the company. Management at the time thought the memory device business, which requires large investments and whose earnings swing based on market fluctuations, would be too much of a burden to bear as Toshiba coped with a collapse in trust.

Toshiba Memory's operations remain brisk for now, but could encounter a downturn in the future, potentially throwing the parent into another crisis. Toshiba needs to carefully weigh the risk.

Seeking a path to the future

The conglomerate's April-June results, announced Aug. 10, showed a seemingly strong consolidated net income of 50.3 billion yen, but revealed a heavy reliance on Toshiba Memory. Infrastructure systems and solutions, which Toshiba has designated as its core segment after the planned sale of Toshiba Memory, produced an operating loss of 1.6 billion yen, hit by a drop in orders. The energy systems and solutions segment -- which includes domestic nuclear, thermal and hydropower and is slated for a spinoff in October -- chalked up an operating loss of 1.7 billion yen.

"The feasibility of [Toshiba's] rehabilitation plan is uncertain," said a person at one of Japan's big banks. "I'm wondering if the remaining businesses, such as the elevator business, may also be put on the chopping block eventually."

Though the infrastructure segment has strengths, including unique products and technologies, it carries the risk that decisions for withdrawing from unprofitable businesses may come too late.

Toshiba Tec, a subsidiary that sells retail point-of-sale cash-register systems, recently joined the infrastructure segment. During a company briefing for analysts in late August, participants asked about the unit's relationship with the parent. Management seemed unclear how it would realize synergies with other Toshiba group members and achieve growth. The company needs to work out further details of its business plan to convince shareholders and other stakeholders.

Toshiba has nascent technologies with the potential to grow into major earners, just as flash memory devices did. These include magnetoresistive random access memory, or MRAM, which excels in processing speed and memory performance; a quantum cryptographic communication system, which enhances information security; a hydrogen production system; and a general-purpose system infrastructure for corporate-use "internet of things" technology.

Considering that it took more than 10 years for flash memory devices to evolve into the company's core business, Toshiba cannot waste time if it intends to forge a path to future growth.