TOKYO -- Toshiba will accelerate its efforts to diversify its board members and enhance its governance in a bid to regain shareholder trust in the wake of a probe that found the company colluded with a government ministry to pressure activist shareholders.

On Monday, board chairman Osamu Nagayama told reporters that the company aims to reassemble its board to include more foreign directors and new voices, preferably those who have management experience, with the aim to "strengthen the board."

"We will hold discussions with shareholders and take their opinions into account during the process to reconstruct the board," Nagayama said, explaining that an extraordinary general meeting will be held at some point to elect new candidates.

The probe, conducted by three lawyers, revealed how Toshiba's management colluded with Japan's Ministry of Economy, Trade, and Industry in an attempt to pressure activist shareholders. The probe concluded that Toshiba's annual general meeting last year was "not fairly managed."

Following the probe, Toshiba on Sunday held an emergency board meeting and removed two of its directors from its list of board nominees for this year's annual general meeting, scheduled to take place on June 25. 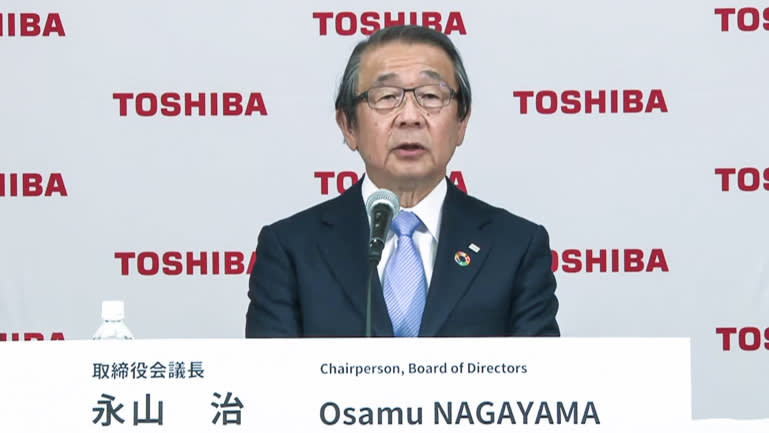 "Given the investigation report, it was decided that it would have been difficult to receive understanding from shareholders regarding [Junji] Ota and [Takashi] Yamauchi's reappointment," Board Chair Osamu Nagayama says. (Screenshot from Toshiba's YouTube page)

"Given the investigative report," Nagayama said, "it was decided that it would have been difficult to receive understanding from shareholders regarding Ota's and Yamauchi's reappointments."

Ota and Yamauchi were a part of the audit committee when Toshiba conducted its own review of the July shareholders meeting, which found no problems.

However, in a statement last week, four of Toshiba's outside directors said the "internal investigation made by the audit committee was not transparent to us, and the information we were provided with was presented in a highly misleading way." The directors called for a board shake-up.

Nagayama said that following Sunday's emergency board meeting, the four directors have expressed their support for its decision to reassemble and strengthen the board.

Along with Ota and Yamauchi, two Toshiba executives that were named in the probe will also step down at this month's AGM.

Toshiba now has 11 board member candidate nominees, including President and CEO Satoshi Tsunakawa and board chairman Nagayama.

The probe said that Toshiba and METI tried to prevent Effissimo Capital Management, who is Toshiba's largest shareholder, from fully exercising its proposal at last year's shareholders meeting.

The company said it has yet to talk with Effissimo following the report.

Nagayama expressed positive thoughts on Tsunakawa, saying he is "trusted by stakeholders and has overcome difficulties in the past," which makes him "the right person to take the helm of the company."

In addition to reconstructing its board, the company will work on rebuilding its executive committee. The drafting of a succession plan will be a top priority.

During the news conference, Nagayama criticized Kurumatani, saying that "A somewhat adversarial relationship with shareholders has been fostered [through Kurumatani] which has caused the current situation."

He stated that Toshiba lacked governance, including in its relationship with METI as stated in the investigation, and noted that "the existence of Mr. Kurumatani was one factor that cannot be denied. Aside from his legal responsibility, we cannot ignore his role in causing the current management chaos and undermining the trust of shareholders."

Following the probe, Toshiba said it would conduct another investigation, with the help of third parties, to determine the root cause and where the responsibility lies.

METI has remained mostly silent, saying it would wait for Toshiba's response to the investigation before taking action.

Nagayama noted that the news conference will serve as a response. He stated his belief that a certain level of connection is necessary between Toshiba and the ministry, given the company's business in fields related to national security. "It appears from the report that there were very critical exchanges [of information]," he said, "and I must say the people involved lacked a sense of legal compliance."

Nagayama himself faces calls to step down as board chairman, with U.S. proxy advisory Glass Lewis urging shareholders to vote against him while some reports claim that Singapore-based 3D Investment Partners has demanded his immediate resignation.

Nagayama acknowledged that there are disapproving voices but said "Toshiba's stakeholders have been very worried during this time and the board must work to rectify the situation quickly."

"There are different types of responsibilities. One is to take responsibility for the situation and another is to fulfill one's responsibility." "I would like to focus on the latter," he said but added that his reappointment will be up to shareholders at this month's AGM.

Asked about the possibility of Toshiba delisting from the Tokyo Stock Exchange, Nagayama said, "There are currently no plans to delist following the investigative report." He added that the company in January returned to the first section of the TSE; its shares had been demoted to the second tier in 2017.

"If the board receives any proposals about delisting it will consider them," Nagayama said, "but as of now Toshiba, as a public company, will do its best to enhance corporate value."

Following Toshiba's response to the probe and explanation from Nagayama, the company's shares closed up 2.7% in Tokyo.