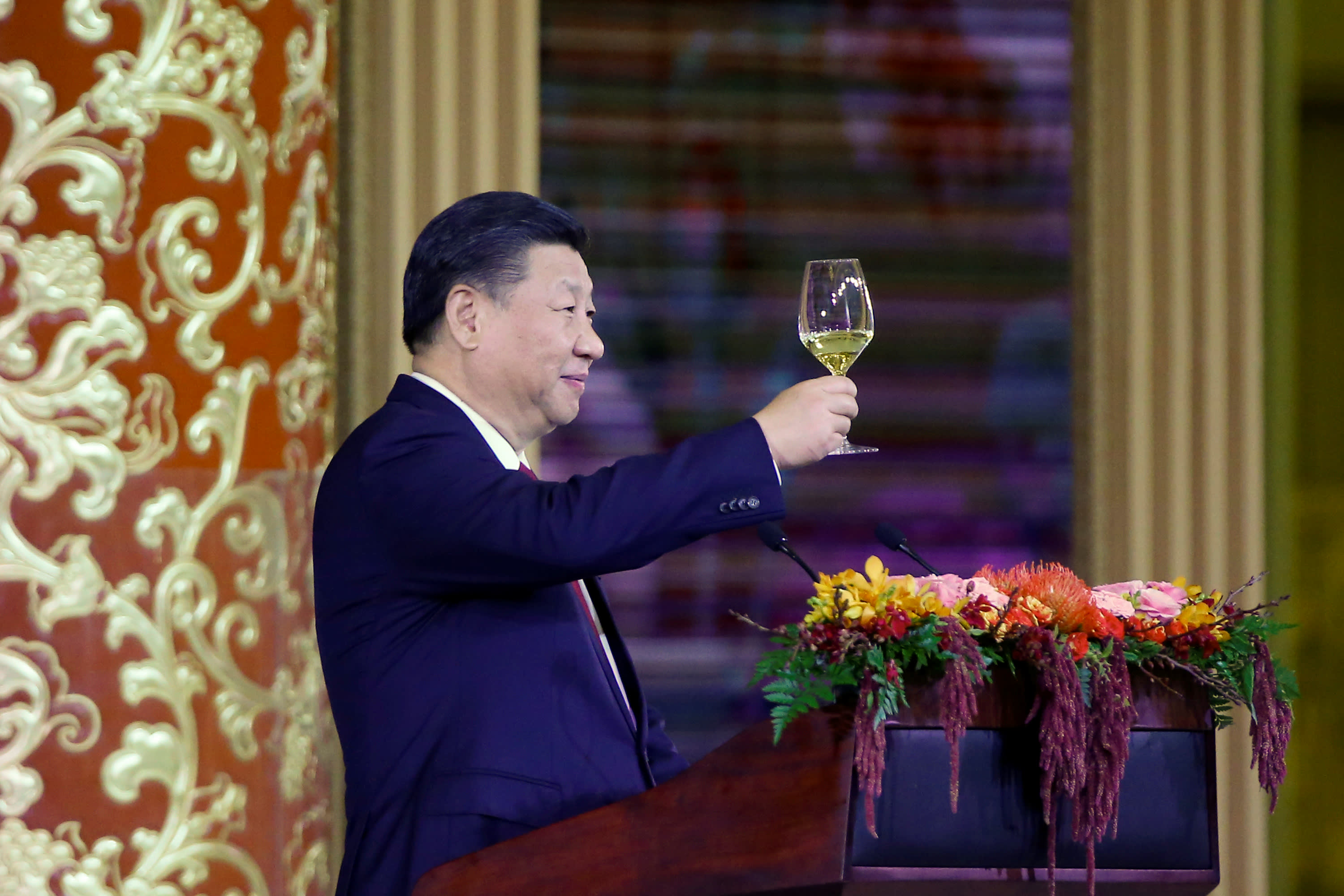 Chinese President Xi Jinping delivers a toast at a state dinner at the Great Hall of the People in Beijing on Nov. 9.   © Reuters
Politics

BEIJING -- With U.S. President Donald Trump's visit here this week, Chinese President Xi Jinping demonstrated growing confidence in his country dealing with the U.S. as a peer, using flattery and strategic cooperation to smooth over trouble spots like trade.

"There can be no more important subject than" China-U.S. relations, Trump declared at the outset of Thursday's summit. It would not be an exaggeration to say that Xi invited Trump to Beijing to elicit those words. 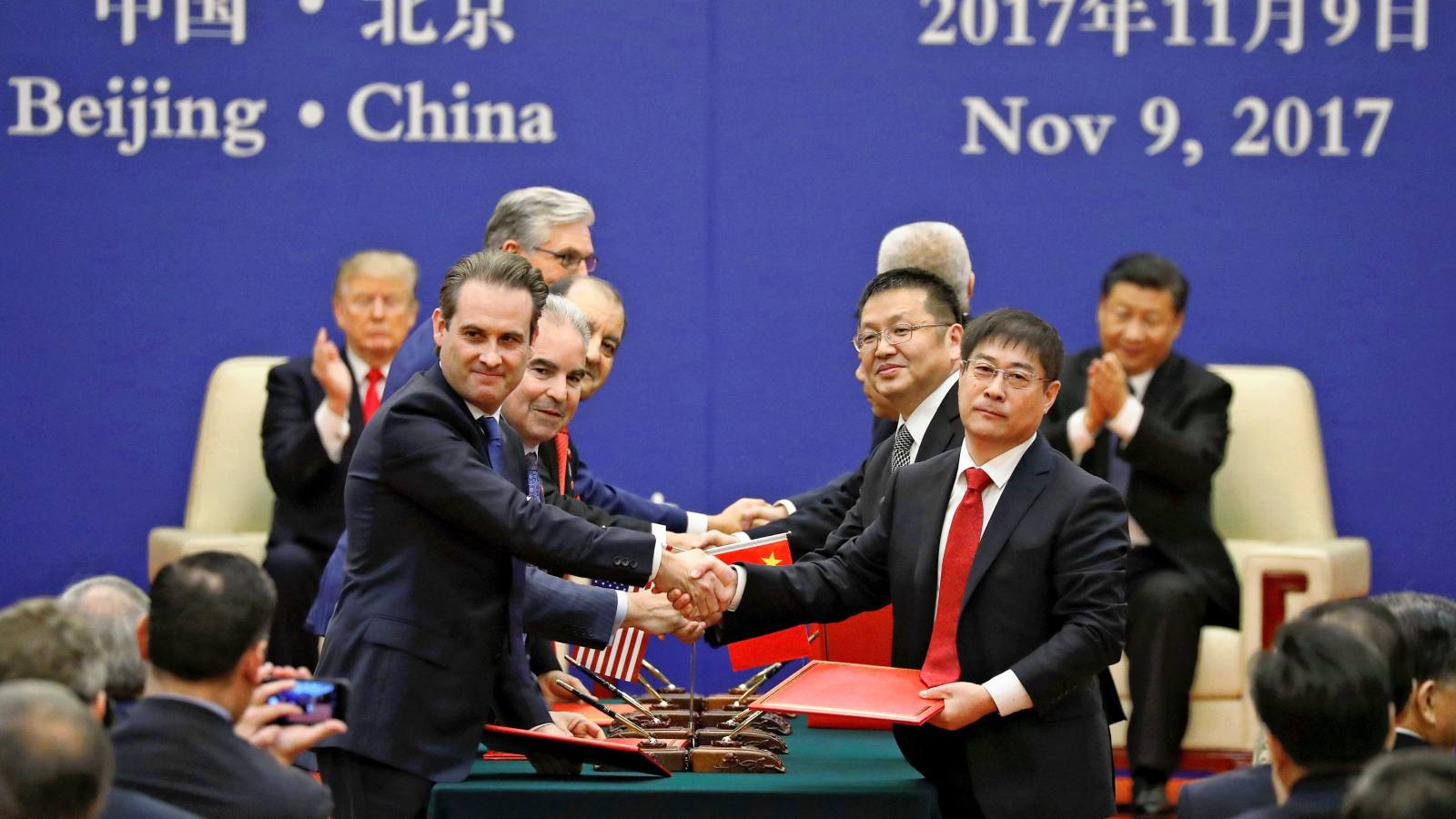 Trump, who had hurled invective at China over trade and currency issues, seemed to all but absolve Beijing of responsibility in a news conference after the summit. He instead pinned the blame on inaction by "past administrations," referring to predecessor Barack Obama.

Xi was solicitous of Trump almost to a fault before the summit. At a welcome ceremony at the Great Hall of the People, the Chinese leader -- who reportedly lacks a strong command of English -- chose to forgo an interpreter, instead using gestures to get his meaning across.

Trump and his wife Melania were also invited to dine at the Forbidden City, the palace complex that housed emperors during the Ming and Qing dynasties. This lavish show of hospitality seemed intended to compete with Trump's golf outing with Japanese Prime Minister Shinzo Abe earlier on the Asia tour.

Not long ago, this might have been criticized by some in the ruling Communist Party as unseemly pandering. Xi no longer has to worry about that, having stacked party leadership with loyalists since the party congress last month. The president has created an environment enabling him to focus on building China into a power that can stand shoulder to shoulder with the U.S. economically, militarily and culturally.

Doing so will require Washington's cooperation. Though sources of bilateral friction remain, such as the trade imbalance, Xi's basic strategy is to avoid direct confrontation. The roughly $250 billion package of trade deals announced at the meeting was part of this effort.

When Xi visited the U.S. in 2013, he told then-President Obama that "the vast Pacific Ocean has enough space for the two large countries of China and the United States." This was a call for a "new model of great-power relations" with Washington and Beijing steering the international order.

Not only did Obama reject the idea, but he also sought to contain China, concerned about the risks should Beijing grow too strong. He worked to "rebalance" U.S. foreign policy toward East Asia diplomatically and militarily, building a unified front with allies and pursuing the Trans-Pacific Partnership, a regional trade deal excluding China.

Trump has worked to dismantle this legacy. He withdrew the U.S. from the TPP soon after taking office, and rather than forging broader alliances in the Asia-Pacific region he has shifted focus to bilateral relationships. The president has also said little about topics Beijing would prefer to avoid, such as human rights.

This is ideal for Xi, under whom China is building its own sphere of influence. Japan and the U.S. are taking more interest in the Belt and Road Initiative -- a Chinese program to build economic corridors through Asia to Europe -- after initially keeping their distance. A growing number of developing countries see the authoritarian China as a model to follow in their own development.

Yet if the U.S.-China rapprochement fails to improve the trade imbalance or bring progress in dealing with North Korea, Trump could turn on Beijing again. When Xi said again Thursday that "the Pacific Ocean is big enough to accommodate both China and the United States," Trump did not respond.