In recent months, countries and companies across the region have been setting goals for reducing carbon dioxide emissions. China aims to achieve carbon neutrality, or net-zero emissions, by 2060. Japan and South Korea have resolved to get there by 2050.

"It's like waking up in the middle of the night, seeing your house on fire, then deciding to wait 10, 20 or 30 years before you call the fire department while labeling those trying to wake people up alarmists," she said.

Instead, Thunberg said, "What we need, to begin with, is to implement annual binding carbon budgets based on the current best available science." She said that while activists "welcome every single climate initiative, the proposals being presented and discussed today are very far from being enough." 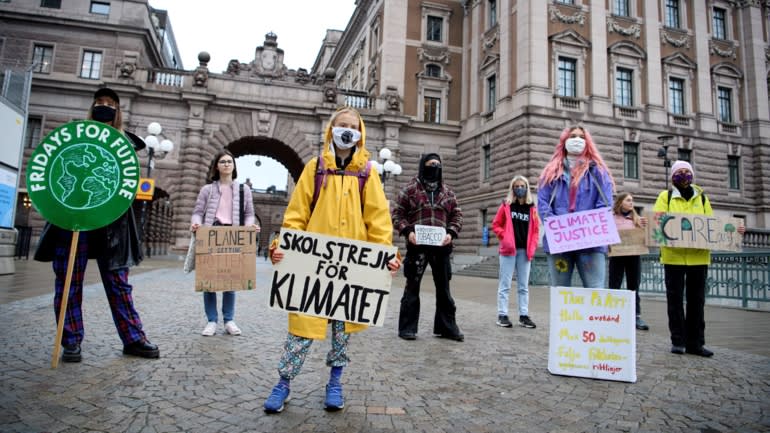 Government leaders speaking to the WEF largely focused on what they consider ambitious goals and their progress, while calling for international cooperation.

Huang Runqiu, China's minister of ecology and environment, on Wednesday reiterated the Xi Jinping government's goal of hitting peak carbon emissions by 2030 and neutrality by 2060. He emphasized multilateral cooperation, saying that "developed countries need to act first to roll out concrete measures and to effectively support the developing countries."

Governments are not the only ones in the spotlight. The WWF, a Switzerland-based nonprofit environmental organization, on Wednesday pointed out that Asia's asset managers lag behind their European counterparts when it comes to addressing climate change and nature loss through responsible investing.

It noted in a report on Wednesday that Asian investors' portfolio companies are especially susceptible. "Asia is particularly at risk, with many of the region's economies founded on industries like manufacturing, fisheries and agriculture. All of these depend on healthily functioning natural capital and are highly exposed to climate change," the WWF warned.

Davos panelists, too, touched on the role of investing. Tokyo Gov. Yuriko Koike, in a discussion on Wednesday, said her metropolitan government will promote "green financing" as it races to become Asia's financial hub.

"We are advancing initiatives that combine the environment and finance as measures to promote ESG investing," said Koike, using an abbreviation for environment, social and governance. She said the Tokyo Metropolitan Government became the first Japanese local government to issue what it calls green bonds. "We plan to make Tokyo a leading city in green finance. To do so we will build a system to attract capital for ESG investing from within and outside Japan."

Momentum for addressing climate change does appear to be picking up, with U.S. President Joe Biden ordering a return to the Paris Agreement framework on his first day in office and planning a climate summit in April. Climate is expected to be a major theme again when the WEF holds an in-person summit in Singapore in late May.