Five Davos takeaways, from China to COVID to capitalism The World Economic Forum held a full week of online meetings in place of its usual January summit in Davos, Switzerland. In May, it plans to hold an in-person meeting in Singapore.   © Reuters
Nikkei staff writersFebruary 1, 2021 16:25 JST | Singapore
CopyCopied

Chinese President Xi Jinping and Indian Prime Minister Narendra Modi were among the big Asian names who participated in the sessions, which set the stage for a planned in-person summit in Singapore in May.

The U.S. isn't buying the "multilateralism" Xi is selling

Xi's address was closely watched. The last time he appeared at the forum was in 2017, days before Donald Trump took office in the U.S. This time, he spoke via video days after Joe Biden moved into the White House.

The Chinese president did not name names but clearly rebuked Trump's policies. "To build small circles or start a new Cold War, to reject, threaten or intimidate others, to willfully impose decoupling, supply disruption or sanctions, and to create isolation or estrangement will only push the world into division and even confrontation," he said.

Xi said the way to solve the world's problems is multilateralism. "Let us all join hands and let multilateralism light our way toward a community with a shared future for mankind," he concluded. This call for unity did not appear to move the Biden administration, whose China policy remains hazy.

"Strategic competition with China is a defining feature of the 21st century," White House spokeswoman Jen Psaki said after Xi's remarks. She noted that China is growing more authoritarian at home and more assertive abroad, "challenging our security, prosperity and values in significant ways."

Singaporean Prime Minister Lee Hsien Loong, who is due to host the WEF in a few months, spent much of his time slot warning about the dangers of the U.S. and China failing to move relations toward "safer waters."

"Given the enormous stakes, difficult as it will be, it cannot possibly be too late for the U.S. and China to reset the tone of their interactions and avert a clash between them, which will become a generational twilight struggle," he said.

Lee voiced hope that the Biden administration would find a new approach. And he did not shy away from calling on China to change or "recalibrate," too.

WEF President Borge Brende, speaking with Lee, suggested the Singapore summit might just provide a venue for the two powers to meet.

China, Japan and South Korea all played up their goals of achieving net-zero emissions, or carbon neutrality. Beijing is aiming for 2060, while Tokyo and Seoul are shooting for 2050.

South Korean President Moon Jae-in vowed to "vigorously push ahead with carbon neutrality across all aspects of the economy and society, while fostering a low-carbon industrial ecosystem," in a speech that centered on efforts to fight inequality.

And Japanese Prime Minister Yoshihide Suga talked about how building a green society -- with a focus on the 2050 goal -- will create a new engine for economic growth. A ship belonging to environmental group Greenpeace sails through the Arctic Ocean. China, Japan and South Korea have all promised decarbonization to help address global warming.

None of this impressed 18-year-old Swedish climate activist Greta Thunberg.

Such goals are "vague, insufficient, hypothetical targets," Thunberg said in a video message to Davos, without singling out specific countries. "It's like waking up in the middle of the night, seeing your house on fire, then deciding to wait 10, 20 or 30 years before you call the fire department."

Instead, she argued for "annual binding carbon budgets."

COVID-19 vaccination campaigns are picking up speed in some countries and only just about to start in others. But a survey conducted by Ipsos for the WEF found Asian respondents were in far less of a rush to get inoculated than their Western counterparts.

Experts said the gap was likely due to a combination of distrust and a less acute sense of urgency, since Asia has generally fared better in the pandemic. Still, a return to economic normalcy will require widespread immunity.

India's Modi, for his part, vowed to help the world achieve that by increasing the supply of vaccines made in his country. 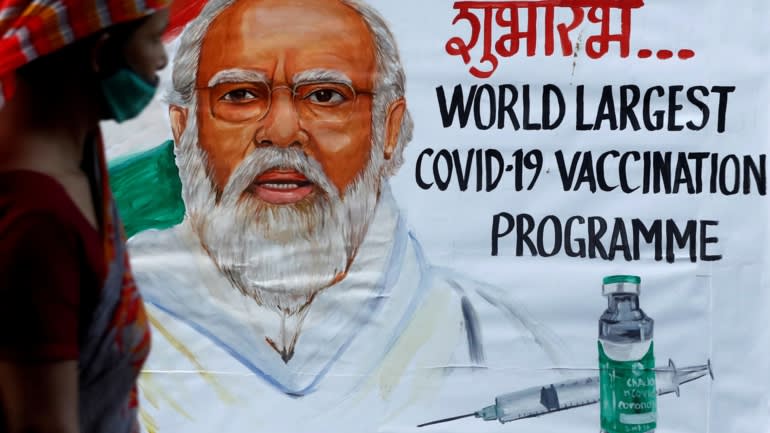 Indian Prime Minister Narendra Modi, pictured on a mural, is promising to supply more made-in-India vaccines to the world.   © Reuters

Over 60 global companies committed to what the WEF calls Stakeholder Capitalism Metrics. Just as they report their finances, multinationals like Sony and Unilever have pledged to report how they adhere to 21 core and 34 additional metrics.

The core standards pertain to issues like corruption, greenhouse gas output and pay equality. The idea, advocated by WEF founder Klaus Schwab, is that companies must consider not only their own shareholders but all stakeholders -- customers, employees, suppliers and local communities.

Over the years, the Davos elite and the very system of capitalism have come under fire as wealth gaps expand. COVID-19 and millions of job losses have also increased the tension between haves and have-nots. But the broad support for the metrics was billed as a turning point.

Brian Moynihan, chairman and CEO of Bank of America, said: "Those are major companies with $7 trillion market cap and millions of employees around the world which are saying, 'Hey, I will hold myself accountable to live up to this stakeholder capitalism" ideal.