With the pandemic entering its third year, what should we be paying attention to? 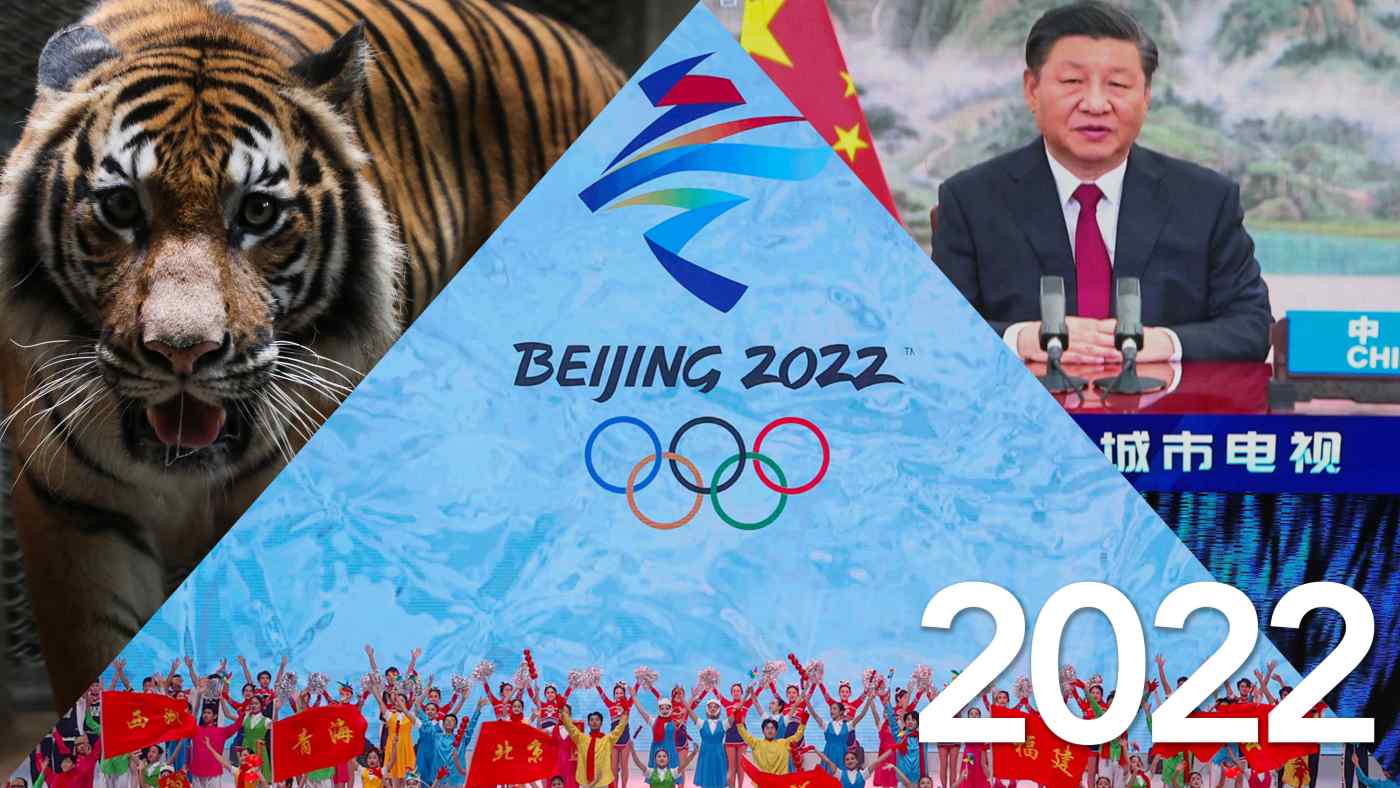 Among the events in Asia's calendar in 2022 are the Beijing Winter Games, the 55th anniversary of ASEAN, and the Chinese Communist Party's five-yearly congress, at which President Xi Jinping is expected to win another term.
January 1, 2022 17:14 JST | China
CopyCopied

Welcome to Your Year in Asia. While the world is still grappling with the coronavirus pandemic, other major events also fill the calendar for the region this year. Here's what awaits us in 2022.

The Asian mega trade deal known as the Regional Comprehensive Economic Partnership takes effect as the new year begins. RCEP encompasses 15 countries -- the 10 ASEAN member states, plus Australia, China, Japan, New Zealand and South Korea. Initially, the pact is expected to start among the 10 countries that have completed the ratification process, including China and Japan, eventually enabling more cross-border economic activities between the members.

After slipping in 2021's global rankings for initial public offerings, Hong Kong will seek to boost activity with a number of listing rule reforms. With the new year, Hong Kong Exchanges & Clearing will join the race to attract IPOs of special purpose acquisition companies to recapture flows now being lost to New York markets. Another rule change will ease the path for more "homecomings" by Chinese companies listed in New York by slashing minimum capitalization and listing history requirements.

Only workers who are fully vaccinated, or have recovered from COVID-19 within the past 270 days, will be able to enter Singapore workplaces. Unvaccinated staff will be allowed to work from home in the latest measure to encourage vaccination uptake. Hong Kong, meanwhile, will begin to bar the unvaccinated from restaurants, cinemas, gyms and libraries.

Beijing loyalists will be sworn in as Hong Kong legislators by Chief Executive Carrie Lam after a landslide victory in the city's first "patriots only" general election. The oaths will be taken under the Chinese national emblem, which has temporarily replaced Hong Kong's official emblem in the Legislative Council chamber.

After holding its first online-only event last year, the world's largest consumer electronics show will return in the flesh with more than 1,900 exhibitors, including Samsung Electronics, Sony and Intel, expected to showcase their latest devices and offerings. The show will feature a string of new categories including food tech, space tech and non-fungible tokens.

LG Energy Solution aims to raise up to 12.8 trillion won ($10.9 billion) on the South Korean stock market as global demand for electric vehicle batteries soars. The offering is poised to be the country's biggest IPO ever, more than doubling Samsung Life Insurance's 4.9 trillion won offer in 2010.

More than 3,600 athletes are expected to compete in over 100 events at the Winter Olympics and Paralympics in Beijing and the mountain city of Zhangjiakou. This will mark the first time a city has hosted both Winter and Summer Games, with Beijing the site of the summer event in 2008. The omicron outbreak and calls for a boycott over China's human rights record have clouded the atmosphere around the event.

Yoon Seok-youl, presidential candidate for South Korea's opposition People Power Party, is neck-and-neck in the race with Lee Jae-myung of the governing Democratic Party. Yoon, a former chief prosecutor, vows to lead the country by law and principle rather than populist ideas. Lee, former governor of Gyeonggi province, believes that the country needs more radical change and has promised to introduce a universal basic income program to help the marginalized and boost the national economy.

After a turbulent five years under Carrie Lam, an election committee dominated by pro-Beijing elites will designate who will serve as Hong Kong government chief executive from July. Lam has yet to indicate if she will seek a second term, but legal changes to the formation of the committee mean the city's political opposition will have little say in the matter.

Japan's main stock market will be restructured into three segments, with a top-tier Prime market made up of companies who are expected to meet higher disclosure standards in areas such as climate change risk. Officials hope the reshuffle can raise the bourse's global standing and attract more foreign investors.

Delegates are to meet in person for sessions of the UN Biodiversity Conference COP15 in Kunming, China. The body is expected to adopt a new global framework setting long-term goals for environmental preservation, including conservation of at least 30% of the world's land and sea area and an increase of $200 billion in funding.

Vietnam, which has barred entry to most foreigners for nearly two years due to the COVID pandemic, will host the Southeast Asian Games, which have been postponed from 2021. Some 10,000 competitors will compete in 40 sports including soccer, boat racing and the local martial art Vovinam.

More than 18,000 posts will be up for grabs as Filipinos vote in a general election to fill roles from city council representative to president. Presidential hopefuls include front-runner Ferdinand Marcos Jr., son of the late dictator, incumbent Vice President Leni Robredo, Manila Mayor Isko Moreno and boxing star Manny Pacquiao.

Australians are due to vote on a new parliament by May, with Prime Minister Scott Morrison in a familiar underdog position as he was in 2019. His administration's handling of the omicron outbreak is likely to make or break his chances of pulling out a second surprise victory.

Following Prime Minister Fumio Kishida's victory in lower house elections in October, voters will have a chance to pass judgment on his first year in office as the three-year term of the upper house comes to an end. A clear victory would give Kishida a stronger hand to shrug off the influence of party elders such as predecessor Shinzo Abe.

The Association of Southeast Asian Nations will mark the anniversary of its founding in 1967, with the 10-member bloc at a potential turning point as members wrestle with continuing turmoil in Myanmar following the military ouster of Aung San Suu Kyi's elected government and the impact of rising U.S.-China tensions.

The eastern Chinese city of Hangzhou, home base to tech group Alibaba Group Holding, will host some 10,000 athletes competing on behalf of 45 countries and regions at the 19th Asian Games. Esports, including "Dota 2" and "League of Legends," as well as break dancing, will be featured for the first time among the 40 sports represented.

Uzbekistan will bring together leaders of the Shanghai Cooperation Organization, a China-headquartered bloc, for their annual summit to discuss Afghanistan and other security issues, with Iran making its debut as a full member.

Xi Jinping gets another term?

Chinese President Xi Jinping is expected to win a new term as Communist Party general secretary at a congress that is held by the organization every five years. It will also set directions for policy on the economy and other areas.

Indonesia will host the Group of 20 Leaders' Summit on the resort island of Bali under the theme "Recover Together, Recover Stronger." Jakarta has named global health architecture, digital transformation and the sustainable energy transition as priority matters for its presidency of the group.

Taiwanese voters will choose mayors, city councilors and village chiefs in the first nationwide election since President Tsai Ing-wen won a second term in January 2020 in an election likely to set the tone for choosing her successor in 2024. Her two predecessors each won the presidency after first serving as mayor of Taipei.

The World Cup kicks off in Qatar, the first time the global soccer competition will be held in the Arab world. Thirty-two national teams will vie for the sport's biggest prize, with four or five countries from the Asia region joining the tournament.

Delegates from around the world will gather for the UN Climate Change Conference COP27 in Sharm el-Sheikh, Egypt, with China and India among those under pressure to enhance their commitments to carbon emission reductions.

Leaders of Asia-Pacific Economic Cooperation member countries are expected to gather in Thailand under the theme "Open. Connect. Balance" after meeting only virtually in 2021.

India is due to assume the G-20 presidency for the first time, taking over from Indonesia. Piyush Goyal, cabinet minister with portfolios including commerce and industry, consumer affairs, food and public distribution, and textiles, recently took on the additional responsibility of overseeing New Delhi's participation in this forum for international economic cooperation.