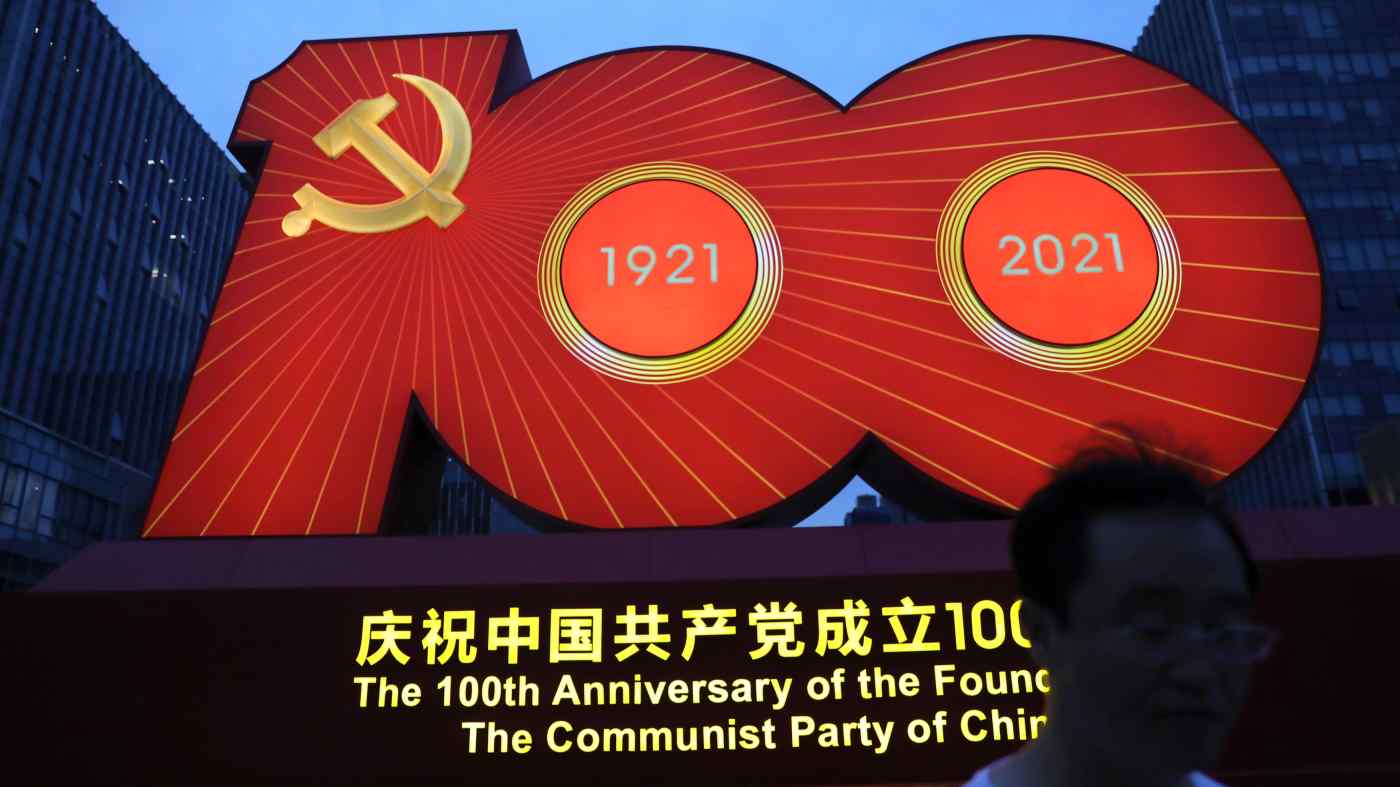 The Chinese Communist Party sees the centenary of its founding as an important event that will highlight the legacy of socialist rule and the regime's success in controlling COVID-19.   © Reuters
June 27, 2021 18:30 JST | China
CopyCopied

This will be a week of Chinese milestones. Weeks of lead-up events have set the stage for the Chinese Communist Party to mark the 100th anniversary of its founding in 1921 in Shanghai on Thursday. For President Xi Jinping, this will be a key occasion to highlight the regime's achievements.

The same day, China will also mark the return of Hong Kong to its rule in 1997. The day before, the city will complete its first year under a contentious national security law imposed by Beijing. Also by Wednesday, China will launch a national trading platform for carbon emissions credits via the new Shanghai Environment and Energy Exchange, according to state media.

Elsewhere in the region, Taiwan will kick off its annual shareholder meeting season amid special COVID rules, while Thailand will open the island of Phuket to vaccinated foreign tourists with no quarantine requirement. Vietnam and Japan will release economic indicators showing how much activity has been affected by the surge of virus cases in both countries.

Tune in Tuesday for Asia's Technology Forum, a joint Nikkei Asia-FT online event, and keep up with our reporting all week by following us on Twitter @NikkeiAsia.

Companies are hurrying to complete initial public offerings by June 30 to avoid the need to update financial results in their sale documents. Morimatsu International, a unit of Japanese pressure equipment manufacturer Morimatsu Industry, and Yuexiu Services Group, the property management arm of a Chinese real estate developer, will debut on the Hong Kong Stock Exchange on Monday.

More than 600 Japanese companies will hold annual shareholder meetings on Tuesday, including Takeda Pharmaceutical, Nintendo and Sharp. Although Japan lifted its COVID-19 state of emergency last week in big cities like Tokyo and Osaka, many companies are calling on shareholders to join the sessions online to limit the spread of the virus.

Newly installed Foreign Minister Yair Lapid is set to be the first Israeli cabinet member to pay an official visit to the United Arab Emirates, dedicating the new embassy his country opened in January in Abu Dhabi as well as a consulate in Dubai.

The Southeast Asian nation is set to publish second-quarter gross domestic product numbers. While Vietnam is still expected to post one of the highest growth rates in the region, analysts have pared back expectations as the country's worst COVID wave has forced the lockdown of industrial parks and big cities, and vaccination efforts are proceeding slowly. Goldman Sachs, for example, has pared its forecast for the quarter's growth from a year before to 6.9% from 7.2%.

Lawyers for Huawei Chief Financial Officer Meng Wanzhou will seek to persuade a Vancouver judge to allow them to bring into evidence documents obtained through a legal settlement with HSBC Holdings, which used to serve the Chinese telecommunications equipment company.

The lawyers on Friday lost a bid to keep the documents confidential, but still hope to use them to defeat U.S. efforts to have Meng extradited to face bank fraud charges. Meng has under detention at her home in Vancouver since her arrest on a U.S. warrant in December 2018.

Chinese ride hailing operator Didi Chuxing will debut on the New York Stock Exchange after scaling back its IPO target to around $4 billion due to a lack of investor support for the $100 billion valuation it originally sought. At the new top end of the indicative share price range, the company would be valued at $67 billion.

Online grocer Dingdong Maicai, meanwhile, will start trading on the same exchange a day earlier, after raising up to $357 million. The two launches follow the poor debut Friday of rival online grocer Missfresh, which lost a quarter of its market value despite pricing its shares at the bottom of their marketed range.

The deadline closes for hopefuls seeking licenses to open a digital bank in Malaysia to submit applications to the country's central bank. Up to five bidders are expected to be chosen by year's end. Telecommunications operator Axiata and local conglomerate Sunway are among those to have indicated plans to enter the race.

Hong Kong marks one year since the imposition of a national security law over the city by Beijing. The law, which circumvented the local legislature, has helped effectively muzzle dissent in the former British colony and reshape its political system, schools, media and civil society while driving some activists and politicians into exile.

More than 100 people have been arrested under the security law, with the first of them, Tong Ying-kit, now on trial on charges of involvement in terrorism and secession and facing a possible life sentence if convicted.

100th anniversary of the CCP

Ahead of the celebration, President Xi Jinping will award "July 1 Medal" to outstanding party members and deliver a speech in Beijing on Tuesday. For the capital's anniversary observance itself, local media earlier reported on a rehearsal involving 14,000 people and numerous military helicopters and advanced warplanes, including the J-20 stealth jet.

Across the country, cinemas will start showings of "1921," a new historical epic, financed in part by Tencent Holdings' movie unit. Its casting, particularly of young singers and stars, earlier came under criticism as implying a lack of adequate respect for revered revolutionary heroes.

Thailand will open the way for vaccinated international tourists to come to the island of Phuket without quarantine. The "sandbox" program is the initial step in the kingdom's ambitious reopening plan, which aims to let incoming visitors roam around Thailand freely by mid-October.

Success in Phuket will help officials build confidence in their ability to balance public health and tourism, but some worry about the risks of further COVID outbreaks. Tourism and related businesses accounted for 20% of Thailand's gross domestic product in pre-COVID times.

The island's annual corporate shareholder meeting season kicks off under special COVID rules after a surge of virus cases forced officials to postpone the events from late May.

Under new regulations, companies including Foxconn display affiliate Innolux and printed circuit board maker Zhen Ding Tech Group will convene meetings with up to five attendees indoors or 10 outdoors, with other shareholders and directors joining online after Taiwan extended social distancing controls through mid-July.

The venture, tentatively named LG Magna e-Powertrain, will target the fast-growing auto electrification market, including possibly cars from American device maker Apple, with production in the U.S., China and other countries.

Business sentiment is expected to register gains in the Bank of Japan's quarterly Tankan survey, with economists forecasting a rise in the headline index to levels not seen since 2018. Japan's export-oriented manufacturing sector is set to lead the recovery on the back of strong demand from China for capital goods and from the U.S. for cars. There are headwinds, such as rising commodity prices, but the economy is expected to overcome these and continue growing as COVID vaccinations progress and the domestic economy reopens.

The 9th Pacific Islands Leaders Meeting will be held online, with Japanese officials joining with leaders of the 18 members of the Pacific Islands Forum, even as five of the group's members are seeking to break away after a disagreement over elections. The summit has been held every three years since 1997 to strengthen ties between Japan and the Pacific nations, with the leaders expected to discuss economic cooperation, disaster response, the environment and other issues.

Tokyo goes to the polls

With the Japanese capital braced to welcome the Summer Olympics later in the month despite an ongoing COVID outbreak, voters will go to the polls to choose members of the Tokyo Metropolitan Assembly. The focus will be on whether Gov. Yuriko Koike's Tokyo First Party can retain power after its surprise victory in its election debut four years ago.

Koike was hospitalized for exhaustion last week, which may bode ill for her group's chances of stopping the Liberal Democratic Party, the national ruling party, from resuming its dominant position in the assembly ahead of general elections expected later this year.