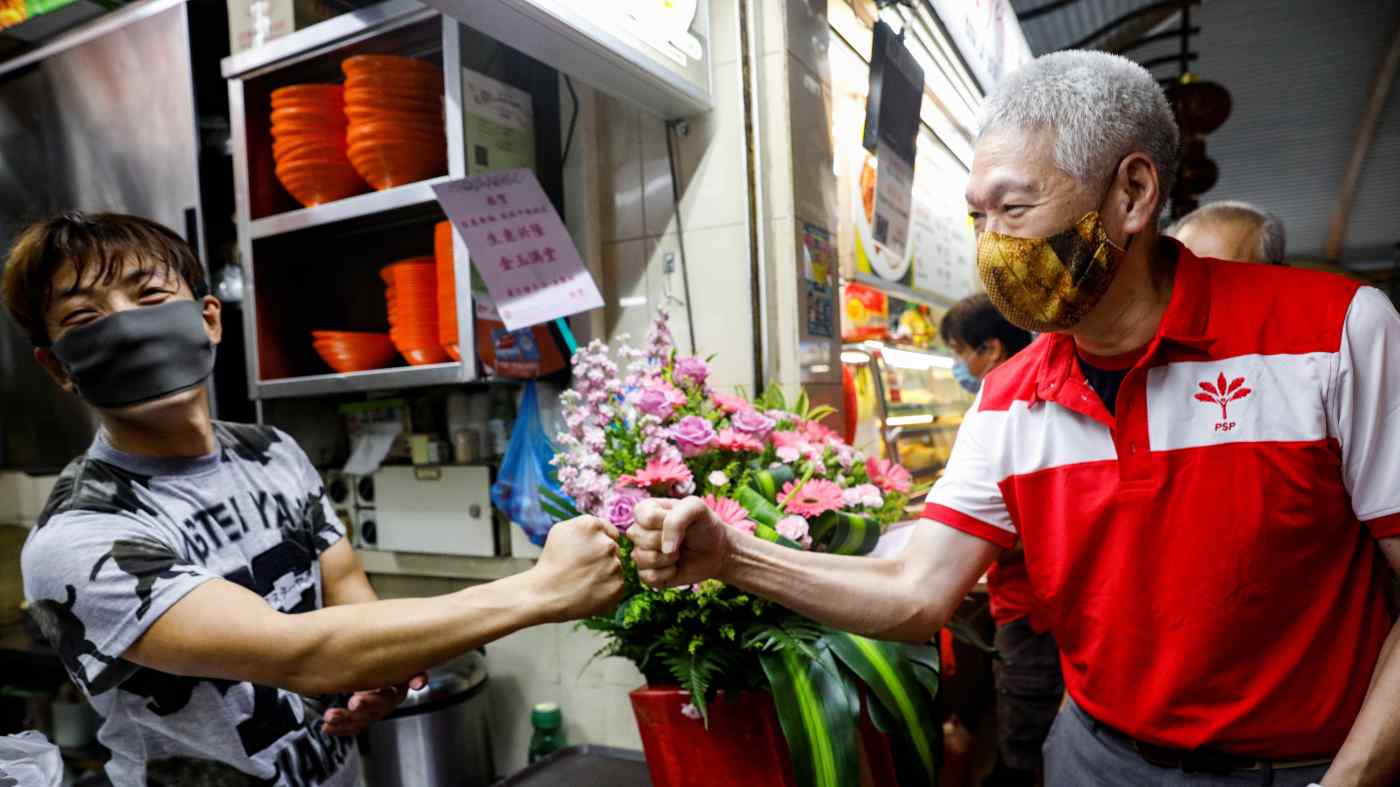 Lee Hsien Yang, the estranged younger brother of Prime Minister Lee Hsien Loong, on Sunday greets a voter during a walkabout ahead of the general election in Singapore.   © Reuters
June 28, 2020 18:00 JST | Japan
CopyCopied

A semblance of normalcy is settling over Asia, spurred by Singapore's decision to move forward with this year's general election after recovering from coronavirus restrictions. The Singapore campaign season starts this week. Tokyo's turn at the polls on Sunday will largely be a referendum on Governor Yuriko Koike's handling of the outbreak.

Economic indicators this week will come from Vietnam, where the government will release second-quarter GDP data on Monday, followed by the Bank of Japan on Wednesday with its closely watched business sentiment survey, known as Tankan.

After posting a net profit drop of 75% in the last fiscal year and a 58 billion-yen ($540-million) loss in the January-March quarter, ANA Holdings will have its annual general meeting on Monday. While the airline is seeing signs of recovery for domestic flights, investors will be listening for the company's strategy to weather the coronavirus storm.

On the same day, Nissan Motor will also try to satisfy shareholders with its midterm plan, which focuses on cutting production capacity as well as a number of car models. The battered automaker posted a net loss of 671 billion yen ($6.2 billion) for the year ended in March, as a result of former chairman Carlos Ghosn's failed expansion strategy and back-to-back corporate scandals.

The standing committee of the National People's Congress will wrap up an unusual second meeting in two weeks. It is widely expected that the committee will complete the review and passage of a controversial national security law for Hong Kong that would then come into immediate effect. The text of the law has been a closely guarded secret, but officials have signaled that details about the scope of offenses covered and related penalties will be made public after passage.

The election comes as the city-state faces multiple external and internal challenges, from the coronavirus pandemic and the U.S.-China trade wars to an aging society. The Singapore parliament is unicameral, and 93 seats will be contested in this election.

The annual July 1 protest march to mark the anniversary of Hong Kong's handover to China will be banned for the first time this year. Authorities cited public health concerns to halt the march, though local coronavirus transmissions have largely been stamped out in the past three months. Some citizens are expected to defy the ban and take to the streets.

On the same day, Taiwan will open a new office dedicated to offering humanitarian assistance to Hongkongers seeking refuge from Beijing's tightening grip.

What's new? The new guidelines will make it mandatory for boards of directors to disclose oversight of ESG issues, management approach and strategy, and how it reviews progress on ESG issues. Companies will now be required to disclose how climate change will impact their businesses, as well as targets and steps to cut emissions, energy use and waste.

In the latest development in Beijing's war against smog, China will roll out new auto emission standards, the most stringent in the world, on July 1. Known as Stage-6, the new standards will allow auto dealers to sell gasoline and diesel cars only if they emit major pollutants such as carbon dioxide and nitrogen oxide at 50% lower than the current level.

Visitors will have to go without hugs from Mickey Mouse when Tokyo Disney Resort resumes operations this week, following the reopening of parks in Shanghai and Hong Kong. Only around 15,000 visitors will be able to apply for pre-booked tickets each day, a fraction of the park's typical daily attendance of 100,000. Upon arrival, visitors will have their temperatures taken and be required to wear medical masks throughout their stay.

Thailand's largest medical glove maker will debut on the Stock Exchange of Thailand on Thursday, after raising $482m in an initial public offering last week. A rare winner from the coronavirus pandemic, Sri Tang plans to boost annual production to 50 billion gloves by 2025, a challenge to Malaysia's Top Glove Corp.

Purge at Luckin Coffee's board

Reeling from the disclosure of a $310 million accounting fraud in April, Luckin Coffee shareholders will meet on Sunday to purge half of its eight-member board, including embattled chairman Charles Lu Zhengyao. The company, which has received two delisting notices from Nasdaq, will also vote on the appointment of two independent directors.

Changes to the board could effectively stall the work of a special committee that has been investigating the fraud, Caixin reported, citing a person close to the committee. Lu could also face criminal charges in China after authorities are said to have discovered emails in which he instructed colleagues to commit fraud.

Sotheby's on Sunday will be the first of the major auction houses -- including Christie's, Bonhams and Phillips -- to kick off large live public sales in Hong Kong for the first time in months, after canceling their usual spring events in the Asian art hub due to the coronavirus. Global travel restrictions mean that most buyers at the auctions, which run through July 13, will be Hong Kong residents, but collectors living elsewhere will be able to participate in the sales through streaming and other digital platforms.

Olympics on the line as Tokyo elects new leader

Ahead of the Tokyo gubernatorial election on Sunday, Yuriko Koike, the 67-year-old incumbent, is leading the pack. Seeking a second four-year term, Koike is making the coronavirus response her top policy priority, which she says will clear the path for the postponed Olympic Games to go ahead next summer. Other candidates are calling for postponement or outright cancellation of the event and promise more financial relief for people affected by the outbreak and the ongoing recession.