From Taiwan's vote to the Tokyo Olympics: Asia's 2020 calendar

Here are the big political, business and other events we'll be watching 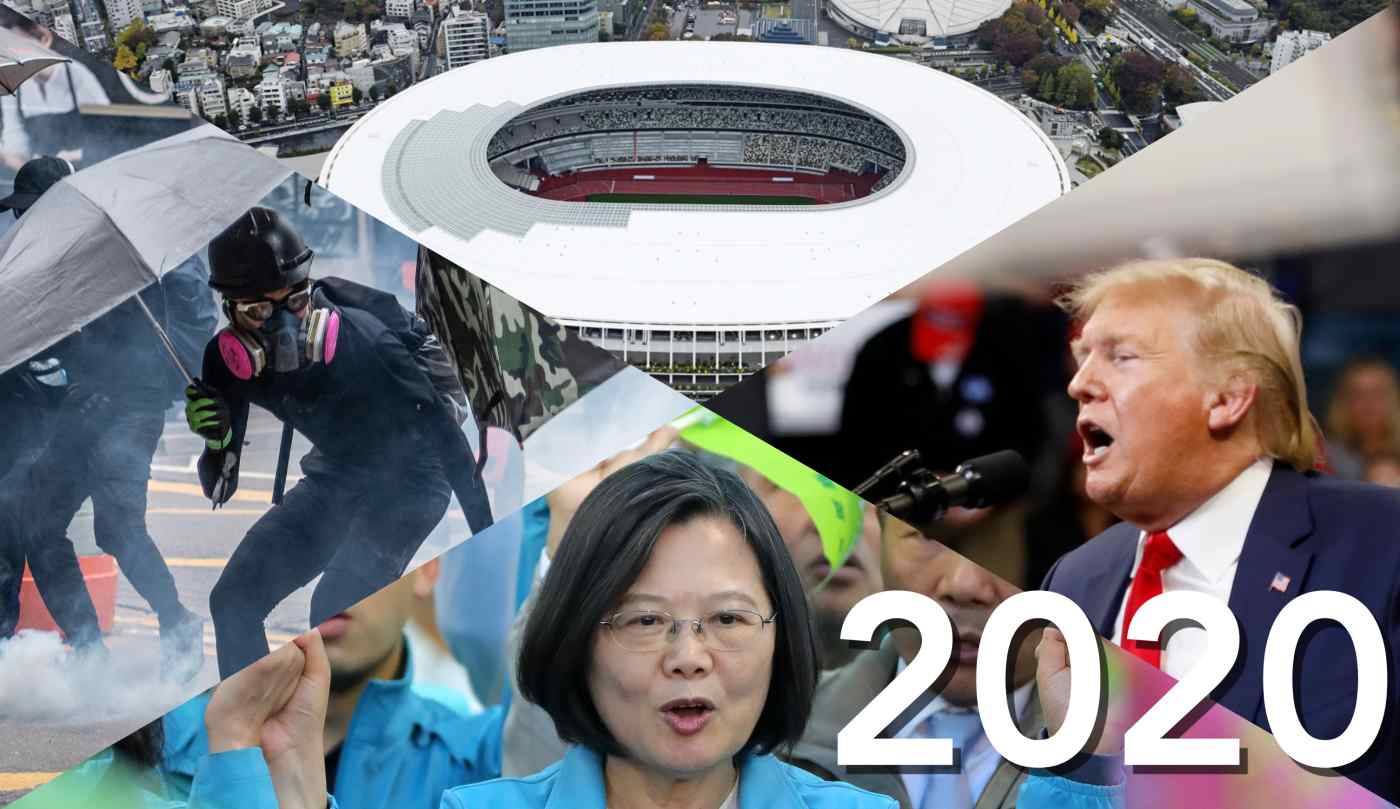 Welcome to Nikkei Asian Preview. The end of the year is approaching and a slew of big events are already on the calendar for 2020. Here's what we'll be watching around Asia in the year ahead.

Voters in Taiwan go to the polls for presidential and legislative elections on Jan. 11. One way or another, their decision will shape cross-strait relations with Beijing for the next four years. The China-skeptic incumbent Tsai Ing-wen is likely to be reelected, after widening her lead over the Beijing-friendly Kuomintang candidate Han Kuo-yu in the past few months.

Japan is set to dispatch Self-Defense Force assets to Middle Eastern waters, under tight restrictions but with an eye toward ensuring safe navigation for commercial shipping. The U.S. called for assistance after two tankers, including a Japanese-owned ship, were attacked in June near the Strait of Hormuz. For the time being, however, the SDF will be limited to "survey and research" operations in international waters outside the Persian Gulf, in the hope of maintaining friendly ties with Iran.

Prime Minister Shinzo Abe will also visit the Middle East, including Saudi Arabia and the United Arab Emirates, to seek their support for the dispatch of the SDF personnel.

Thailand's telecom regulator is expected to hold a 5G spectrum auction in February, with the winning bids to be announced in March. The government wants to have commercial 5G services up and running by midyear, to stay competitive with neighbors like Singapore and Vietnam, which also plan to launch the superfast networks in 2020.

The once-a-year meeting of China's top two political bodies will chart a course for a slowing economy. Beijing is expected to set an economic growth target of "around 6%" for 2020, down from this year's goal of "6% to 6.5%." The National People's Congress, China's legislature, will convene on March 5, according to Xinhua.

A critical election for Moon Jae-in

South Korea will hold legislative elections on April 15. The governing Democratic Party is eager to maintain or strengthen its control of the National Assembly, as President Moon Jae-in enters the lame duck period of his five-year term.

President Xi Jinping is expected to make his first state visit to Japan in April, as he looks to highlight improved relations with Tokyo amid tensions with Washington. One focus will be whether Xi and Prime Minister Shinzo Abe sign a "fifth political document" pronouncing their intent to cooperate on global issues including the economy and the environment.

As the chair of the Association of Southeast Asian Nations in 2020, Vietnam will hold leaders summits in April and November, with dignitaries coming together to discuss economic cooperation. The leadership of the bloc basically rotates in alphabetical order: Thailand took over in 2019, after Singapore's turn the previous year.

For the first time since the U.S. Congress passed the Hong Kong Human Rights and Democracy Act in November, the Donald Trump administration must report the names of people "knowingly responsible" for gross human rights violations in the city, and those who have repeatedly undermined the city's autonomy or rule of law. Named individuals could have their assets in the U.S. frozen and visas denied -- potentially sparking retaliation by Beijing.

Trump will welcome the leaders of Canada, France, Germany, Italy, the U.K. and the European Union at the official presidential retreat in Maryland. The venue for the Group of Seven summit was changed after plans to host it at Trump's private Mar-a-Lago golf club in Florida were widely panned.

More than 1 million people marched through downtown Hong Kong on June 9, 2019, to say "no" to a controversial bill that would have allowed extraditions to mainland China. The bill was later withdrawn but the protests have continued, with citizens insisting on a set of five demands including direct elections for the city's chief executive.

Tokyo will host the Olympics from July 24 to Aug. 9. This will be the Japanese capital's second time staging one of the world's biggest sporting event, after the 1964 Summer Games. Read our coverage on how the city is preparing for the influx of fans -- particularly the hospitality and transportation sectors.

China is expected to launch its maiden mission to Mars, with the ultimate aim of landing an unmanned vehicle on the red planet by July 2021. The program is a step toward bigger ambitions of collecting samples in 2030 and sending humans to Mars before 2050, according to state news agency Xinhua. The country's rapid advances in science and technology are widely seen as a challenge to U.S. supremacy.

Following the Olympics, the Paralympics will kick off in Tokyo on Aug. 25 and run until Sept. 6. While the Olympic marathon and race walking events were moved to the northern island of Hokkaido due to concerns about excessive heat, the Paralympic events will be held in the capital.

A Jokowi dynasty in the making?

Regional elections will be held in nine Indonesian provinces, 224 districts and 37 cities. While the candidates have not been finalized, President Joko "Jokowi" Widodo's eldest son Gibran Rakabuming Raka has thrown his hat into the ring for mayor of Solo, the president's birthplace. Widodo's son-in-law, Bobby Nasution, is also running for mayor of Medan, Sumatra's largest city. Their political ambitions have sparked speculation -- and criticism -- over the possibility of a new dynasty.

The operators of Yahoo sites in Japan and the Line chat app plan to integrate their businesses by October. In a fight to survive in an internet sector dominated by the likes of Google, Amazon and Alibaba, the Japanese-Korean joint venture will have a combined user base totaling 100 million. It will also become the top mobile payments player in Japan.

Myanmar is due to hold a general election, most likely in November. The National League for Democracy, led by state counselor Aung San Suu Kyi, achieved a landslide victory last time around in 2015. The NLD is almost certain to retain the leadership, but whether it can maintain a single-party majority is a different question. After the election, the new members of parliament will vote to choose the next president, who will take office in March 2021 for a five-year term.

ASEAN chair Vietnam will host the East Asia Summit, where leaders from across East and Southeast Asia, India, Russia and the U.S. will gather to discuss trade and security. U.S. President Donald Trump, however, may not attend. He skipped the summit in 2018 and 2019.

As the first Arab nation to take over the Group of 20 presidency, Saudi Arabia will host world leaders in Riyadh. Critics of the kingdom and its de facto ruler, Crown Prince Mohammed bin Salman, have called on the G-20 to stand up for Saudi dissidents and demand accountability for the killing of journalist Jamal Khashoggi.

The leaders of 21 Asia-Pacific economies will convene in Malaysia, after a string of high-level meetings in the country throughout the year. The Asia-Pacific Economic Cooperation forum participants will set long-term goals regarding free and open trade and investment, as the current Bogor Goals, decided in Indonesia in 1994, will expire at the end of the year.

Indonesia intends to move its capital city to the province of East Kalimantan on the island of Borneo in 2024. The government has shared a vision for the city, to be built on restored oil palm plantations surrounded by wetlands and lush tropical forests. The master plans are to be decided sometime in 2020.

Singapore is expected to hold a general election in 2020, with opposition parties looking to challenge the long-ruling People's Action Party led by Prime Minister Lee Hsien Loong. Lee, who took office in 2004, has said he intends to pass the baton to the next generation after the upcoming vote. Deputy Prime Minister and Finance Minister Heng Swee Keat is said to be the front-runner for the premiership.