Your weekly roundup of Asia's biggest business and political news 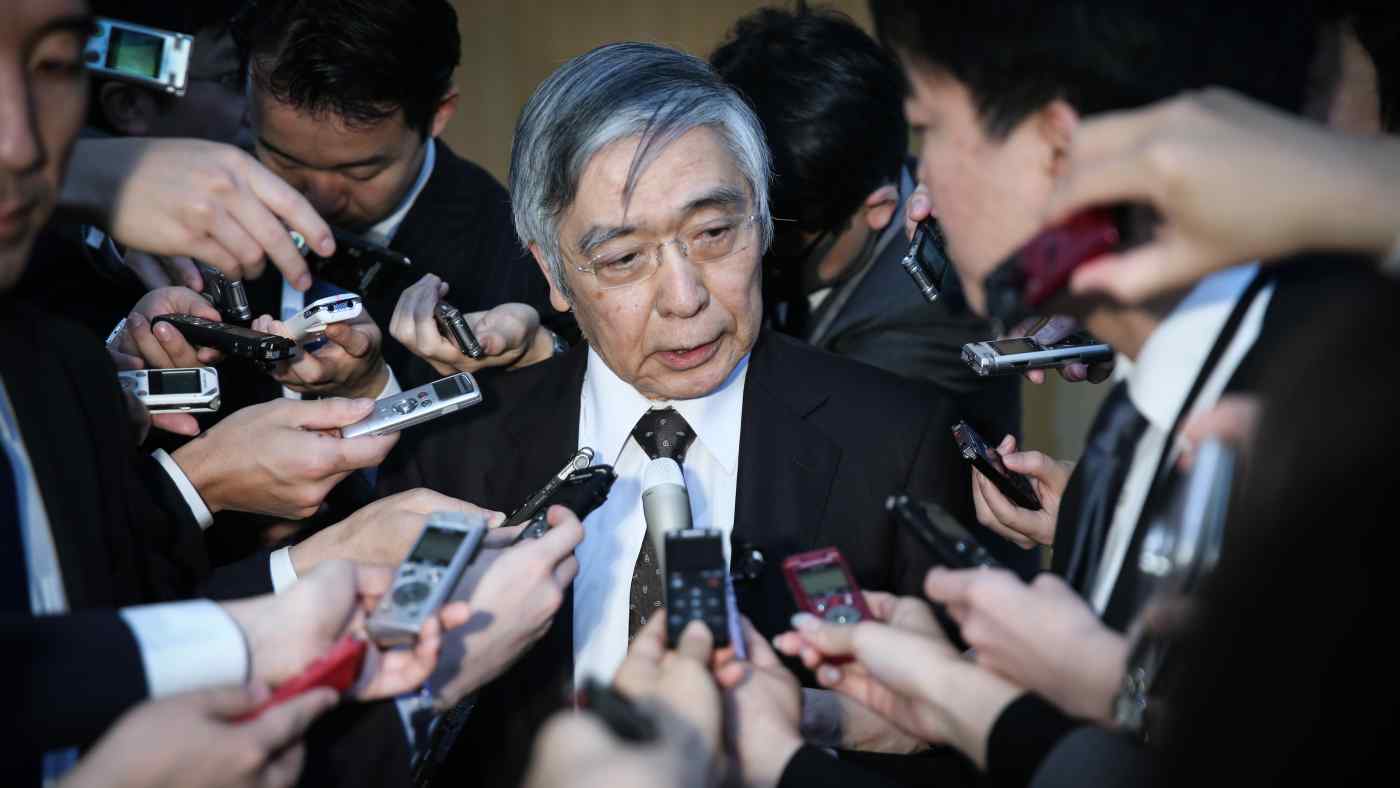 Although Wall Street managed a rally on Friday, the big story remains the markets -- and how governments around the world plan to respond following last week's turmoil. After the U.S. Federal Reserve cut interest rates to near-zero and said it would begin a government debt-buying program, the Bank of Japan moved its policy meeting up to Monday afternoon, rather than Thursday as scheduled.

Three other Asian central banks will meet on Thursday under intense pressure to ease rates. Meanwhile, there are growing concerns that monetary policymakers are running short of crisis-fighting ammunition. Follow our virus and markets blog to monitor the Asian markets on Monday.

Sporting events that were slated to start this week have been canceled due to the coronavirus. For the first time since the 2011 earthquake, Japanese professional baseball has decided to postpone the season opener, which had been set for Friday. The high school baseball tournament known as Spring Koshien, which was supposed to start on Thursday, has been canceled.

Several Olympic qualifier events have also been scrapped around the world, highlighting the question of whether the Tokyo Olympics should open as scheduled on July 24.

The Bank of Japan is expected to expand monetary stimulus for the first time in nearly four years, joining central banks in the U.S., U.K. and Australia to help industries struck by the coronavirus or increase share purchases to support the stock market.

The leaders of Canada, France, Germany, Italy, Japan, the United Kingdom and the United States will convene an emergency video conference on Monday to discuss the coronavirus. "We will coordinate research efforts on a vaccine and treatments, and work on an economic and financial response," French President Emmanuel Macron announced on Twitter.

A two-day meeting for foreign ministers scheduled for next week in the U.S. city of Pittsburgh will instead be held via video conference "out of an abundance of caution," said the U.S. Department of State.

The week opens with economic data from China, including retail sales, industrial production and fixed asset investment for January and February.

What to expect: If earlier releases such as the Purchasing Managers' Index are anything to go by, February will see a steep drop due to the coronavirus interrupting manufacturing activity.

Listening for guidance from SJM and HK Disneyland

While the negative impact of the coronavirus outbreak will not be reflected in last fiscal year's numbers, investors can still expect some updates from management on the current situation. The Asakusa district of Tokyo, a popular spot for Chinese tourists, has seen few visitors since the coronavirus outbreak began.

The deadline to submit expressions of interest for acquiring the state-run carrier Air India was supposed to be this Tuesday but has been extended to April 30, according to the Department of Investment and Public Asset Management.

Background: The Indian government put 100% of the airline up for auction in January, after a 76% stake received zero bids.

Unemployment in Hong Kong is on track to reach a three-year high as the novel coronavirus and social unrest batter the economy. Retail, hospitality and tourism are among the hardest-hit industries, where many companies have told staff to take unpaid leave. By the end of January, 4.6% of Hong Kong citizens were either unemployed or underemployed.

International arrivals are expected to have fallen sharply in February due to the coronavirus outbreak.

How bad will it be? South Korea and China are the two largest sources of visitors to Japan, but the virus coincided with Chinese New Year, one of the biggest traveling periods for Chinese. Arrivals from South Korea had already taken a hit over the past six months due to bilateral tensions.

Samsung Electronics will host a general shareholders meeting in a convention center in Suwon, south of Seoul, rather than at its office in the capital. The company changed venues to minimize the risk of coronavirus transmission. For the first time, shareholders will be allowed to vote online from home.

Hong Kong-listed Tencent Holdings will report October-December earnings after the market close on Wednesday. The Chinese social media and gaming giant had revenue of 97.2 billion yuan ($13.8 billion) in the third quarter of 2019, slightly below Wall Street estimates.

Investors will want to know if Tencent in the fourth quarter managed to fend off increasing competition from ByteDance in ad sales. The coronavirus outbreak has clouded Tencent's online marketing segment but boosted gaming sales. 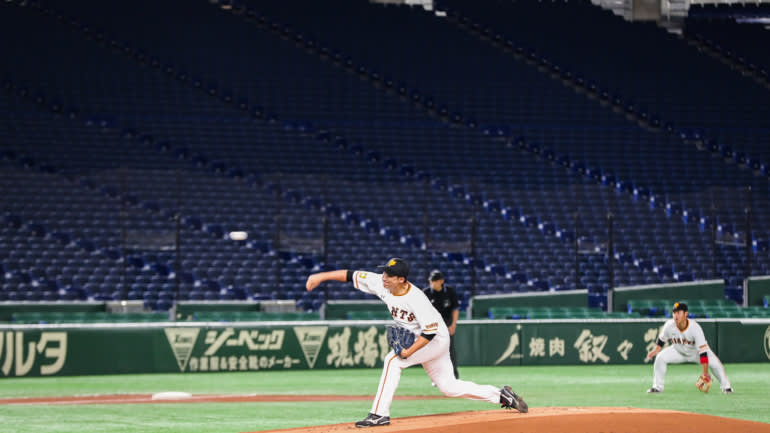 The Yomiuri Giants baseball team played to an empty Tokyo Dome on February 29. The Japanese professional league's season opener on Friday has been postponed. (Photo by Rie Ishii)   © Rie Ishii

Thursday will bring monetary policy meetings in Taiwan, Indonesia and the Philippines. The Central Bank of Taiwan has said that the coronavirus is likely to hinder private consumption on the island, and that downside risks to inflation remain possible if the virus continues to spread.

Bank Indonesia slashed the key interest rate at its February meeting as the economy started to suffer from the coronavirus outbreak, but it may decide against another cut for March. Since the emergency rate cut by the U.S. Federal Reserve two weeks ago, the Indonesian rupiah has weakened by over 1.5% against the dollar and is at a 10-month low against the greenback.

Why it matters: Indonesia's high levels of foreign currency debt make the economy vulnerable to big falls in the currency.

Lastly, Philippine monetary policymakers will meet on Thursday amid a rising number of local coronavirus cases, an emergency declaration by President Rodrigo Duterte and a lockdown of Metropolitan Manila, which has triggered a heavy stock market sell-off.

Bangko Sentral Gov. Benjamin Diokno, who delivered a 25 basis point cut in February, previously said the next easing will likely be in the second quarter, but some analysts believe the pandemic could prompt the bank to cut sooner.

Amid its transition from a traditional manufacturer to a mobility solution company, Hyundai Motor will host a general shareholders meeting at its Seoul headquarters on Thursday.

Chairman Chung Mong-koo will step down as a board director at the meeting, passing the baton to his son, senior vice chairman Chung Eui-sun.

Myanmar's Yangon Stock Exchange opens the door on Friday to foreign investors, allowing them to trade shares for the first time. It opened in March 2016, but only locals have been allowed to trade.

Myanmar hopes that lifting the ban will bring an influx of foreign capital and drive activity on the YSX, which has been dismal. Only five companies are listed, and the trading volume has been low. A sixth company, logistics provider Ever Flow River Group, is set to debut on the same day.