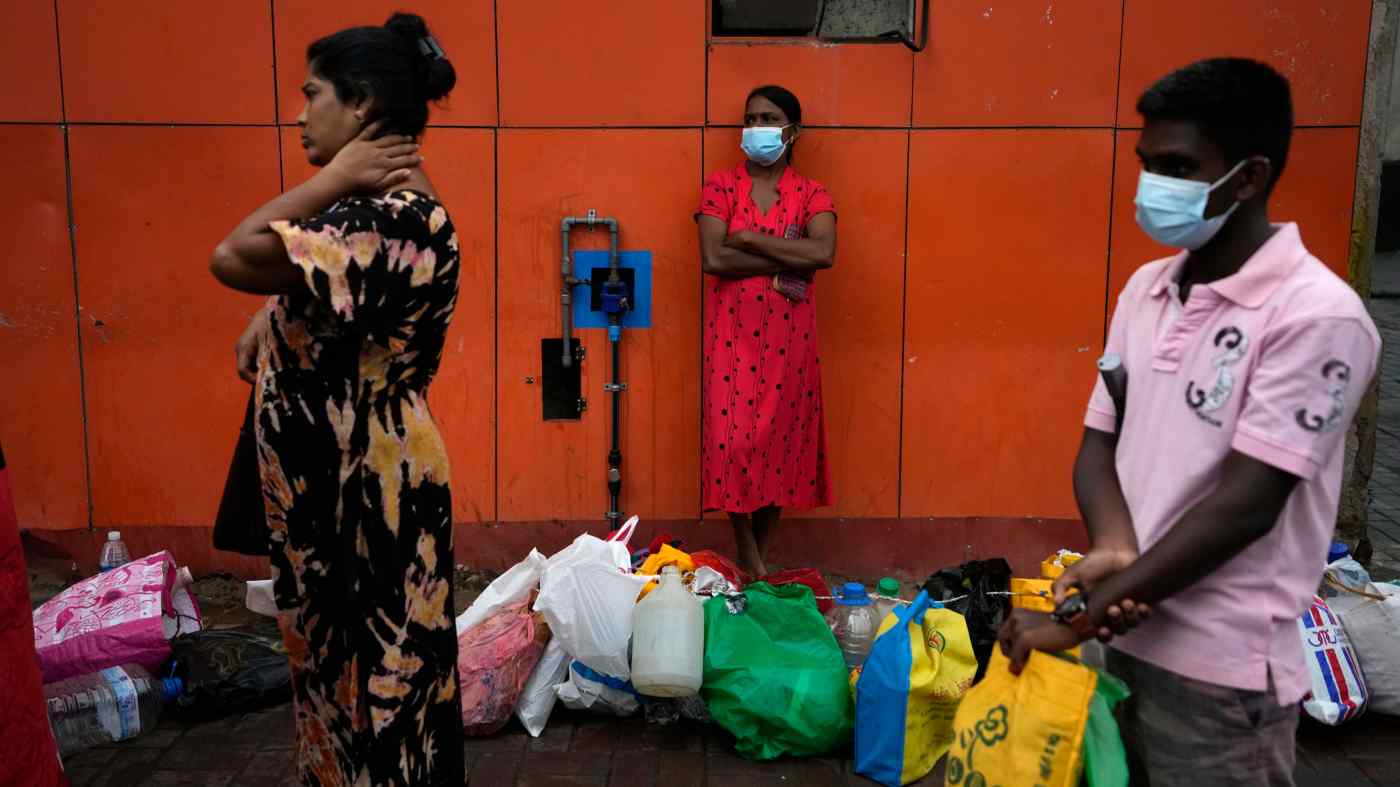 People queue at a fuel station in Colombo, Sri Lanka, hoping to buy kerosene. IMF delegates are set to visit the country this week as it battles a spiraling economic crisis.   © AP
June 19, 2022 18:00 JST | Japan
CopyCopied

China will sponsor two events this week: a peace conference with several African countries in the Ethiopian capital Addis Ababa and a BRICS leaders' summit to be hosted online by President Xi Jinping from Beijing.

On the other side of the globe, leaders of the Group of Seven wealthy democracies will meet in Germany from Sunday to continue their discussions on the Russia-Ukraine war and other pressing issues.

A team from the International Monetary Fund is due to arrive in Colombo for talks on the country's economic crisis, the worst since independence from Britain in 1948.

Sri Lanka defaulted on its foreign debt for the first time in its history last month and is in talks with the IMF for a bailout package.

China hosts the first Horn of Africa peace conference in Ethiopia's capital, Addis Ababa. Beijing has appointed a special envoy for the region -- which includes Ethiopia, Eritrea, Djibouti, Somalia, Sudan, South Sudan and Kenya -- and is keen to help reduce conflict and instability there. Beijing sees East Africa as a gateway to the rest of the continent, with the push to promote stability there marking a departure from its usual policy of noninterference.

Australian Defense Minister Richard Marles visits India for talks with his counterpart Rajnath Singh on ways to boost bilateral defense and security ties. This is the first high-level visit to New Delhi from the Australian side since Prime Minister Anthony Albanese assumed office last month and underscores that the relationship between the two nations remains strong despite the leadership change in Canberra.

Australia, India, Japan and the U.S. make up the Quadrilateral Security Dialogue, or Quad, which is working for a "free and open Indo-Pacific," a euphemism for containing Chinese influence in the strategic region.

U.S. legislation banning the import of goods from China's Xinjiang region takes effect, impacting billions of dollars worth of cargoes and sparking confusion and uncertainty for many companies. The Uyghur Forced Labor Prevention Act, signed by President Joe Biden in December, will presume all products from the region were made with forced labor.

China's National People's Congress Standing Committee convenes through Friday to review several bills. Among them will be a draft amendment to an anti-monopoly law that was used in last year's clampdowns against tech companies including Alibaba Group Holding.

Chinese President Xi Jinping is set to host the annual BRICS summit online, joined by his counterparts from Brazil, India, Russia and South Africa. Foreign ministers from the group met last month, when they discussed expanding their membership, as well as the COVID-19 pandemic and global economic uncertainty due to the Ukraine war.

Taiwan's top DRAM maker Nanya Technology hosts a ceremony in New Taipei as it breaks ground on a $10 billion plant -- the biggest new Taiwanese investment in years in the memory chip sector, which has been dominated by South Korea. However, the project has been delayed by several quarters and production won't start till 2025 due to a shortage of materials, equipment and construction workers. The move also comes amid signs of a slowdown in electronics sectors ranging from TVs to smartphones.

Falling tech valuations and rising interest rates are likely to be in focus once again at the annual shareholder meeting of SoftBank Group. The Japanese technology group racked up record losses in the fiscal year that ended March, with its billionaire chairman and CEO, Masayoshi Son, betting on the upcoming IPO of Arm to revive its fortunes. Arm is a U.K. chip designer owned by the group.

Logistics platform operator GoGoX lists on the Hong Kong stock exchange, aiming to raise up to 567.3 million Hong Kong dollars ($72 million) after fees and expenses. That target is lower than previously expected, suggesting the offering has been scaled back in the face of sluggish markets.

GoGoX's co-CEO Steven Lam said the company has not been deterred by economic uncertainty and market volatility. The business, split roughly 50-50 between mainland China and the rest of Asia, is looking to expand in Southeast Asia. Founded in 2013, GoGoX connects 27.6 million shippers with 5.2 million registered drivers.

Japan releases its consumer price index for May, with the result set to be a key factor shaping monetary policy at the country's central bank. The core index rose 2.1% in April from a year earlier to mark its sharpest increase in seven years, hit by global inflation and a weakening yen.

Leaders of the Group of Seven wealthy democracies meet in Schloss Elmau, Germany, from Sunday to Tuesday. The Russian invasion of Ukraine has defined the agenda of the G-7 countries for months, along with its implications for energy and food security. Climate action is also a major focus for this year's summit host, Germany. Indonesia, India, Argentina, Senegal and South Africa have been invited to attend this year's event as partner countries.