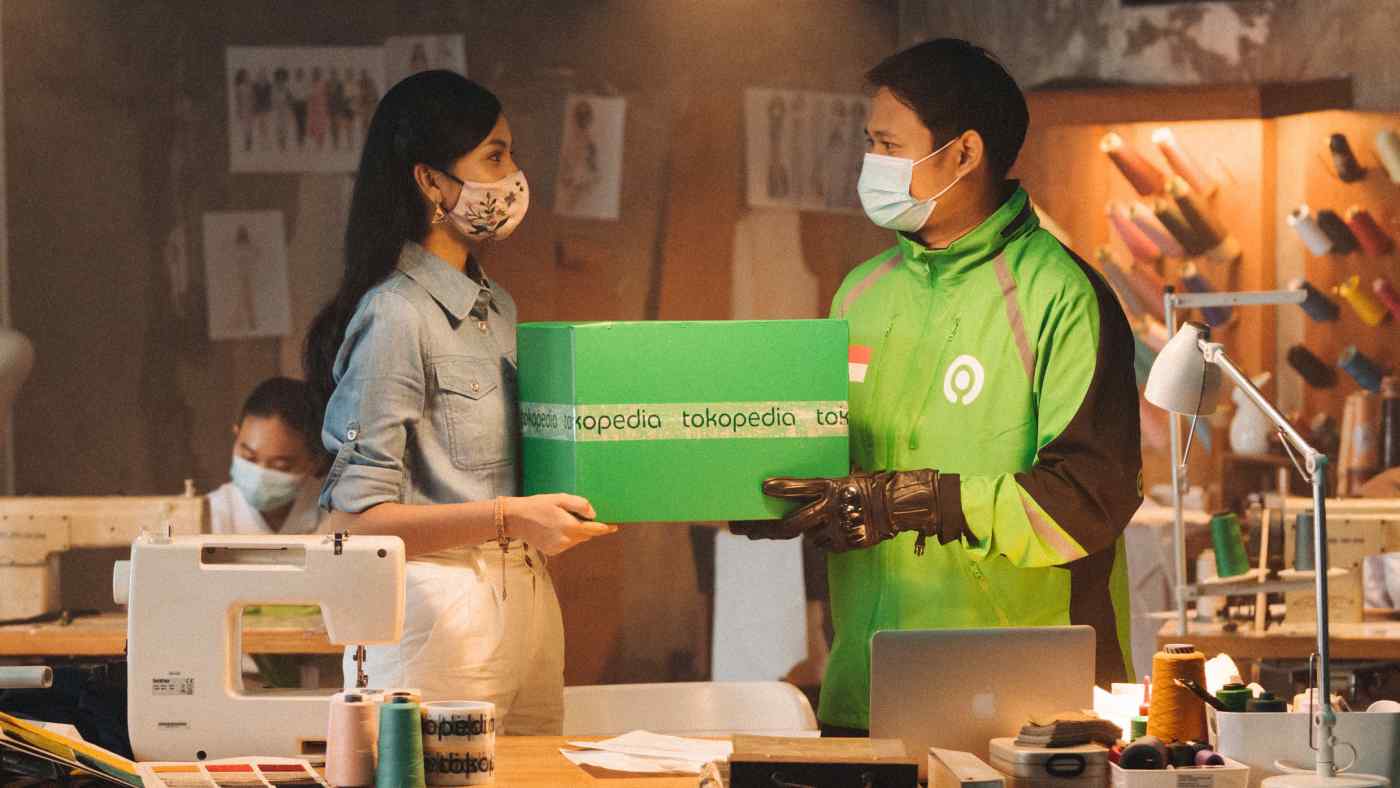 GoTo was formed last May through a merger between Gojek, a ride-hailing and payments super app, and the e-commerce giant Tokopedia. It was the biggest merger in Indonesian corporate history. (Photo courtesy of GoTo group)
April 10, 2022 18:00 JST | Japan
CopyCopied

The week will kick off with one of Asia's most closely watched initial public offerings this year: Indonesia's GoTo, whose businesses span ride-hailing, e-commerce and finance. A string of economic indicators from China will provide a snapshot of the health of the global economy. By Saturday, Hong Kong's nomination period for its next chief executive may end with just one candidate in the running.

Caixin's services purchasing managers' index for March plunged to 42.0 from 50.2 in February, dropping below the 50-point mark that distinguishes growth from contraction on a monthly basis. The rate of decline was the fastest since March 2020, the private data provider said, blaming the latest wave of omicron outbreak sweeping Chinese cities including Shanghai.

Indonesia's largest tech group, GoTo, makes its market debut on the Indonesia Stock Exchange on Monday. The IPO price is set at 338 rupiah per share, which translates to a projected market capitalization of about 400 trillion rupiah ($28 billion). The group's public listing comes amid a global market downturn stemming from the pandemic and concerns over the Ukraine war.

A U.S. federal judge is due to pass sentence on six companies convicted of fraud and conspiracy involving the evasion of $1.8 billion in customs duties and inflated sales in a case linked to China Zhongwang Holdings, one of Asia's largest aluminum products producers.

Although founder Liu Zhongtian and Zhongwang were indicted in the case, prosecutors were unable to bring them to court and both have denied having control over the six targeted companies. Zhongwang's shares have been suspended from trading in Hong Kong since August due to its failure to release financial results.

Ukrainian President Volodymyr Zelenskyy's speech to the South Korean parliament comes as Russia faces allegations that it has committed war crimes in Bucha and other Ukrainian cities are upsetting the world. Seoul is considering accepting Ukrainian refugees with Korean heritage in Poland.

New Zealand will reopen its borders at midnight to temporary workers and student visa holders, as well as Australian citizens and permanent residents arriving from anywhere in the world. All people must be vaccinated and self-test on arrival.

Myanmar will celebrate Thingyan, a 4-day-long new year festival ahead of the country's traditional New Year Day. Local governments normally set up large public stages, from which people sprinkle water on crowds and vehicles, but such events were canceled for the last two years due to the pandemic. The military regime has announced that it will resume the Thingyan events this year, but it is far from being welcomed by citizens as resistance against the regime continues in many parts of the country.

New Zealand's central bank is expected to hike its official cash rate in an attempt to stem accelerating inflation. The Bank of America sees a 50 basis point increase to 1.5%.

Singapore will release its preliminary gross domestic product data for the January-March quarter. While the outlook for the various sectors remains uneven, the city-state's economy is expected to continue to expand this year as the government's easing of COVID-related restrictions is set to improve domestic demand.

North Korea celebrates the 110th anniversary of its founder Kim Il Sung's birth. South Korea and the U.S. worry that Pyonyang may launch another intercontinental ballistic missile or test a nuclear bomb to show its military prowess amid South Korea's political transition.

The two-week nomination period for Hong Kong's next chief executive will end on Saturday, with only one candidate in the running so far. Security hardliner John Lee threw his hat into the ring last week after resigning from his post as the government's second-in-command. His bid telegraphs Beijing's intent to prioritize security over finance and economic development. Pro-establishment sources have told Nikkei Asia it's likely the May 8 election will be a one-man race to avoid an internal rift.