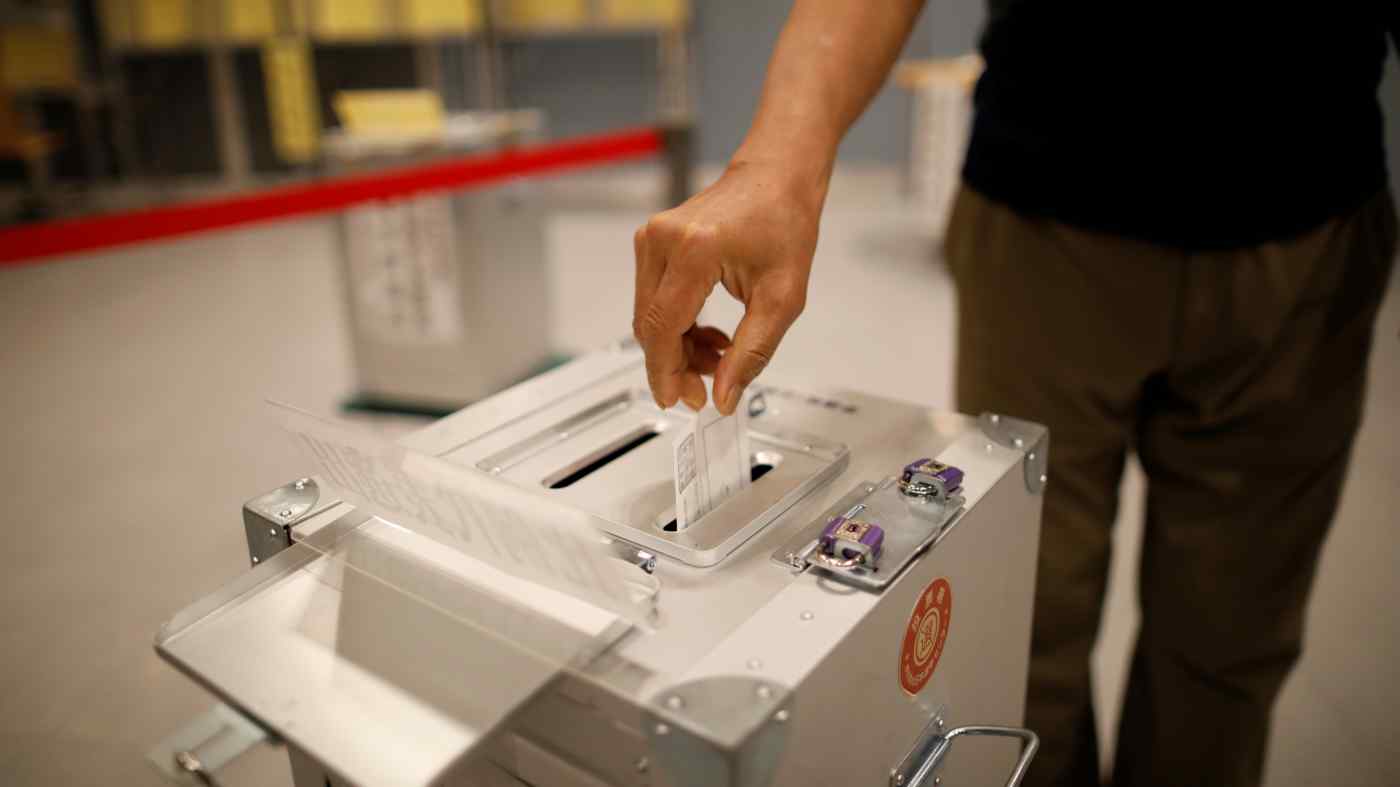 The week is filled with a slew of companies reporting their latest earnings, followed by a busy weekend which will see the opening of the 26th U.N. Climate Change Conference of the Parties (COP26). With countries expected to negotiate on and pledge emission targets for the coming decades, COP26 is seen to be "the world's best last chance to get runaway climate change under control," as the organizers put it.

Get the best out of our coverage on these events and much more by following us on Twitter @NikkeiAsia.

A Hong Kong court will deliver its decision on whether 30-year-old Ma Chun-man is guilty in the city's second national security case. He faces up to seven years in jail on one count of secession for allegedly chanting slogans and holding placards encouraging Hong Kong independence. Various court cases are focused on the legality -- or otherwise -- of the protest slogan "Liberate Hong Kong, Revolution of Our Times." Ma's case will be a litmus test for free speech in the city.

Chinese developer Modern Land China faces a $250 million bond redemption. The company last week said it had ceased seeking consent from investors to extend the maturity date of the bond and that it planned to engage an adviser to solve its liquidity issues.

ZTE, a smaller telecom gear rival to Huawei Technologies, will disclose earnings results. ZTE and Huawei are the two key 5G station builders for China. However, China's pace of installation of the next generation of wireless communication technology has slowed since the second half of 2020 and has not yet regained momentum. That's partly due to Washington's export controls on Huawei, which have sapped inventories of U.S. chips and components.

South Korea's POSCO announces its full-third quarter earnings after releasing operating profit and revenue earlier this month. The steelmaker's operating profit more than quadrupled to 3.1 trillion won ($2.6 billion) during the July-to-September period year-on-year, while its revenue soared 44.5% to 20.6 trillion won.

HSBC is set to say Q3 net profit rose 43.6% to $2.93 billion thanks to higher revenues and a reduction in loan loss provisions set aside at the peak of the coronavirus pandemic, according to an analysts' consensus compiled by the bank. Investors will focus on the bank's progress in investing in its Asian business, expansion in wealth management, cost reduction and any fallout in loan demand from the Chinese economic slowdown.

The leaders from the Association of Southeast Asian Nations will hold a virtual summit at which the political unrest in Myanmar, regional security and recovery from the pandemic will take center stage. Earlier this month, ASEAN decided not to invite Myanmar's junta chief Min Aung Hlaing to the summit, only allowing a "nonpolitical" representative instead. The bloc will hold a series of meetings through Thursday, including the East Asia Summit in which China and the U.S. participate.

The Asian Infrastructure Investment Bank's board of governors, represented by nearly 90 country-members, will convene virtually at the lender's annual gathering in Dubai. Led by China, the AIIB approved nearly $10 billion in loans last year for 45 projects, mainly to aid economic recovery from the COVID-19 pandemic. The bank's core mandate of financing green infrastructure is expected to play a central role as countries around the world focus more on environmental sustainability to soften the impact of climate change.

South Korean chipmaker SK Hynix is expected to post solid results thanks to high demand for memory chips amid the pandemic, though it is not certain how long this will last as DRAM prices are expected to tumble in the fourth quarter.

The earnings of Hyundai Motor, South Korea's biggest automaker, might be below the market consensus because the company was forced to cut production due to a chip shortage, according to analysts.

Taiwan's MediaTek, the world's second-largest mobile chip processor provider after Qualcomm of the U.S., will host its earnings call for the July-to-September quarter. MediaTek counts China's Xiaomi, Oppo and Vivo as its key smartphone chip clients. However, Oppo is developing high-end mobile chips for its premium handsets in an attempt to reduce its reliance on Qualcomm and MediaTek.

Chinese battery cell maker Contemporary Amperex Technology Co. Limited will release Q3 results, followed by automaker BYD on Thursday. Both companies have come to investors' attention on the back of growing electric vehicle sales in China. Their year-to-date share prices have jumped by 48% and 32%, respectively.

Hong Kong Exchanges & Clearing reports third quarter results. Investors will be watching how much listings have slowed because of a regulatory clampdown by China, as well as the outlook for trading volumes as the company expands its derivatives business. This month it launched the China mainland stocks futures contract.

Ping An Insurance reports third-quarter results. Its shares have fallen 33% this year as investors fret over its property exposure. Impairments from its exposure to embattled developer China Fortune Land and Development wiped 20.8 billion yuan ($3.3 billion) from first-half earnings. Reuters reported in August that its property investments are being investigated by the banking and insurance regulator.

The Bank of Japan's quarterly outlook report is expected to keep its economic forecast mostly intact for fiscal year 2022 while trimming that for the current fiscal year. Worries include supply disruptions and surging inflation worldwide. The central bank is expected to maintain its ultra-easy monetary policy.

Analysts are watching whether the conglomerate has been able to maintain steady sales in it gaming business, which enjoyed a COVID-driven demand surge last year. The market will also be paying attention to whether Sony will comment on TSMC's plans to build a chip plant in Japan. Nikkei previously reported that Sony will jointly invest in the plant.

Samsung Electronics will release full Q3 results after unveiling earlier this month that both its operating profit and revenue soared sharply during the July-to-September period.

Luxshare will file its July-to-September results. The Shenzhen-listed Apple supplier officially started to assemble this year's flagship iPhones in late summer after acquiring a manufacturing plant from Taiwanese company Wistron in 2020. While many suppliers are still grappling with power supply restrictions in China, factories of Luxshare and its subsidiaries have been exempted from the power disruptions, Nikkei Asia has reported.

The world's fourth biggest contract chipmaker, which supplies Qualcomm and Sony, will host an earnings call to give the company's latest business outlook and update on the ongoing global semiconductor crunch. TSMC, UMC's bigger rival, recently told investors that the COVID disruptions in Southeast Asia in the past few months have worsened chip shortages.

The Japanese semiconductor maker is expected to post solid earnings for the July-September quarter thanks to strong chip demand. The company aims to deliver consistent growth after production disruptions this year and a slump in automotive chip sales in 2019.

Q3 results from Vanke, one of China's largest property developers, also come out on Thursday. The state-backed group was reportedly among the companies approached by Chinese authorities to absorb assets from debt-laden peer China Evergrande Group.

Prime Minister Ismail Sabri Yaakob is due to present his maiden annual budget in parliament, focusing on recalibrating the economy while treating COVID as endemic.

Evergrande, which narrowly averted a default last week by remitting $83.5 million in interest payments to bondholders, faces its next default deadline on Friday as the 30-day grace period for another $45.2 million in coupon payments ends. It also has a $14.25 million coupon due Saturday on its 9.5% January, 2022 bond. The company is fast running out of cash and is struggling to sell assets and attract investors.

Japan's All Nippon Airways will announce its July-September quarter results. The airline has suffered a rapid decline in passengers starting early last year due to the pandemic. For the current fiscal year, ANA revealed aggressive plans and it forecasts net profit of 3.5 billion yen ($31 million).

Mitsubishi Heavy Industries will report April-September results, which are expected to show that its profitability is on the mend as the industrial conglomerate shifts from COVID-hit aviation to clean technology, such as carbon capture and storage and hydrogen combustion. Investors are watching how quickly Mitsubishi Heavy will be able to turn these emerging technologies into solid business.

The leaders of the G-20 group of large economies will meet in Rome on Oct. 30 and 31 to discuss coronavirus, pandemic recovery, and climate change. Chaired by Italy this year, the summit takes place in the immediate lead up to COP26, and a major focus will be on climate commitments, including whether a consensus can be reached on phasing out unabated coal. The G-20 group accounts for more than 80% of world GDP and 60% of world population -- and around 75% of global greenhouse gas emissions.

World leaders meet in Glasgow from Oct. 31 to Nov. 12 for COP 26, the most important international discussions on climate since the Paris Agreement in 2015.

The signatory states of the Paris Agreement must reassess their commitments to reduce greenhouse gas emissions, in order to limit global warming to 1.5 degrees Celsius by the end of the century. But amid the COVID-19 pandemic and energy supply squeezes, governments are focused on economic recovery. International political tensions will also weigh on the negotiations.

Japan will go to the polls to choose its next government in a parliamentary election. The ruling Liberal Democratic Party is seen as being on the back foot after a difficult year dealing with COVID and the economic slump. The LDP is expected to lose seats -- the focus will be on whether it can retain its majority.