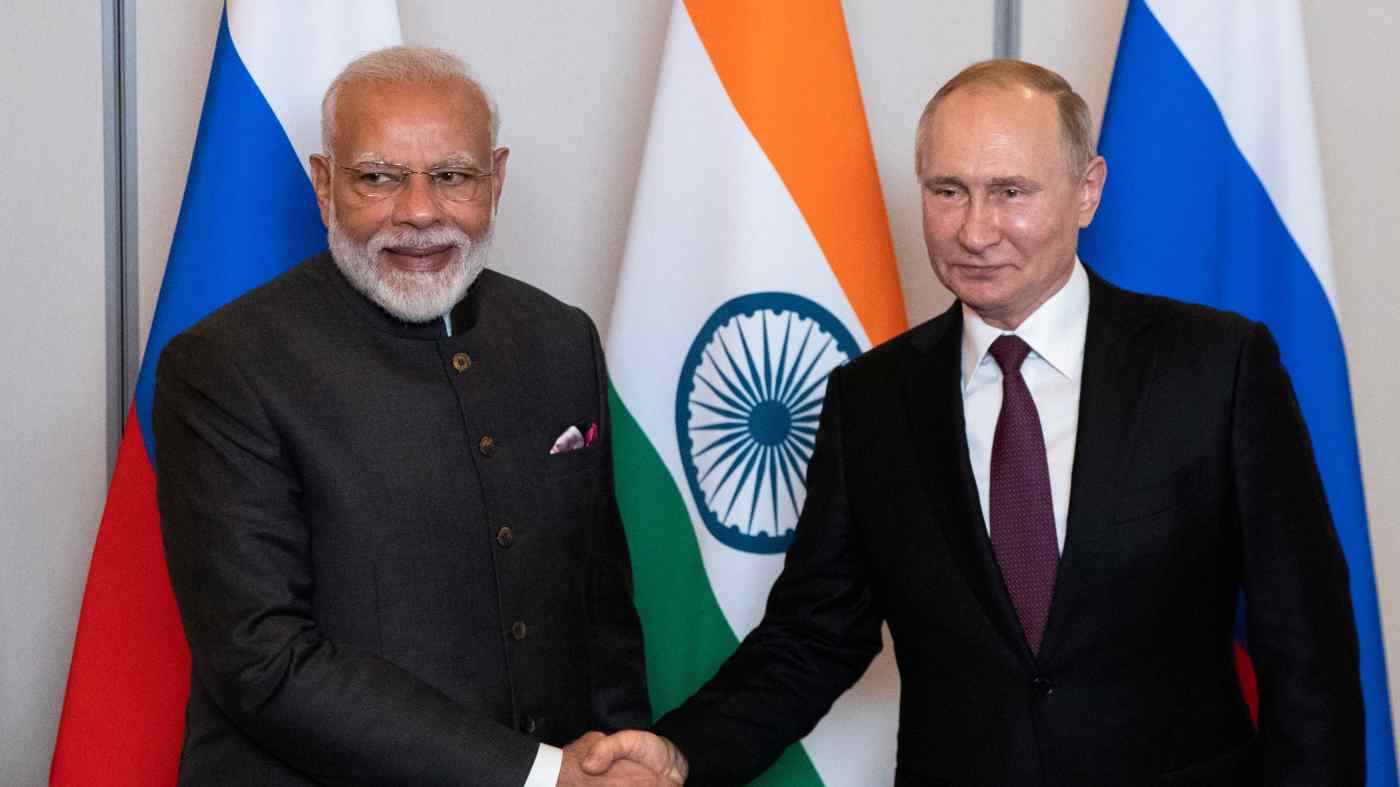 On Monday, the leaders of two major powers -- India and Russia -- are due to meet in New Delhi for their annual summit while in Japan, Prime Minister Fumio Kishida's policy speech to parliament will be closely watched. On Wednesday Japanese billionaire Yusaku Maezawa will become the latest tycoon to fly into space.

The latter part of the week will see two important events on both sides of the Atlantic. Although not many Asian countries were invited to the Summit for Democracy held by U.S. President Joe Biden, the inclusion of Southeast Asian nations at a foreign ministers meeting for Group of Seven countries to be hosted by the U.K. shows the country's intention to engage more with the region.

India has established a two-plus-two mechanism with just three other countries: its Quad partners, the U.S., Japan and Australia.

The U.S. Secretary of Commerce is due to submit a report recommending additional executive and legislative actions to address the risks posed by communications and financial technology software applications, such as TikTok and WeChat. This was requested by the White House to combat threats from China and other countries.

Background: In June, the White House revoked three Executive Orders by the Trump administration that were aimed specifically at TikTok, WeChat, and eight other China-linked apps. It issued a new order to review security concerns posed by these apps.

Japanese Prime Minister Fumio Kishida will deliver a policy address to the Japanese parliament, which reconvenes for a 12-day extraordinary session. His focus will be on passing an extra spending program worth nearly $320 billion, the largest ever, to stimulate the economy. The speech is also expected to underline the need for a more robust economic security regime and stronger military capabilities.

Chinese e-commerce giant JD.com and gaming company NetEase will be included in Hong Kong's benchmark Hang Seng Index, which has fallen by more than 20% from its peak in February. Consumer stock China Resources Beer and natural gas distributor ENN Energy Holdings will also join the index. Meanwhile, embattled property developer China Evergrande Group, whose shares have fallen more than 90% from their July peak due to a debt crisis, will be removed.

In a debate from Tuesday to Wednesday, British lawmakers in the House of Commons could vote on whether to extend eligibility for a British citizenship to Hong Kongers born after 1997. The additional clause proposed for the Nationality and Borders Bill, if chosen for debate and adopted, will make those from Hong Kong who have at least one parent with British National Overseas (BNO) status eligible to apply independently for the new immigration route launched earlier this year for Hong Kong BNO status holders and their dependents. If the amendment and the wider bill are passed, it will then be debated in the House of Lords, and become law once approved by both houses.

Background: BNO status was granted to Hong Kong residents before the territory returned to Chinese rule in 1997. In 2020, the U.K. announced a new immigration route and path to citizenship for BNO status holders and their dependents in Hong Kong -- estimated to total 5.2 million people -- in response to the sweeping national security law imposed by Beijing on the former British colony.

The new visa program was launched in January this year. It allows BNO passport holders to work and study in the U.K. for up to five years, and to apply for permanent residency and British citizenship afterward. Under the current scheme, however, people born after 1997 must be accompanied by a parent with BNO status to move to the U.K.

Japanese billionaire entrepreneur Yusaku Maezawa and his crew will travel to the International Space Station aboard a Russian Soyuz rocket, making Maezawa and his crew the first Japanese space tourists to the ISS. The 12-day trip aims to prepare Maezawa for a journey around the moon as part of SpaceX's first civilian moon mission in 2023.

Weibo, the Chinese equivalent of Twitter, with 566 million monthly average users, begins trading in Hong Kong at price of $272.8 Hong Kong dollars and is set to raise $193 million. The Nasdaq-listed company, in which Sina Corp. has a 44.4% stake and Alibaba 29.6%, filed a draft prospectus with the Hong Kong stock exchange last month. It is part of a string of Chinese companies making secondary listings in Hong Kong as U.S. regulators tighten scrutiny of Chinese concerns. Weibo's current market capitalization is around $7.37 billion.

Japan will release revised GDP data for July to September that is expected to confirm a hitch in the country's economic recovery. Preliminary data released on Nov. 15 showed the economy contracted 0.8% from the previous quarter and shrank 3%, year on year.

China reports November producer prices, which soared in October due to high commodity prices. Recent economic activity, however, points to abating headwinds, with the official manufacturing Purchasing Manager's Index (PMI) returning to growth trajectory of 50.1 the first in three months after raw material prices and the energy crunch eased. November's consumer price index will be unveiled the same day.

U.S. President Joe Biden kicks off the virtual, two-day "Summit for Democracy" that he promised to hold in his election campaign. Participants will be encouraged to announce initiatives to counter authoritarianism, combat corruption and promote human rights.

With 111 countries and regions taking part, the invitation list has been criticized for being political. Pakistan and Taiwan will attend, but not Sri Lanka or Hong Kong. Of the 10 member states of the Association of Southeast Asian Nations, only Indonesia, Malaysia and the Philippines received invitations.

British Foreign Secretary Liz Truss hosts her counterparts from the G-7 and ASEAN countries for a G-7 foreign and development ministers meeting in Liverpool from Friday to Sunday. The invitation to ASEAN countries is a sign of the U.K. government's policy "tilt" toward the Indo-Pacific, as it seeks to increase engagement with the region.

Ministers will discuss global health, post-pandemic economic resilience and human rights. Truss has said she wants to build a "worldwide network of liberty" to advance values such as freedom, democracy and enterprise.

China marks its 20th anniversary as a member of the World Trade Organization. Its accession has helped China become the world's second-largest economy, but the continued closure of some of its markets have drawn rising complaints from trading partners.

Voters in New Caledonia will vote "oui" or "non" for the third and final time on Sunday on whether to "accede to full sovereignty and become independent" from France after more than 150 years as a colony.

Voters in the mineral rich archipelago are seen as likely to again stick with Paris and reject independence. But the credibility of the result might be questioned if many people heed a boycott call by a pro-independence group, which argues the vote should be delayed until the COVID-19 pandemic abates.