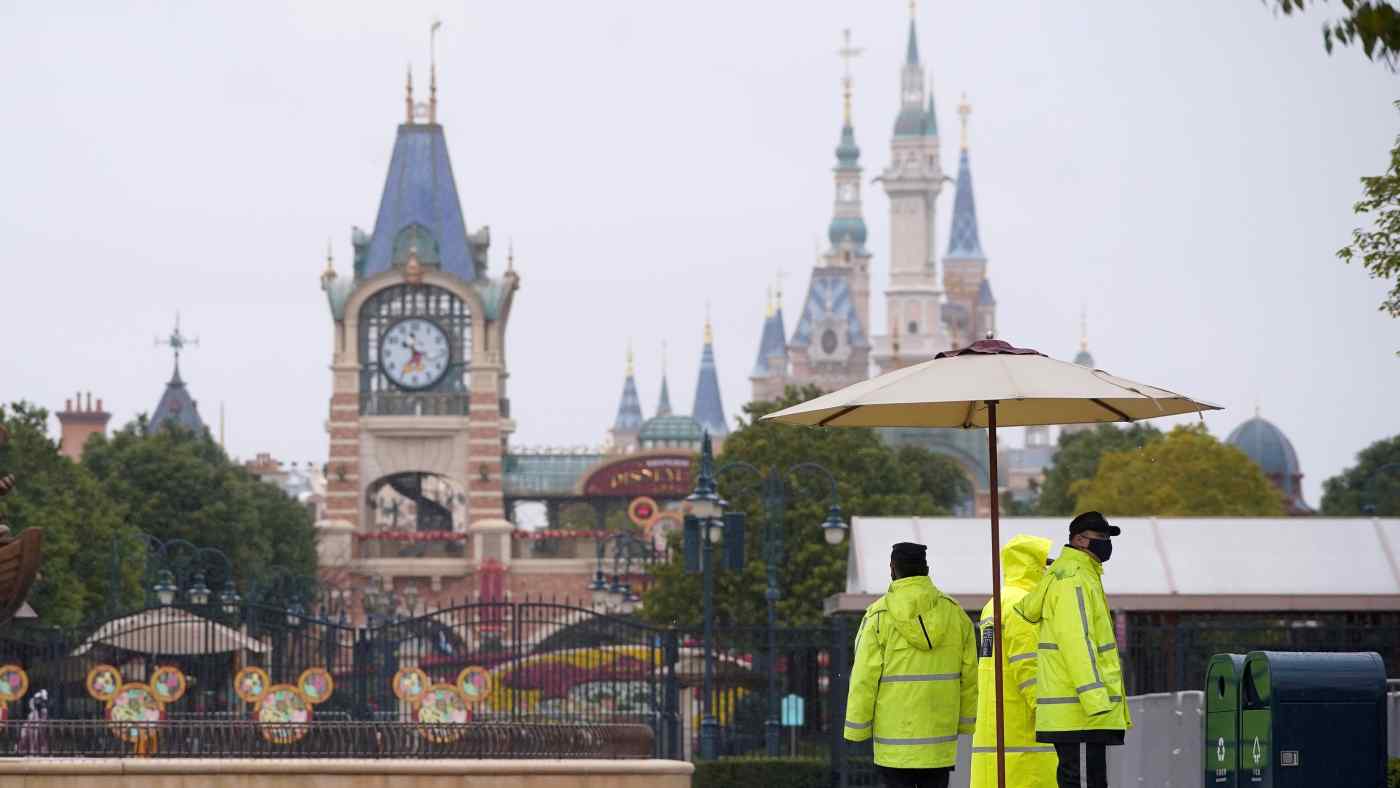 Shanghai Disneyland will reopen this week since it closed on January 25 amid China's coronavirus lockdown.    © Reuters
May 10, 2020 18:00 JST | Japan
CopyCopied

The coming week will be full of results from some of Japan's biggest companies, including the Big 3 banks. Results will also come from Singapore Airlines, Tencent Holdings, and China's top chipmaker.

Economies in Southeast Asia may soon show signs of life, as coronavirus measures are set to expire this week in Malaysia, Myanmar, Singapore and the Philippines, where the island of Luzon and the capital Manila have been under lockdown for eight weeks. Schools in Vietnam and South Korea are also scheduled to reopen.

Monthly economic data are expected from China this week include April's consumer price index and auto sales on Tuesday, followed by retail sales and the industrial production index on Friday.

Three months after it closed, Shanghai Disneyland will be the first Disney theme park to resume business, though admission will be limited. Tickets for the first three days were snapped up quickly when they went on sale on Friday.

The closure of theme parks and related businesses worldwide dealt a blow of roughly $1 billion to Disney's second quarter operating income. Parks in Hong Kong, Tokyo, Paris and the U.S. will remain closed.

Asahi Group Holdings will announce results for the January to March quarter on Monday. Sales of Asahi Breweries' "Super Dry" brand in March fell 28% year-on-year, the second largest drop since February 2009. Asahi's results will be followed by rival Kirin Holdings on Tuesday.

Related: In March, Kirin fended off a challenge from an activist investor.

SoftBank Corp, the Japanese mobile arm of Masayoshi Son's SoftBank Group, will announce earnings for the fiscal year ended in March. With demand for online services growing in Japan amid the coronavirus outbreak, analysts hope a solid performance can offset a wave of bad news from SoftBank's tech investments around the world.

Mitsubishi Heavy Industries' aerospace business has been hit by the prolonged production hiatus at Boeing, a major client. Investors are looking forward to earnings guidance for the current year, as well as a status update on the SpaceJet passenger aircraft program and the company's outlook for the aviation industry.

Tuesday will be the third bitcoin "halving" since the most traded cryptocurrency was created, but the first amid an economic downturn and unprecedentedly aggressive monetary easing by the world's central banks.

What's a "halving"? Every four years, the amount of bitcoins that can be mined is cut in half. The process is built into bitcoin's algorithm until 2041, when the last bitcoin will enter circulation.

What's going to happen? Since a rout in March that saw the daily price plunge by as much as 40%, bitcoin has been climbing steadily ahead of the halving, breaching $10,000 last week. But instead of a post-halving rally from the supply contraction, analysts are forecasting a sideways market.

Full-year results from Honda and Toyota

Japan's Toyota Motor and Honda Motor on Tuesday will report earnings for the fiscal year ended in March. Both carmakers are expected to outline their plans for weathering the coronavirus-induced economic contraction. Toyota and Honda plan to resume U.S. production on Monday, but disruptions to the global supply chain remain and demand has plunged. Investors are also watching for signals about the carmakers' strategy for autonomous driving and other next-generation technologies.

Shareholders of Li & Fung, the world's largest sourcing company of consumer goods, will cast votes on Tuesday to determine whether its founding family's bid to take the 114-year-old company private will be successful. The Hong Kong-based group has lost 95% of its market value since 2011 amid challenges from e-commerce companies and uncertainties stemming from the US-China trade dispute. The COVID-19 pandemic has hit business this year. Japan's biggest cosmetic and skincare company Shiseido will announce quarterly results on Tuesday. About 10% to 20% of Shiseido's sales come from travel retail, including shops in airports and the Chinese market, which is just beginning to recover from the coronavirus.

The electronics-to-entertainment conglomerate will report full-year earnings on Wednesday. Sony hiked its profit and sales forecasts for fiscal 2019 in February, thanks to strong sales in the image sensor business. But the company has since warned that it may not be able to hit those targets, as the coronavirus forced four factories in China to halt production. Along with full-year results, there may be an announcement about the PlayStation 5 launch.

The South Korean government will release April jobs data, after the country lost 680,000 jobs in March, marking the sharpest pace of unemployment since 1999.

Tencent Holdings is set to report January-March earnings on Wednesday. Tencent, which holds the lion's share of the Chinese gaming market, is among a handful of winners amid the coronavirus pandemic as the number of gamers skyrocketed during the lockdown.

Like its rival Alibaba, Tencent has also enjoyed a boom in so-called "mini programs" in their popular apps, as the closure of brick-and-mortar operations forced businesses to go digital, bringing in more revenue from ads and digital payments.

Semiconductor Manufacturing International Co.(SMIC) will discuss its first-quarter earnings call on Thursday. SMIC, which is listed in Hong Kong, has announced that it will also list on Shanghai's STAR Market tech board, the Chinese equivalent of Nasdaq. The Beijing-sponsored chipmaker delisted itself from the U.S. last year, a move to slash financial ties with the U.S. and to avoid scrutiny by American authorities. But the chipmaker still heavily relies on American chip-making equipment and materials.

New Zealand's finance minister Grant Robertson has said the government's top spending priorities -- including on mental health, raising indigenous income, reducing child poverty and digital innovation -- would be "put on ice" so the government could focus on recovering from the coronavirus. The revised budget will come a day after the Reserve Bank of New Zealand releases its quarterly monetary policy statement.

With no domestic routes, Singapore Airlines has been severely hit hard by the global pandemic, cutting capacity by 96% and grounding most planes. The crude price plunge has been another blow, as the company had hedged at a higher price.

To survive the hard times, Singapore Airlines is raising up to 15 billion Singapore dollars ($10.5 billion) from existing shareholders, including state investment company Temasek Holdings, through the sale of new shares and convertible bonds.

Bottom lines for Japan's three largest banks, MUFG, SMFG and Mizuho, are likely to have come under pressure as the banks boost provisions for possible loan losses amid a sharp downturn in the economy. Their earnings guidance for the current fiscal year is likely to underline a difficult balancing act between supporting businesses and keeping loan losses under control, as the economy goes through an extended slump this year.

An e-commerce lift for JD.com?

Nasdaq-listed JD.com is scheduled to report January-March earnings on Friday. The second-largest Chinese e-commerce operator after Alibaba Group Holding has impressed many in the country with its robust logistics service during the lockdown. Investors will be watching whether JD.com has managed to translate its delivery prowess into commercial success. Friday's results will matter to the company's efforts to raise $3.2 billion in a secondary listing in Hong Kong.