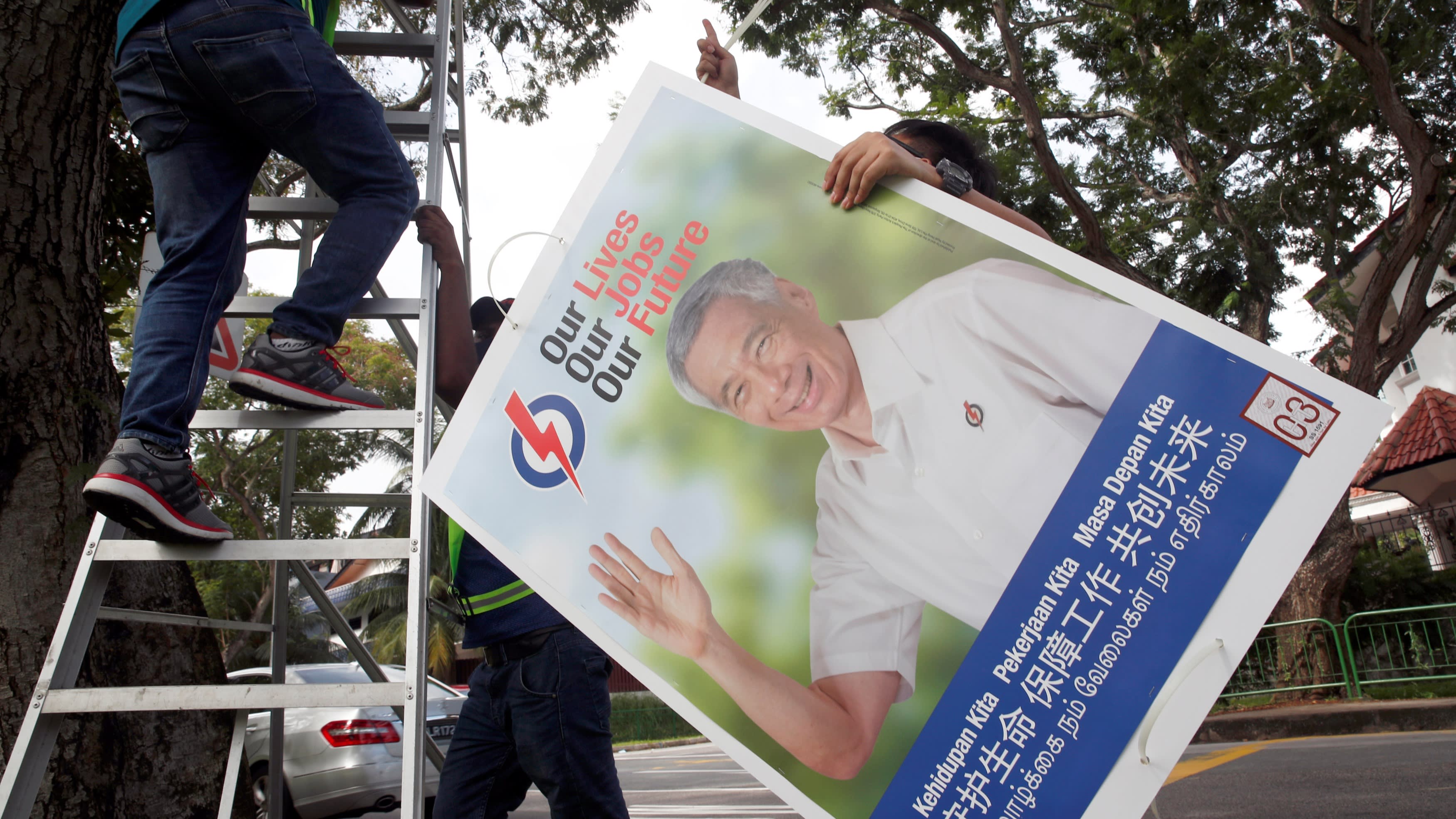 Singaporeans will on Friday go to vote for general elections that would likely give People's Action Party a fresh new term to lead the country.    © Reuters
July 5, 2020 18:00 JST | Singapore
CopyCopied

This is a big week in Singapore, which will hold general elections on Friday. A hearing by U.S. Securities and Exchange Commission on Thursday will increase the scrutiny of Chinese companies listed on American stock exchanges. In monetary policy, the central banks of Malaysia and Australia will have meetings on Tuesday.

Malaysia's central bank will meet Tuesday as the country faces the risk of a second coronavirus wave. According to a Reuters poll, Malaysia appears set for an interest rate cut. The Reserve Bank of Australia will also meet Tuesday.

Nearly 11 million students in China will sit for the gaokao college entrance exam, considered the most important test of a Chinese student's life. The exam, scheduled through Friday, comes a month later than planned due to the coronavirus pandemic.

Besides determining which university students will be eligible to attend, this year's gaokao will also test the effectiveness of the country's virus prevention measures. Classrooms will have to be carefully disinfected, and health checks will be conducted on students and teachers.

Samsung Electronics will announce its guidance for the second quarter, which analysts believe was helped by robust demand for semiconductors used in computer servers.

But South Korea's largest conglomerate has a cloud hanging over it as prosecutors pursue Vice Chairman Lee Jae-yong over a market manipulation allegation dating back to 2015. The prosecution will decide whether to indict the Samsung heir soon after completing its 19-month investigation into the case.

The family of late Macao casino tycoon Stanley Ho, who fathered 17 children by four women, will hold a private funeral service in Hong Kong. Members of the public will be invited to pay their respects on Thursday. Ho died at 98 on May 26. He is to be entombed in Hong Kong on Friday.

South Korea is among the nations nominating a candidate for World Trade Organization director-general, a post currently held by Brazilian Roberto Azevedo, who will step down in August. The deadline for nominations is Wednesday, and candidates from Mexico, Nigeria, Egypt and Moldova are also standing for the four-year posting.

The U.S. Securities and Exchange Commission will hear the views of investors, regulators and other experts on the risks of investing in China. The roundtable meeting comes as Chinese companies listed in the U.S. are facing pressure to allow auditors to examine their books.

The U.S. Senate in May approved a bill that could force mainland companies to delist if they fail to comply with U.S. regulatory audits for three consecutive years. China's Securities Regulatory Commission rules require audit papers for overseas-listed Chinese companies to be held in mainland China, and these documents cannot be examined by foreign regulators. About 247 Chinese companies, with a collective market value of around $1.5 trillion, are listed on American exchanges.

Shanghai will open the three-day World Artificial Intelligence Conference on Thursday, where tech executives including Qualcomm President Cristiano Amon, Baidu CEO Robin Li and Sinovation Ventures Chairman Lee Kaifu will speak. This will be the first virtual meeting for the Beijing-backed event, which debuted in 2018.

Fast Retailing, owner of Japanese clothing brand Uniqlo, will announce earnings for the March-May quarter. The results will reveal the impact of store closures in many of its markets due to the pandemic. In Japan, Uniqlo's same-store and online sales plunged by more than 50% in April, when the country was under a state of emergency. In China, many of its stores had resumed operations by March.

Seven & i Holdings, which owns global convenience store chain Seven-Eleven, will also announce its March-May earnings. The convenience store business, which is the holding's core segment, and York-Benimaru supermarkets are expected to be less exposed to the impact of COVID-19. While some stores suffered as crowds disappeared from offices and amusement sites, overall monthly sales for convenience stores in Japan only declined by around 5.6% during the quarter. Supermarket sales increased, while the company's general merchandise stores, department stores and restaurant businesses struggled during the same period.

Singaporeans on Friday vote in general elections that will likely give Prime Minister Lee Hsien Loong's People's Action Party a new term to lead the country through the pandemic and the changing geopolitical landscape.

Polls close at 8 p.m. local time, and full results are expected to be announced early Saturday morning. According to COVID-19 safety measures, seniors are encouraged to vote in the morning. Those who have a fever or other symptoms are being asked to vote between 7 p.m. and 8 p.m. COVID patients are not allowed to vote.

A total of 192 candidates are competing for 93 seats, with most constituencies being two-way fights between the PAP and one of 10 opposition groups, including the Workers' Party -- the biggest opposition player -- and the new Progress Singapore Party, to which the prime minister's estranged brother, Lee Hsien Yang, belongs. With the PAP widely expected to win, a key focus will be on its overall share of the vote, which will be seen as an indicator of support for the current government.

Chinese vaping device maker Smoore International makes its market debut after raising about $900 million through the largest initial public offering so far this year in Hong Kong. The company's listing comes as governments across the world clamp down on the use of e-cigarettes, including by imposing higher taxes. China, its biggest market, late last year issued a notice urging the industry to stop selling and advertising electronic cigarettes online. Hong Kong doesn't have specific legislation governing e-cigarettes, but products with more than 0.1% of nicotine can only be sold by a licensed medical dealer.

Imperial Pacific International, a Hong Kong-listed company controlled by Chinese investors, faces a deadline from gaming regulators in Saipan, the U.S.-controlled Pacific island where the company has a casino monopoly, to appoint a new chief executive. The company, which has fallen behind on tax and vendor payments, lost its last CEO in December when Mark Brown, a veteran of Trump Hotels and Casinos and Las Vegas Sands, abruptly departed for the second time. The void "has led to grave mismanagement," according to the regulator.

Hong Kong's pro-democracy camp will hold primary elections in a bid to sweep the board in Legislative Council elections in September. The council elections are designed in a way that favors pro-Beijing parties, making primaries necessary for the pro-democracy camp to assemble a lineup of candidates with the best chance of taking control of the council. The polling comes as Beijing tightens its control of the territory with the new national security law.

The tourism sector on the island of Bali, hit hard by the pandemic, will hold mass prayers ahead of the reopening of domestic travel despite Indonesia's increasing number of infections.