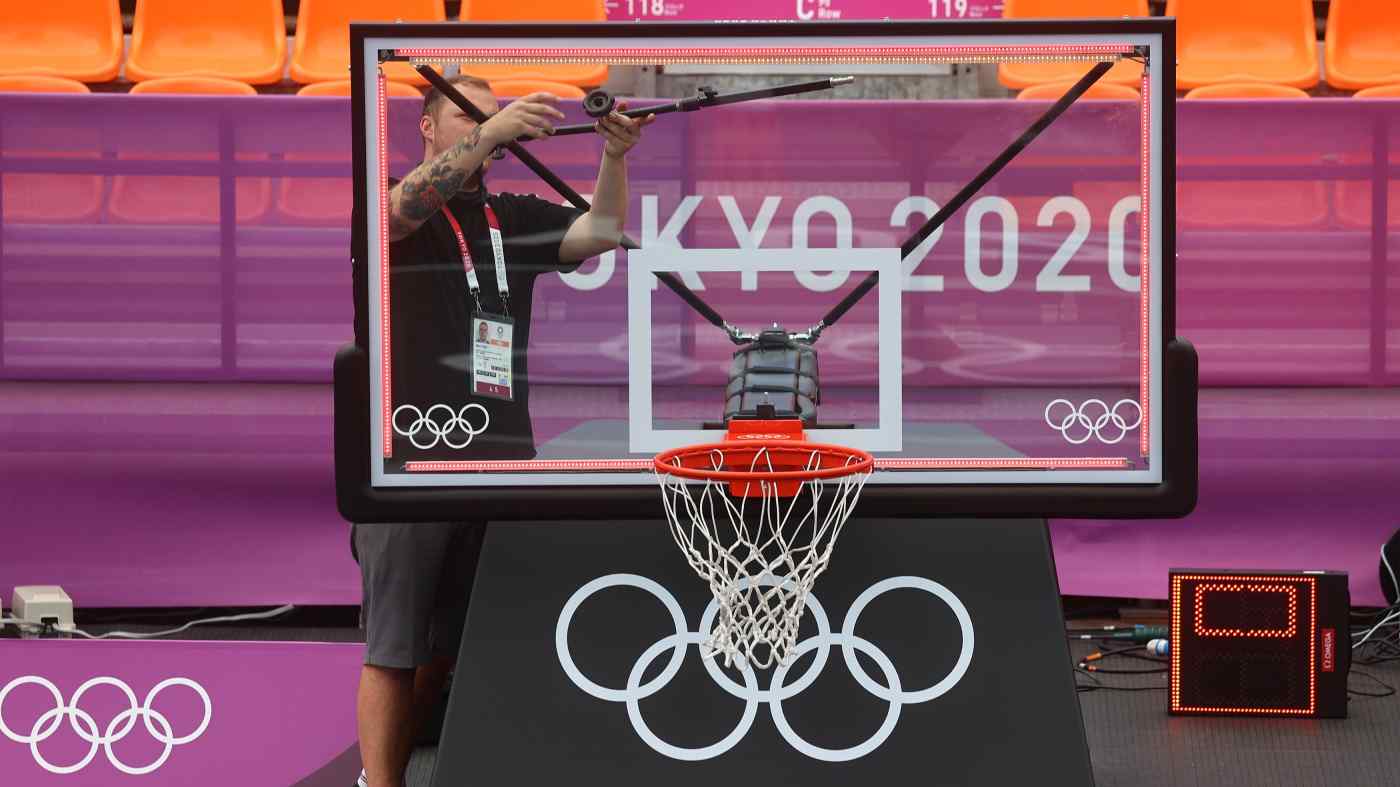 A worker installs a net cam at the 3x3 basketball venue on July 17 for the Tokyo Olympics: Spectators have been barred from the events to limit the spread of COVID-19.   © Reuters
July 18, 2021 18:07 JST | Japan
CopyCopied

U.S. Deputy Secretary of State Wendy Sherman arrives in Asia for a weeklong tour that will take her to Japan, South Korea, Mongolia. In Tokyo, she will join her Japanese and South Korean counterparts to discuss North Korea, climate change, global health and other security issues.

Time for the Taylors

Former American Green Beret Michael Taylor and his son Peter are due in a Tokyo court to receive their sentences for helping former Nissan Motor Chairman Carlos Ghosn flee Japan and evade trial in 2019.

Prosecutors are seeking prison terms of two years and 10 months for Michael Taylor and two years and six months for Peter. The two were extradited by the U.S. in March. Both have pleaded guilty and have said they regret their actions.

Muslims in Southeast Asia celebrate the festival of Eid al-Adha, or the Feast of Sacrifice, a day ahead of their peers in South Asia. The festival comes as many countries in both regions continue to struggle with COVID-19, with authorities urging people to maintain social distancing and wear masks during public celebrations.

Summer surge: Although daily infections in India have dropped to fewer than 50,000 from a peak of over 400,000 in May, experts warn the number could rise again in August. The Hindu-majority country is home to the world’s third-largest Muslim population, behind Indonesia and Pakistan.

Brisbane reaches for the rings

The International Olympic Committee is expected to confirm Brisbane as the host of the 2032 Summer Games after the body's executive board earlier named the Australian city as the "preferred bidder."

Indonesia, Qatar, China and Hungary had also submitted bids in a process that has raised questions about John Coates' dual role as vice president of the IOC and president of the Australian Olympic Committee. The IOC has said Coates recused himself from discussions about Brisbane.

Hong Kong lawmakers will begin debate on amendments to the city's privacy laws to give regulators vast powers to curb what the authorities describe as "rampant doxxing activities," as the authorities further tighten access to information in response to moves by activists to post the personal information of police officers and government officials during anti-government protests in 2019.

A trade group representing Google, Facebook, Twitter and other global internet platforms has warned that the draft bill would put their local staff in legal jeopardy and could prompt them to stop investing or operating in the city.

A Hong Kong court will sentence seven men found guilty of involvement in a 2019 attack on pro-democracy protest supporters and passersby at a suburban train station. The incident at Yuen Long Station left dozens hospitalized and shook public confidence in the police due to the force's slow response to emergency calls and failure to take action at the time.

Some of those injured in the incident await trial on charges of rioting while a journalist who investigated the event was fined 6,000 Hong Kong dollars ($772) after being found guilty of improperly accessing the city's license-plate database.

Executives from South Korea's largest steelmaker may address the company's plans to cope with the European Green Deal when it posts second-quarter earnings. The European Union's planned tariffs on carbon-intensive products such as steel and cement from countries with looser environmental regulations, announced last week, pose a threat to POSCO's shipments to the continent.

The Olympic Games opening ceremony usually serves as a cultural and political showcase for the host country. But like much of the rest of Japan’s Olympic effort, plans for the kickoff event have faced many setbacks, including the resignation of three directors due to scandal.

Tokyo’s 68,000-seat National Stadium, built at a reported cost of $2.7 billion, will be mostly empty during the ceremony. Athlete attendance for the Parade of Nations is uncertain, with many teams likely choosing not to march to reduce infection risks. Blue Impulse, the Japan Air Self-Defense Force’s aerobatic squadron, will fly over the stadium, drawing Olympic rings in the sky.

Attention will be on Foxconn Chairman Young Liu as he answers shareholders’ questions at the key iPhone assembler's annual general meeting in Taipei, and offers his outlook on business prospects for the second half of the year. He is expected to give an update on the company's growing electric vehicle business.