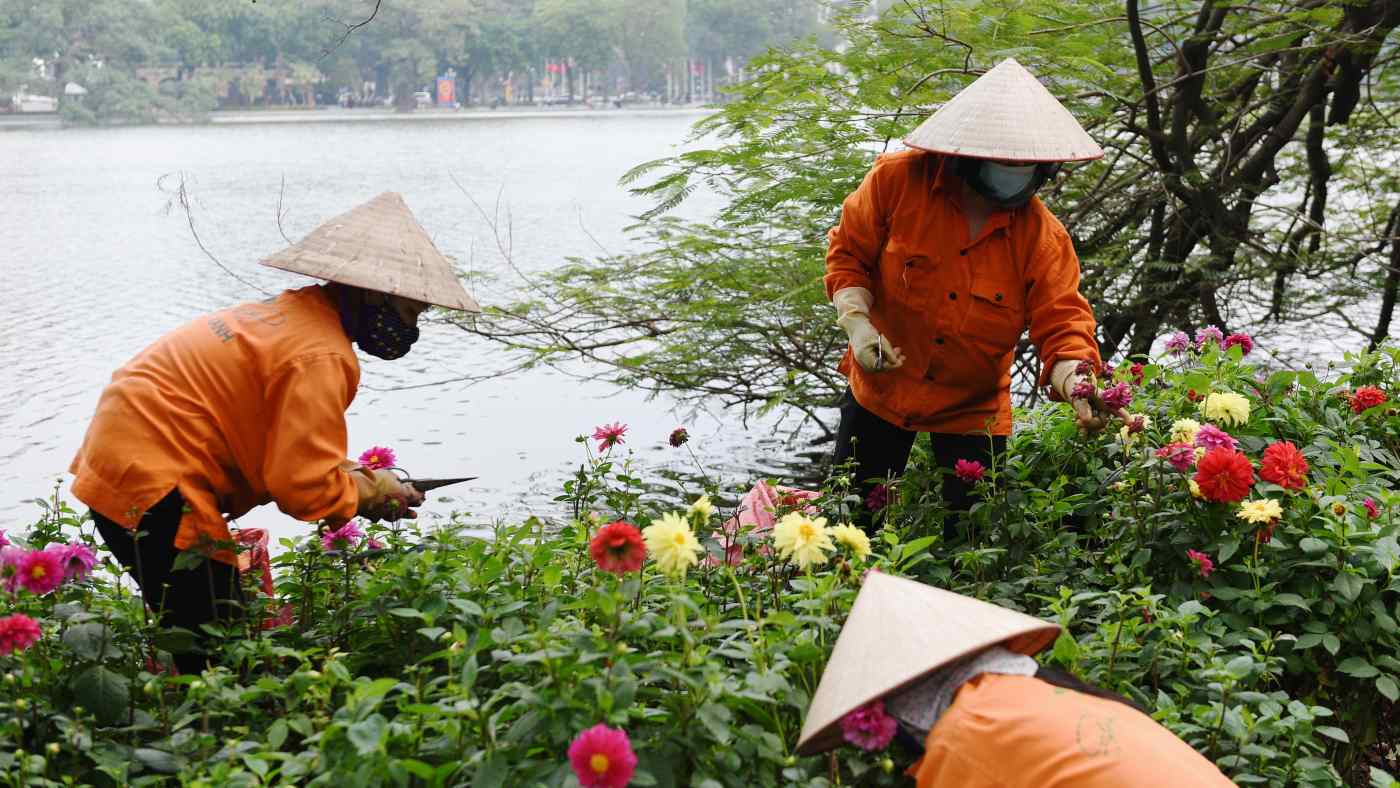 Gardeners wearing masks work at Hoan Kiem Lake in Hanoi, in February. Vietnam is targeting 6% to 6.5% growth on a recovery in tourism, textiles and other pandemic-hit sectors.   © Reuters
March 28, 2021 18:12 JST | Japan
CopyCopied

All eyes are on the blocked Suez Canal, but some key events across Asia this week will offer a glimpse into how strongly the global economy is rebounding from the coronavirus pandemic.

Monday will kick off with Vietnam releasing first-quarter gross domestic product figures. The country was one of the few in the region that managed to expand its economic output in 2020. On the business side, a string of Asian airlines, Huawei Technologies and Taiwanese iPhone assembler Foxconn Technology Group are expected to report earnings.

Some important political developments will take place as well. China's National People's Congress Standing Committee will meet to overhaul the electoral system of Hong Kong, while Hong Kong media mogul Jimmy Lai and other veteran democracy activists are to receive verdicts in their trial on charges related to a 2019 anti-government protest.

The National People's Congress Standing Committee, China's top legislative body, will commence a two-day meeting in Beijing where top officials are set to amend Hong Kong's constitution to implement a recently approved plan to overhaul the city's electoral system. The amendments to the Basic Law would empower a Beijing-controlled committee to vet and nominate candidates for the city's legislature and effectively remove opposition voices.

Chinese streaming site Bilibili makes its Hong Kong stock market debut after raising $2.6 billion. Investors will be seeking a strong opening after recent offerings in the city, including that of online search operator Baidu, disappointed. A first-day pop is crucial to keep the momentum going as companies including Tencent Music Entertainment line up to list in the city as a hedge against possible forced delisting in the U.S.

The country's first-quarter output figures will shed light on the direction of growth in the Southeast Asian country, which managed to expand its economy by 2.9% in 2020 -- among the highest rates recorded globally but a record low for the communist country. The country is pinning its hopes of reaching a targeted annual range this year of 6% to 6.5% on a recovery in tourism, textiles and other pandemic-hit sectors.

The Malaysia-based airline group warned earlier this month that it will have to furlough more workers unless domestic coronavirus travel curbs are relaxed in April. It is expected to report that its losses continued in the October-December quarter, with analysts doubtful of any return to profit before next year.

Automotive-focused Japanese chipmaker Renesas Electronics will update on the outlook for reopening its factory in Hitachinaka where it was forced to halt production after a fire. The company has said production may take up to a month to resume, adding fresh concerns over a global chip crunch affecting carmakers.

The three big Chinese state-owned carriers -- China Southern Airlines, China Eastern Airlines and Air China -- are scheduled to report annual earnings after the market closes. Even though Chinese airlines have been able to resume most domestic services to near pre-COVID levels, the trio are expected to report substantial net losses for 2020.

Young Liu, chairman of key iPhone assembler Foxconn, the world's biggest contract electronics manufacturer, will host the company's annual earnings conference online. Liu has been trying hard to steer the gigantic manufacturer toward electric vehicles and recently said the company will finalize a plan later this year to build cars in either Wisconsin or Mexico.

China's embattled Huawei Technologies will host a media event on Wednesday afternoon to share its earnings performance for the whole year of 2020. The unlisted maker of telecommunications equipment and smartphones has been under attack by the U.S. government for years now. With its access to microchips restricted, shipments of its smartphones dropped 21.5% last year.

Debt-laden China Evergrande Group will update investors on the progress of its efforts to cut its $110 billion debt load as part of its annual results. At last report, the developer, which is pursuing a costly plan to break into electric vehicle production, was failing all of the so-called "three red lines," financial metrics set by regulators last year to reduce risk from indebted real estate companies.

The World Economic Forum will publish a new look at gender equality in terms of education, health, politics and economy for the nations of the world. Attention will be paid to whether and how much the pandemic has impacted women's positions. One country that will be in the spotlight is Japan, whose poor standing -- it ranked 121st out of 153 countries in terms of gender quality in last year's report -- was recently highlighted due to sexist remarks by Olympics organizers.

Newspaper publisher Jimmy Lai is due to receive a verdict in the first of several cases in which he faces criminal charges related to Hong Kong's 2019 anti-government protests. Verdicts are also due for eight other veteran pro-democracy activists facing charges of unauthorized assembly in relation to a August 2019 demonstration. If convicted, they could face up to five years' imprisonment.

The Bank of Japan's closely watched quarterly Tankan survey is expected to show an improvement in business sentiment among large domestic manufacturers for a third straight quarter. But the survey is also expected to show that their business recovery remains uneven, with small businesses and consumer-facing industries still struggling.

After a four-day visit to Taiwan, Palau President Surangel Whipps Jr. will return home with a group of Taiwanese tourists to inaugurate a new quarantine-free travel bubble between the two island allies. Both have been highly successful in preventing the spread of COVID-19, but have been largely closed to international visitors since March 2020.

Vietnam's next president will be announced officially to the National Assembly, which is to convene on Wednesday. Local media report that Nguyen Xuan Phuc will move into the role from prime minister. He is likely to be succeeded in that position by Pham Minh Chinh, bringing another public security official into the highest echelons of power. Analysts believe Vuong Dinh Hue, a former finance minister, will be named as the new chair of the National Assembly, another powerful position.