WHO vote on Taiwan, China's NPC convenes and Fujifilm earnings 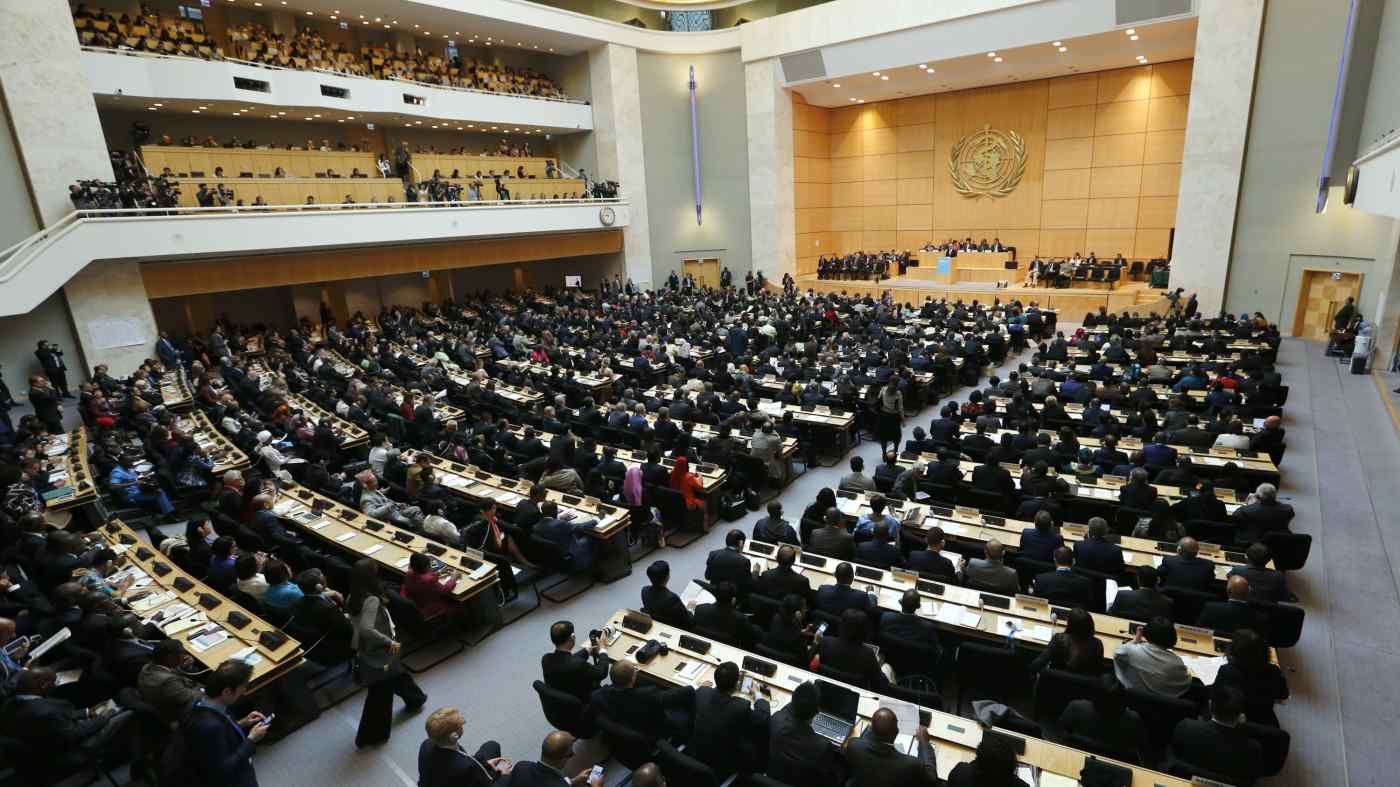 The week will open with the World Health Assembly, the decision-making body of the World Health Organization, where countries are slated to vote on the highly-charged issue of whether to include Taiwan as an observer -- a move strongly opposed by Beijing. The vote should produce some interesting mood music for major political events later in the week: the National People's Congress in Beijing and President Tsai Ing-wen's inauguration for a second term in Taipei.

Economic data will come from Japan with quarterly GDP on Monday and Hong Kong with monthly unemployment on Tuesday. The fourth stage of India's nationwide lockdown also begins this week, while central banks in Indonesia and Thailand will hold monetary policy meetings. Annual results are expected from two Japanese companies in the news -- SoftBank Group and Avigan maker Fujifilm Holdings.

The World Health Assembly gathers on Monday to discuss the coronavirus, but all eyes will be on the Taiwan vote. Although Taiwan has "extremely slim" odds of success, the vote will be seen as a referendum on China's influence as a crisis that originated within its borders continues to plague member states.

The pros: Eight countries, including the U.S. and Japan, have expressed support for Taiwan's inclusion in the WHA. Taiwan has earned plaudits for its response and containment of the coronavirus.

The maybes: Any country that counts China as its largest trading partner is in the crosshairs. Even a few votes more than the expected minimum of 22 states in Taiwan's favor would send a message to Beijing.

Huawei Technologies' annual three-day global analysts' summit will be streamed from the Shenzhen headquarters starting on Monday. The summit, where the Chinese tech giant typically shows off its latest innovations, coincides with the first anniversary of its addition to the U.S. Entity List, restricting its access to American technologies. U.S. President Donald Trump last week extended the ban on purchases of Chinese-made telecoms equipment by American carriers.

SoftBank Group has already warned of a 900 billion yen ($8.4 billion) loss for the fiscal year ended March, its largest ever loss, as the coronavirus pandemic hit its investment portfolio hard. With the virus's end still out of sight, analysts will be watching whether Masayoshi Son, SoftBank's billionaire founder and chairman, will maintain his aggressive investment strategy.

Thailand's National Economic and Social Development Council is scheduled to announce gross domestic product for the quarter ending March. Southeast Asia's second largest economy has likely shrunk year-on-year over the three months, due to the coronavirus.

The Bank of Thailand expects that the economy will further contract in the second quarter. In a policy meeting scheduled for Wednesday, the central bank may move to support the economy by easing its monetary policy for the third time since the beginning of the year.

April trade statistics from Singapore will be an indicator of how the coronavirus lockdowns has affected the movement of goods in the region. For Singapore's small and open economy, disruptions in its top five trading partners -- China, Malaysia, the U.S., the European Union and Taiwan -- could deal a critical blow.

Will Alibaba appear on the Hang Seng Index?

Hang Seng Indexes will decide whether to include Alibaba Group, Meituan Dianping and Xiaomi in Hong Kong's main share indexes. The decision will follow debate over whether the benchmark Hang Seng Index and Hang Seng China Enterprises Index should allow companies with different share classes and secondary-listed companies. If approved, the move would follow HKEX's decision in 2018 to loosen its requirements, paving the way for Alibaba to list in Hong Kong in late 2019.

Nasdaq-listed Baidu will release January-March quarterly earnings on Tuesday. The Chinese search engine giant's efforts to strengthen its mobile search engine and AI technologies are expected to have catalyzed top-line growth. Baidu's revenues were up 6% year-on-year to 28.9 billion yuan ($4.15 billion) in the previous quarter, but the coronavirus drag on China's economy has weighed on advertising.

Results from Lenovo and Xiaomi

Supply disruptions in the March quarter have affected Lenovo Group, the world's largest notebook computer maker, as much as competitors HP, Dell, Acer and Asustek Computer. But the global spike in telework, gaming and entertainment has driven laptop demand to a record high this quarter, which may buoy Lenovo's first quarter results on Wednesday.

Less rosy results will come on the same day from Xiaomi. The world's No. 4 smartphone company has been hit hard by lockdown measures in Southeast Asia and India, where Xiaomi's manufacturing partners have been ordered to suspend production.

For her second and final inauguration, Taiwanese President Tsai Ing-wen will have a simple ceremony due to the coronavirus. Although Taiwan is expected to lose in its push for observer status in the World Health Assembly due to Beijing's pressure, Tsai's handling of the pandemic has helped her popularity -- not only domestically but also internationally. Look for cross-strait relations to remain frosty under a second Tsai administration. President Tsai Ing-wen at her first inauguration in 2016. Her second this week will be a more subdued affair.

After two months of virus-induced delay, China will convene its largest annual political gatherings. The "two sessions" will kick off on Thursday with the Chinese People's Political Consultative Conference, followed by the National People's Congress the next day.

What's on the agenda? The government will lay out policy directions and the economic outlook, as the country grapples with challenges wrought by the coronavirus. The NPC will also deliberate the national budget and legislative bills, both newly proposed and those ripe for revision, including laws on biosecurity and animal epidemic prevention.

Who will be there? Some 5,000 lawmakers, businesspeople and government officials from across the country will descend on Beijing for the two sessions, which will last for about a week -- shorter than last year's 13-day event. 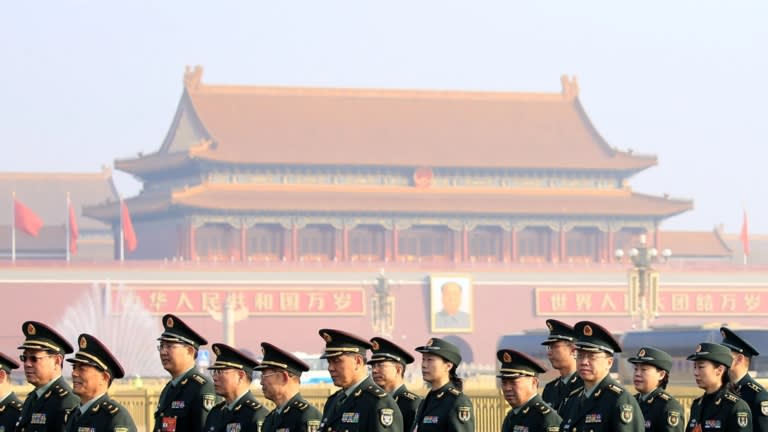 Military delegates arrive at Beijing's Great Hall of the People ahead of the National People's Congress in 2019.    © Reuters

New York-listed Alibaba Group Holding will report January-March earnings on Friday. The Chinese conglomerate, whose business spans from e-commerce to finance and technology, has observed mixed results from the coronavirus.

On one hand, demand for Alibaba's online retail, teleconference and cloud computing services has skyrocketed amid lockdown measures. On the other hand, Alibaba's ability to capture that demand may have been curtailed by delivery workers and engineers stranded at home for weeks.

Pinduoduo, which trails Alibaba and JD.com, will also report earnings on Friday. The Nasdaq-listed company's revenue growth has missed Wall Street estimates for two quarters in a row.

Hong Kong Convention and Exhibition Centre is scheduled to host its first event, a wedding fair, since the onset of the coronavirus crisis in late January. The city, however, reported a handful of new COVID-19 cases after three weeks of no infections, following the relaxation of social distancing measures. A spokesman for HKCEC said the event could be rescheduled "depending on government regulations."

Mainly known as a camera and medical equipment maker, Fujifilm Holdings' reputation as a pharmaceutical company has risen with the potential of its antiviral drug Avigan as a coronavirus treatment. Investors will be watching for updates on the drug's production and a financial windfall as the Japanese government boosts its stockpile of Avigan and fulfills supply requests from other countries.