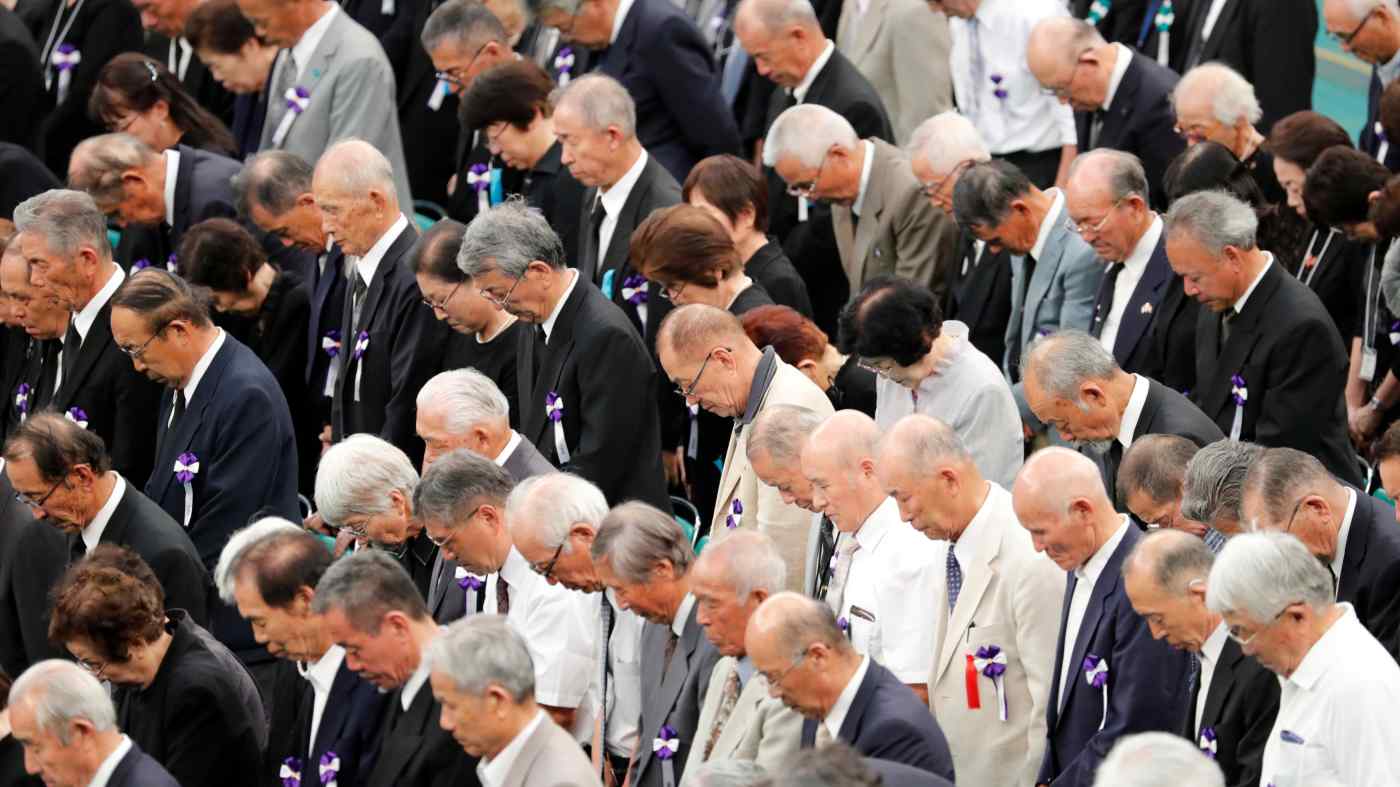 This week marks the 75th anniversary of the end of World War II. With tensions high between Japan and South Korea, there is speculation over whether Japanese Prime Minister Shinzo Abe will mark the anniversary by paying a visit to the controversial Yasukuni Shrine in Tokyo.

Earnings results are expected this week from some of Asia's biggest tech and telecommunications companies, including SoftBank Group, Tencent and Baidu. In Hong Kong, struggling Cathay Pacific Airways is expected to report a 48% drop in revenue for the first six months.

Indonesian President Joko "Jokowi" Widodo will give his annual state of the union speech as the country celebrates its 75th anniversary. His government will also set out its budget plans for next year, which should provide a glimpse of how Widodo expects to boost the slumping economy.

China gives its monthly readings on consumer and producer prices. Analysts expect consumer inflation to have picked up in July as widespread flooding affected food supplies. While producer prices continue to weaken, the wholesale index probably fell less in July due to higher commodity prices.

Singapore and Malaysia have set up special schemes to allow some residents and business travelers to apply to cross the border, with applications for the travels starting Monday.

Why it matters: The countries are uniquely interdependent. About 300,000 Malaysians were commuting to the city-state every day until the border was closed in March. Under the new arrangement, these workers will be able to start entering Singapore on Aug. 17 as the countries take a key step toward reviving their ailing economies. Short-term business trips of up to 14 days also will be allowed.

Members of the National People's Congress Standing Committee are expected to reach decisions regarding a potential vacuum period for Hong Kong now that the city's Legislative Council election has been postponed a year. It remains to be seen whether sitting pro-democracy lawmakers who have been disqualified from the next election will be allowed to return to the council. The four-day meeting ends on Tuesday.

Singapore releases its gross domestic product for the April-June quarter. Preliminary figures showed a 12.6% contraction from a year earlier, indicating the city had entered into a technical recession for the first time since the global financial crisis. The focus will be on whether the government will change its official full-year GDP projection, from a range of -4% to -7%.

SoftBank Group is expected to rebound from its worst-ever quarterly loss when it reports April-June results. The partial sale of its stake in U.S. carrier T-Mobile -- which SoftBank has said generated a profit of 600 billion yen ($5.6 billion) -- should help. Analysts will also be listening for clues on founder and Chairman Masayoshi Son's plans to sell Arm, amid reports that the U.K. chip designer has drawn interest from Nvidia as well as key Apple suppliers.

Elsewhere in Japan, telecommunications group NTT Group and Rakuten, the e-commerce company that launched its own mobile network this year, will also report earnings.

Why it matters: 5G investments. Despite the hype created by the government and surrounding industries, including equipment makers and application providers, China's carriers have been cautious on splashing out cash for 5G infrastructure as returns on those investments remain unclear.

Cathay Pacific Airways' official results come after earlier warnings that it would post a net loss of 9.9 billion Hong Kong dollars ($1.28 billion) and a 48.2% drop in revenue to HK$27.7 billion for the first six months.

Management should provide an update on the health of the battered airline, which has been operating on a "skeleton schedule" for months. The carrier may shed some light on a restructuring plan, which management has pledged to recommend to the board by the end of the year. Swire Pacific, its top shareholder, announces interim results the following day.

A European Commission decision to strip Cambodia of some trade privileges comes into effect, dealing another blow to the country's garment industry. The move marks the implementation of a punitive decision made by Brussels in February to partially suspend Cambodia's participation in its Everything But Arms scheme over human rights violations.

Cambodia thus loses duty-free access to the European Union for 40 products, equal to about 20% of the country's exports to the bloc, or some 1.1 billion euros ($1.19 billion). Tariffs on those items will revert to normal rates. Meanwhile, Prime Minister Hun Sen is expected to visit Beijing to sign his country's first bilateral free trade agreement with China. The agreement, which has not been fully released, is weighted toward agricultural exports.

The U.S. government's 90-day extension of Huawei's temporary license expires on Thursday. The license grants American companies, especially small carriers operating in rural areas, to temporarily continue doing business with Huawei. If these carriers are barred from using Huawei equipment they would face a costly and time-consuming process of replacing the Chinese company's products.

State of play: The U.S. government has released an interim rule for a ban on federal purchases of telecommunications equipment and video surveillance camera systems from five Chinese companies, including Huawei, ZTE and Hikvision, starting on Thursday. The rule cites security concerns in banning federal agencies and their contractors from using products made by these companies. Hikvision, the world's biggest surveillance camera maker, has also been placed on Washington's Entity List, which limits its access to American technology.

With its U.S. owned rivals Sands China, MGM China and Wynn Macau already posting losses, the outlook is grim for the half-year results of Macao casino operator Galaxy Entertainment. While casinos stayed open in Macao for all but two weeks of the first half the year, gamblers have been scarce. Costs, though, have stayed high amid government pressure to sustain payrolls.

Investors will be waiting to hear management's view on how much the loosening of COVID-19 border controls with mainland China that started recently may help turn things around in the second half.

Fujifilm Holdings, the camera and medical equipment maker, announces results for the April-June quarter. Its stock price has staggered in recent weeks after a clinical trial of its antiviral drug Avigan, touted by Japanese Prime Minister Shinzo Abe as a potential COVID-19 treatment, ended without conclusive results.

Companies from the greater China region with a secondary listing in the city or with shares carrying different voting rights are eligible to be included in the index under new rules adopted by the Hang Seng Indexes Co., a unit of Hang Seng Bank in May. The changes will reduce the financial sector domination of the 50-year-old benchmark index and increase the representation of technology stocks.

Economists are predicting a double-digit contraction in Malaysia due to a two-month lockdown that slowed manufacturing, investment and trade in the second quarter.

Jokowi state of the union

Indonesian President Joko "Jokowi" Widodo gives his annual state of the union speech to mark the country's 75th year of independence and reveal the country's state budget plans for next year. With COVID-19 still wreaking havoc in the archipelago, the president is likely to use the occasion to outline measures to save the flagging economy.

South Korea observes Japanese Military "Comfort Women" Victims Memorial Day. The government in 2018 made Aug. 14 a national day of remembrance for Kim Hak-sun, who came forward on the same day in 1991 to speak out about her suffering as a comfort woman during World War II. The ceremony comes amid tensions between Seoul and Tokyo over the liquidation of Nippon Steel's assets in South Korea.

Washington and Beijing are set to have a virtual meeting to review progress on their "phase one" trade deal. U.S. trade chief Robert Lighthizer as recently as June said China was on track to meet its purchase promises for the year, signaling Washington's willingness to uphold the agreement despite President Donald Trump's threat to scrap it.

There have been multiple escalations of Sino-American tensions since then, including last week when Trump signed an executive order targeting TikTok and Tencent. The meeting, a semiannual review of phase one progress, could offer both sides an occasion to discuss these issues.