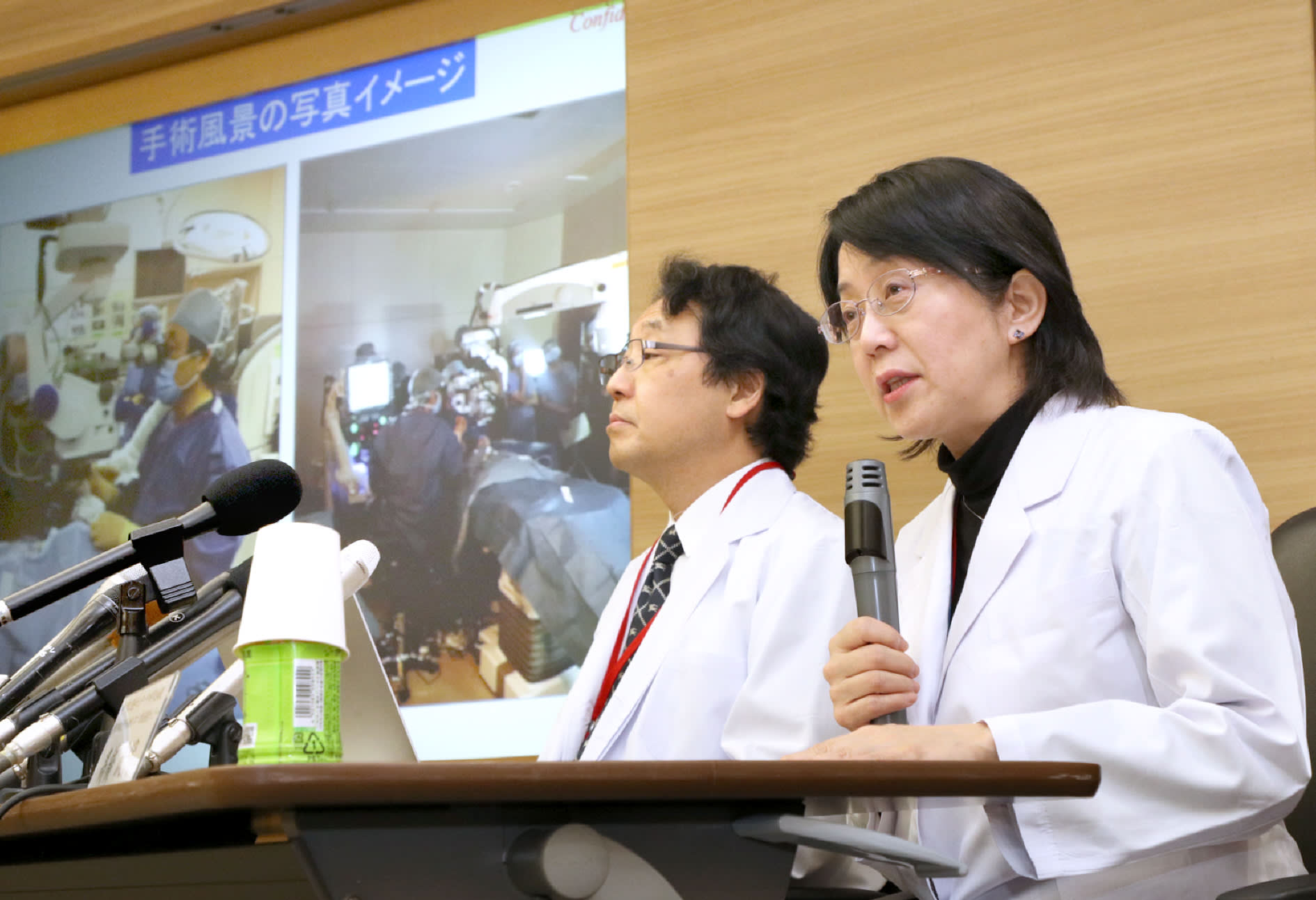 OSAKA -- Researchers transplanted induced pluripotent stem cells derived from donors into a patient in Kobe Tuesday, in the first such trial using cells not from the patient -- an advance with hopeful implications for Japanese regenerative medicine.

Research institute Riken worked with the Kobe City Medical Center General Hospital, as well as Kyoto University and other partners, to make the procedure a reality.

The patient, a Hyogo Prefecture man in his 60s, suffered from age-related macular degeneration, an intractable eye disease that can cause blindness. He received in his right eye an injection of a solution containing 250,000 retinal cells grown from iPS cells. The procedure began before 2 p.m. at the Kobe hospital and lasted about an hour.

The operation went smoothly, Yasuo Kurimoto, director of ophthalmology at the hospital, told reporters. Masayo Takahashi, head of the project at Riken, said the researchers had reached about the halfway point in their pursuit of the practical adoption of iPS cells.

The institutions hope to perform the transplants for five patients in all to determine the safety of the process. The transplants are not expected to improve their eyesight much, but should eliminate the need to take medicine regularly and keep vision from deteriorating further.

Riken performed the world's first such procedure in 2014, but used iPS cells derived from the patient. The process drew notice for its cost and lengthiness, taking roughly 100 million yen ($905,600 at current rates) including inspections to make sure the cells would not become cancerous, and around 10 months.

In Tuesday's procedure, using stock iPS cells carefully tested for safety, Riken and its partners expect costs of just several million yen -- less than a tenth those of the first trial. The patient also reportedly waited just about six weeks for the procedure after agreeing to it.

Researchers seek to use iPS cells to treat conditions including spinal cord injuries as well. Donor iPS cells may make this possible for such injuries and other urgent operations for which gathering cells from patients would take too long.

Riken and the other institutions intend to carefully observe the new patient to ensure the procedure's long-term safety. It is possible the patient's body could reject the transplanted cells. The results should be announced two or three years down the road, as it will take time to see the case through fully, said Takahashi.

Using donor cells requires thorough oversight. Kyoto University stopped supplying iPS cells grown from umbilical cord blood to outside institutions in January due to the possibility that an incorrect reagent was used in the cells' creation. The university then announced a research partnership with the biomedical company Takara Bio dedicated to ensuring the quality of iPS cells.