TOKYO -- Researchers in Japan are taking bioscience to new limits, creating artificial organisms that can generate a range of useful substances more efficiently and with greater functions. Such organisms could bring revolutionary changes to manufacturing, medicine and other industries.

A group of scientists led by Seiichi Taguchi, a professor of biotechnology at Hokkaido University, has successfully created a plant that can turn carbon dioxide, a greenhouse gas, into plastic. The team worked with Toyota Motor and other organizations on the project. 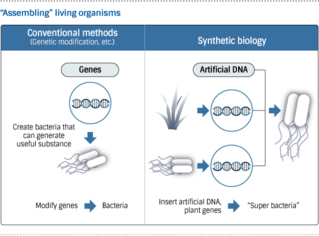 In their research, the scientists found a new way to connect lactic acids to produce polylactic acid, a plastic substance. Previously, they said, the only way of connecting lactic acids was through chemical synthesis. The team created an artificial enzyme to do the job and inserted a gene carrying the information needed to create that enzyme into tobacco cells.

If that gene functions properly, the enzyme is produced inside the plant's cells and used to turn CO2, absorbed through photosynthesis, into polylactic acids. This is a step toward realizing what the researchers describe as "a plan to harvest plastics from farm fields."

There are limits to how much a plant's performance can be enhanced, even with genetically engineered specimens. To create the industrial products they desire, companies and researchers are turning to synthetic biology for ways to "assemble" new living organisms, much like manufacturers combine parts to create new products.

Genetic engineering is progressing by leaps and bounds. With advances in the decoding of organisms' genomes, scientists have been able to shed greater light on how individual genes actually work. There is hope that someday they will be able to artificially synthesize living organisms by replicating genetic structures. Currently, researchers are working on projects aimed at using synthetic biology techniques to produce biofuels and potent drugs more easily and in bulk.

Tokyo University of Agriculture and Technology, for instance, is trying to make bacteria coliform that will produce an insecticidal component that is effective only against cockroaches. Researchers at the university are trying to reconfigure certain of the bacteria's genes to make the organism attractive -- and lethal -- to cockroaches.

A research group at Nagoya-based Meijo University, meanwhile, has succeeded in inserting a plant-derived gene into cyanobacteria. This added gene gives the bacteria the ability to create ethylene from CO2.

And national research institution Riken has created a DNA structure that does not naturally occur on earth. All living things on our planet have four DNA bases in their genes. But Riken scientists have added two more base using artificial substances. This human-made DNA has replicated itself properly and works just like ordinary DNA, they said.

They believe the artificial DNA could be used to induce totally new biological reactions and may aid in the development of new drugs and other products. "We have acquired the technology for creating substances and living organisms that do not exist on earth," said Ichiro Hirao, team leader of the synthetic molecular biology team at Riken.

Synthetic biology is not entirely different from more conventional biotechnology, as both involve genetic modification, synthesizing genetic substances and other gene technologies. But while conventional technologies can be compared to tweaking a product, experts say, synthetic biology is more akin to completely overhauling it or designing and producing a new one from scratch.

As such, one of the aims of synthetic biology is to create microorganisms and cells through the use of artificial genes and other substances. Scientists expect that synthetic biology will be able to help produce useful proteins far more efficiently or even bring about new functions. By using microorganisms, it is also expected to be a powerful research tool in the quest to unravel the mysteries of life.

But like any other innovative technology, there is the fear that synthetic biology could also be used for military purposes and terrorist attacks. For example, if a highly infectious and toxic artificial pathogen is developed, it could fall into the wrong hands.

At international academic conferences and research meetings, experts have already started discussing biosecurity policies and measures aimed at preventing such scenarios. The challenges unique to synthetic biology still need to be examined according to current laws and codes of ethics.

Last October, countries attending the 12th meeting of the United Nations' Conference of the Parties to the Convention on Biological Diversity agreed to assess the risks this technology poses to ecosystems.