OSAKA -- Using iPS cells to discover drugs faster and more reliably has become a practical reality as a Kyoto University team prepares the world's first clinical trials of a medicine so developed, marking a leap in medical science.

Professor Junya Toguchida has found a candidate drug for treating fibrodysplasia ossificans progressiva, or FOP -- a condition in which bone can grow in muscle tissue and elsewhere -- using induced pluripotent stem cells, the university's Center for iPS Cell Research and Application said Tuesday. Clinical trials are to start in September at the earliest. There is no effective remedy yet for the rare condition, from which around 80 Japanese are said to suffer.

A Kyoto University Hospital review committee has given the go-ahead for the trial, and the university has given notice to the Pharmaceuticals and Medical Devices Agency. Once all the necessary approvals are granted, safety and effectiveness trials can commence on a total of 20 test patients, aged 6 to 59. Plans call for the trials to be conducted at the University of Tokyo, Nagoya University and Kyushu University as well.

An iPS cell can be turned into any type of cell in the body. Shinya Yamanaka, director of Kyoto University's iPS cell research body, first induced them from mice in 2006, and from humans the following year. Injecting genes into, for instance, skin or blood cells rewinds them to a state akin to before they were differentiated into particular types, forming a sort of blank slate for creating human organ or tissue cells.

Regenerative medicine and drug discovery are the two main areas of application for these cells. There have already been a number of advances in tests of regenerative medicine, which can help restore bodies afflicted by illness or injury. "I hope drug discovery research will become active, leading to the development of new treatment methods for a range of conditions," Yamanaka said Tuesday. 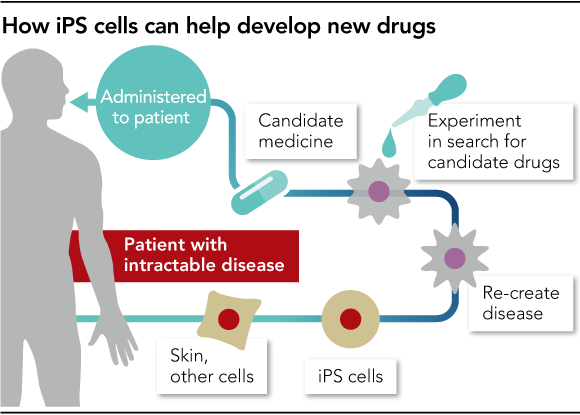 In the FOP case, the research team made use of the special characteristics of iPS cells to accurately reproduce the diseased state in cells derived from patients. They tested around 7,000 potential treatments, efficiently narrowing them down to find one that checked the illness's progression.

Drug discovery typically involves reproducing human diseases in mice or other animals, using them to study how the disease works or what treatments might help. But treatments that may work for mice frequently do not for humans, causing development to stall.

Using iPS cells, however, researchers can observe the effects of a disease on patients' cells in a test tube. That drastically speeds up the narrowing-down process, and is expected to increase the success rate of drug discovery. Toguchida, who is behind the FOP clinical trials, said in his case, a candidate drug was found unexpectedly quickly.

That candidate was rapamycin, an immunosuppressant used in organ transplants. It was thanks to iPS cells' speeding of the screening process that an existing drug emerged as an option. Using an established medicine makes the path to implementation easier.

A number of drugmakers are beginning to use iPS cells in drug discovery, though most are in the early research stages. One early adopter was Sumitomo Dainippon Pharma, which has participated in joint research with Kyoto University for several years and assisted in screening promising candidate drugs for Toguchida's breakthrough finding.

Takeda Pharmaceutical in 2015 entered a decade-long joint research pact with Kyoto University, providing 20 billion yen ($181 million) in funding to study the application of iPS cells in treating six fields of disease, including cancer. Pharma giants around the world are hurrying to incorporate the cells in drug discovery as well.

The use of iPS cells to study the side effects of candidate drugs and reduce the risk of failing clinical trials is also advancing. Takeda says it has successfully done so for drugs, including some for the heart, and Eisai is hard at work on research in the same vein.

The iPS cell supply business is also expanding. Takara Bio is selling liver cells made from iPS cells, and Reprocell and Fujifilm Holdings are getting into the game as well. "Orders for iPS cells made from patients' cells are coming in from companies at home and abroad," said a Reprocell official.