Nation trails only US in annual rankings TOKYO -- Japan is a clear leader in Asia when it comes to innovative organizations, a report by the research company Clarivate Analytics has found.

The 2016 analysis focused on organizations such as companies, universities and governmental institutes that patented 100 or more new inventions in the past five years. It then came up with a list of 100 innovative companies around the globe, based on factors like the number of patents, the success rate of patent applications and influence on other innovations.

Japan had 34 organizations in the top 100, including companies such as Toyota Motor, Panasonic and Sony. It was second only to the U.S., which had 39. South Korea was fifth in the country rankings, with three companies -- LG Electronics, LSIS and Samsung Electronics -- making the list. One Taiwanese organization, MediaTek, was ranked. 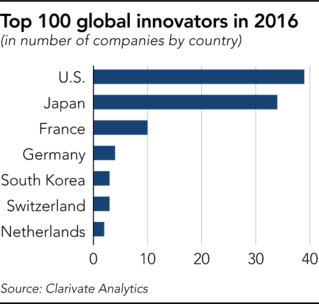 China was represented by the smartphone maker Huawei. No Chinese organizations had made the list the previous year. In 2015, the country became the first to file 1 million patent applications in a single year, according to the World Intellectual Property Organization. Clarivate said that while the country had the greatest volume of patent applications, only 6% of them actually led to global grants.

"Just two countries account for 73 percent of the list -- Japan and the US -- making them the major innovation hubs of the world," the report noted.

France was third in 2016 with 10 organizations making the list. Germany, usually seen as an innovation force, came in fourth with only four organizations.

The 100 organizations on the list generated $4 trillion in combined revenue in 2015, supported by a huge outlay on research and development, which totaled $227 billion.

"Against a backdrop of increasing volume of inventions being patented over the last five years globally, the trend for many of the Top 100 Global Innovators organizations is to file fewer inventions this year," the report said. "With a focus on more innovation with greater impact, driving higher citation counts, companies are beginning to realize that it's not just about having strength in numbers, but investing in the tools and processes that make those filings stand on their own."