TOKYO -- Japan's international status in science and technology is sinking at an alarming pace, despite a bevy of Nobel Prizes awarded to the country's scientists in recent years, and it is swiftly being eclipsed by China.

Experts point to a growing amount of data indicating declining levels of research in science and technology in Japan. Some say the country's researchers are finding it increasingly difficult to pursue long-term projects due to strong pressure to produce tangible results quickly.

Meanwhile, China keeps ramping up efforts to take on challenges in a wide range of fields.

China is the most prominent emerging power in the world of science and technology, as clearly seen in the country's rise in the latest list of the fastest supercomputers in the world.

The Top500, a ranking of the most powerful supercomputers, was published in November at an international conference held in the American state of Utah. Chinese supercomputers have been topping the list, which is updated twice a year, since 2013. In 2016, Chinese systems have taken both the top and second spots. China accounted for 34.2% of the machines on the latest list, a figure on a par with the U.S. share.

Supercomputers are essential for performing highly complex computations in cutting-edge research. Thus, a country's supercomputing power is seen as an indicator of its level of science and technology.

Supercomputing technology has long been ruled by major industrial nations, with the U.S. being the perennial dominant power. Japan also once took the top position.

Motoaki Saito, president of supercomputer startup Pezy Computing, likens the differences between Chinese supercomputers and machines developed by the U.S. and Japan to those between Formula One racing cars and high-end vehicles for consumers. Pezy Computing was involved in the development of the Shoubu supercomputer, which won the top place in the Green500 supercomputer ranking, the title for the world's most energy-efficient supercomputer.

In terms of simple computing power and the number of supercomputers installed, Japan will remain behind China, Saito predicts.

China places high priority on such policy challenges as saving energy and resources, continued economic development and improvement in public health. It has also been promoting research for boosting its military power and national prestige. To accomplish these goals, the country is training a huge number of software engineers who can operate supercomputers.

Beijing is spending enormous sums for tackling these issues, and it has been making steady progress.

But Japan's declining stature in science and technology cannot be explained by China's rise alone.

Japan is also falling behind other industrial nations as well.

China produces 15.7% of the world's top 1% most-cited research papers, the second-largest share following the U.S., which accounts for 50.3%. China has climbed the ranks from 10th position a decade ago, when its share was 3.4%. 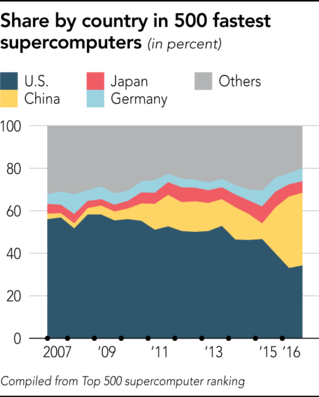 European countries like U.K., Germany and France have also been overtaken by China, but their shares have still increased.

The number of Japanese papers on the list has increased from 491 to 693, but the rest of the world has been more productive.

Masatsura Igami, director at the national institute's Research Unit for Science and Technology Analysis and Indicators, notes that a growing number of papers published in the world are products of cross-border cooperation among researchers or efforts to explore new research areas. "Japan has been failing to ride that tide."

European countries usually seek international cooperation when they pursue research projects that require more resources or capabilities than they have. China is also involved in many joint research projects with the U.S.

In contrast, Japan tends to go it alone. Also, the government's research budget focuses on projects that are in line with its growth strategy, which puts priority on short-term results that benefit the Japanese economy. The lack of international cooperation is taking a toll on the country's competitiveness.

A decade ago, some experts claimed that Japan still held an advantage over China in terms of the quality of papers. But the latest data concerning the number of papers published in major academic journals leaves little doubt that China has advanced rapidly during the period, while Japan has been mired in stagnation.

China is also quickly gaining ground in the most advanced areas of research.

In August, China launched the world's first quantum communications satellite, which is used for experiments for developing technology based on quantum cryptography to create communications networks impervious to hacking.

Europe has been working on such experiments in efforts led by the University of Vienna.

But China became the first country to launch a satellite for research in quantum communications in a program led by Jian-Wei Pan, a professor at the University of Science and Technology of China who studied quantum physics and received a doctorate from the University of Vienna.

China has rocketed to the top of the line in this field, said Masahide Sasaki, a distinguished researcher at Japan's National Institute of Information and Communications Technology and an expert in quantum cryptography.

China is currently trying to build one of the world's largest communications networks based on quantum cryptography.

Sasaki warns that China is likely to take the leading role in the development of technological standards for quantum communications.

Japan is no longer Asia's leading science and technology power. It's China.