TOKYO -- Genetic testing promises to tell us what inherited diseases lurk in our future. Even better, there is no need for a trip to the hospital, as many tests are now being offered through the Internet.

But there are drawbacks: The tests often rely on incomplete scientific research and results can vary from provider to provider.

The human body is made of roughly 60 trillion cells, each one carrying a copy of the same DNA. Genes, which encode around 100,000 different life-sustaining proteins, are scattered in this DNA. In case of human beings, these genes constitute approximately 2% of the whole DNA sequence, or genome. The human genome is made up of around three billion pairs of chemical bases. 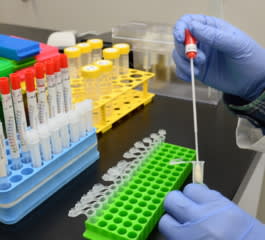 Genesis Healthcare in Tokyo's Shibuya Ward offers genetic testing services. Wataru Tsutae, vice president of Genesis Institute for Genetic Research, explained the procedure: Technicians at the lab analyze genes by dipping sampled buccal cell on the tip of a cotton swab into a special chemical and then extract the DNA from the cell after heating the specimen and putting the DNA into a reagent. About an hour later, the results are shown on a computer screen.

There are around 7 billion human beings on the planet and every one of them, irrespective race, gender and age, has roughly 20,000 genes. Because the sequence of bases is slightly different from person to person, no two people have exactly the same genes.

That difference is only roughly 0.1% of the sequence, and only a part of the difference is enough to reveal a person's predispositions for different diseases.

For example, there are three genes that are strongly linked to obesity. A difference in just one base in each gene is enough to change how efficiently a person uses energy.

Those who have genes that dictate more efficient energy consumption can maintain physical activity on a smaller amount of calories. The bad news is that they are more likely to get fat in modern society, where high-calorie foods are readily available.

However, DNA tests are far from infallible. Even if a test result tells you that you have threefold greater risk of developing a certain disease, that is not necessarily cause to despair. The tests are based on statistical data about the risk of developing that disease among a group of people who have the same gene as yours. Because that information is not always sufficient, DNA tests cannot say for sure that someone will be affected by the disease.

Moreover, the onset mechanism of many diseases is often too complicated to explain solely through the absence or presence of certain genes.

At least 60 types of genes are believed to be involved in the onset of diabetes, which is typically a lifestyle-related disease. Coupled with many factors such as smoking, diet, stress and exercise, diabetes develop. However, much remains unknown about exactly how the condition develops.

Akihiro Sakurai, professor of genetic medicine at Sapporo Medical University, says that a DNA test only indicates genetic predispositions based on the latest research.

Test results can also vary depending on service providers. In one test, a person may have a risk of developing dementia four times larger than the general population, while in another test, the same person might have the same risk as others. This is because testers use different numbers and types of genes for analysis.

Informed use of genetic tests could motivate people to take preventive measures against diseases. However, it may also cause confusion if people take the test without fully understanding its limitations. Accordingly, some authorities have started regulating the service.

In November 2013, the U.S. Food and Drug Administration issued a warning letter to 23andMe, based in Mountain View, California, to suspend marketing of a saliva collection kit and personal genome service. The agency of the U.S. Department of Health and Human Service responsible for protecting and promoting public health was concerned about the consequences of inaccurate results from the device. Japan's Ministry of Economy, Trade and Industry also started drawing up rules on genetic test in cooperation with experts.