TOKYO -- Japan Aviation Electronics Industry has developed a thin connector with improved elasticity for wearable devices that are attached to clothing.

The technology is essential for development of new devices in order to eliminate the discomfort during strenuous activities caused by devices attached directly to the body, like the wrist, waist and other parts.

Planned applications for the connector include the medical and sports fields.

The connector consists of two pieces of highly elastic rubber materials that are bonded together to connect a wearable's electronics to a fastener. Measuring about 2 mm thick, the product feels as if part of the body even when attached to clothing, according to the company.

The fastener is designed for easy removal of devices from clothing before washing.

To produce it, metallic film is placed over fine bumps on the rubber surfaces. The bumps are then meshed together to form an electrical circuit that activates the device.

The rubber is greaseproof and waterproof to protect electronic components from sweat and rain.

The connector allows batteries, sensors and communication components to be attached to a device that is affixed to clothing. This means that devices that measure biometrics and emit radio waves for communication can be fitted on clothing, eliminating body discomfort.

Among the envisioned applications is a sensor for monitoring elderly at care facilities or other locations. 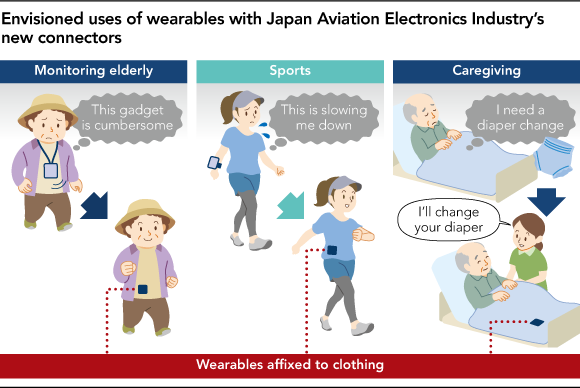 The new connector may lead to novel wearables.

The growing popularity of the internet of things has expedited development of wearables, such as those that send biometric data to smartphones and other devices. Although development has been concentrated on eyeglass- and wristwatch-type wearables, including smartwatches, demand for devices that do not come into direct contact with the body has been high, especially in the caregiving, medical and sports fields.

The company will team with a developer of wearable devices for clothing to commercialize the connectors.

Shinichiro Nakajima, head of the company's Product Development Center, expressed his hope for more applications of the connectors. The new connectors will "allow devices to be attached to areas not attachable before," Nakajima said.