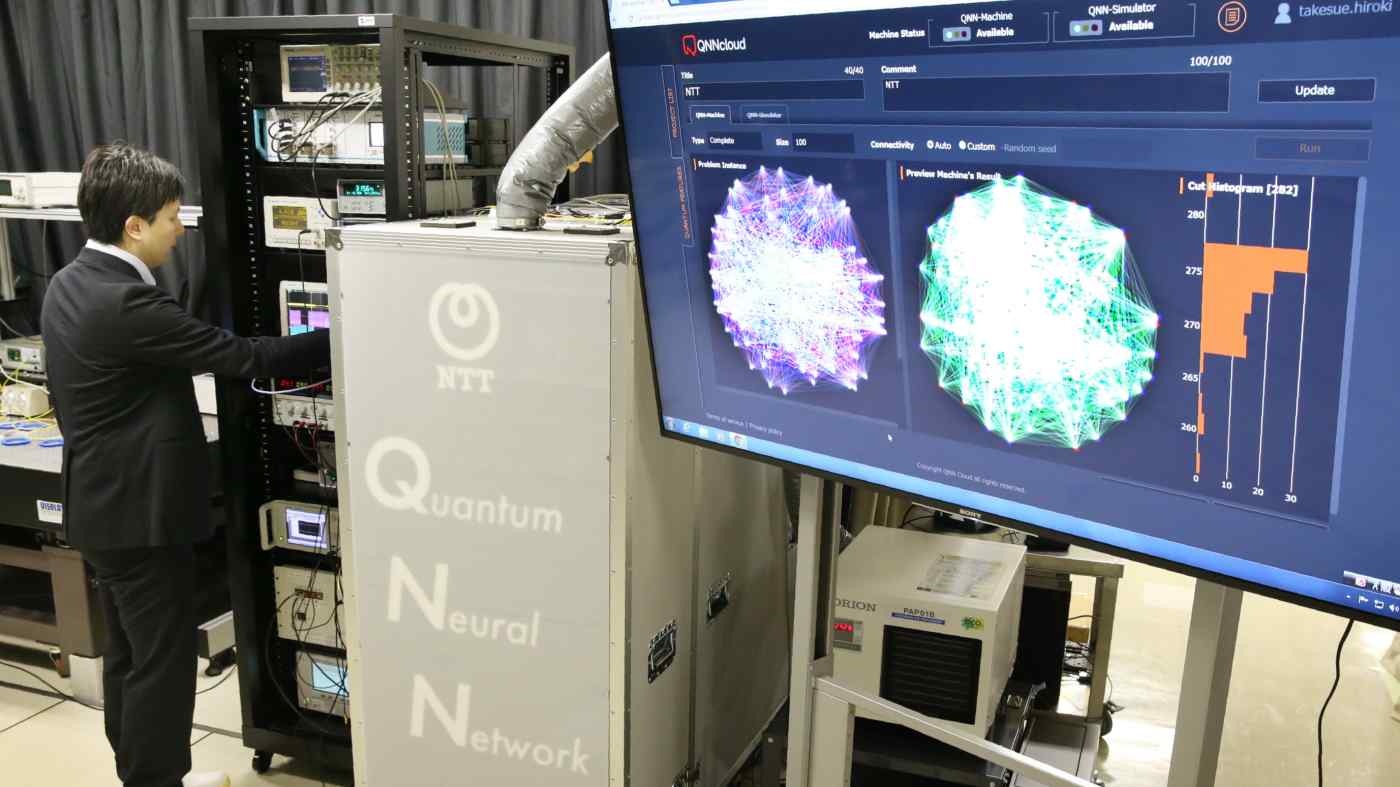 NTT's quantum computer is said to use about as much power as a household appliance.
November 21, 2017 04:03 JST | Japan
CopyCopied

TOKYO -- Nippon Telegraph and Telephone will open up a prototype quantum computing system for public use over the internet for free starting Nov. 27, the company said Monday, as Japan joins China and the U.S. in the race to develop the world's most advanced computers.

Quantum computers take advantage of the strange physical phenomena occurring at extremely small scales. The international rush to develop the technology comes as limits emerge to speeding up and reducing the power consumption of existing semiconductor-based computers. Quantum tech offers advantages in both areas.

Some problems that would take today's supercomputers thousands of years to solve could be dispatched by quantum computers in minutes. Such ultrafast processing would help unlock the potential of artificial intelligence. Canadian startup D-Wave Systems released the first commercially available quantum computing system in 2011.

Tokyo-based NTT has worked on a Japanese state-sponsored research project in quantum computing with the National Institute of Informatics and others. It has taken a different technical approach from Google and other developers, producing a device that exploits the properties of light. The quantum neural network prototype has been deemed ready to open to the public after becoming capable of operating stably around the clock at room temperature. The aim is to test a range of uses and have this tie into developing software.

In cases where a supercomputer would consume 10,000kW of power, NTT's prototype would use just 1kW -- closer to a household appliance.

The U.S. spends around $200 million annually on researching and developing quantum computers, positioning them as infrastructure for a new industrial revolution. China has made the field a major point in its five-year plan for science and innovation.

Google is conducting quantum research with physicist John Martinis of the University of California, Santa Barbara, in hopes of boosting AI processing speeds. While NTT's prototype excels at such specific tasks as finding the shortest path between nodes of a graph, Google seeks a computer with more general problem-solving skills. This raises the hurdles to success but could open up a wider range of uses.

Japan, which has accumulated much basic research in the field but been slow to bring it to fruition, has earmarked about 30 billion yen ($267 million) for quantum computing over a decade beginning in fiscal 2018. Hitachi is also researching quantum computing in partnership with the University of Cambridge.

For now, the problems that quantum computers can solve are limited, and unique software is required. They can destabilize easily, and miniaturization to the level of present-day computers will likely prove difficult without further breakthroughs.