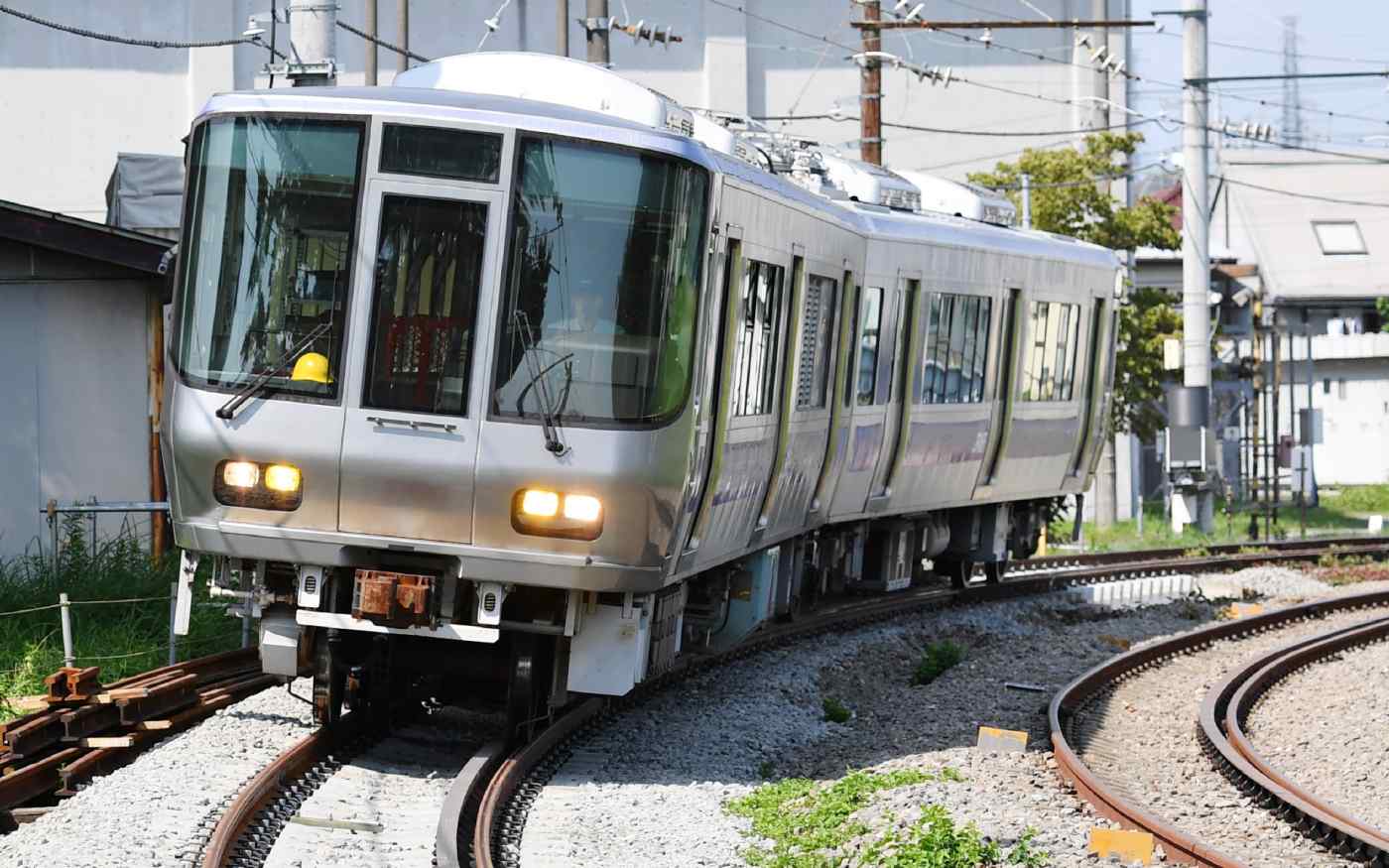 TOKYO -- Buying a house right next to a rail line might not be such a bad idea in the near future. The latest research and development points to a future of trains without overhead power cables that emit nothing more noxious than water.

The R&D arm of Japan Railways group has already began test runs on trains powered by hydrogen. Like the cars that automakers are working on, the Railway Technical Research Institute, has equipped its train with fuel cells.

Often dubbed a miniature chemical factory, fuel cell systems generate electricity from a chemical reaction between hydrogen and oxygen. The magic happens in the train itself, in JR's case, via a fuel cell unit on the floor of the carriage supplied by four hydrogen tanks under the floor. 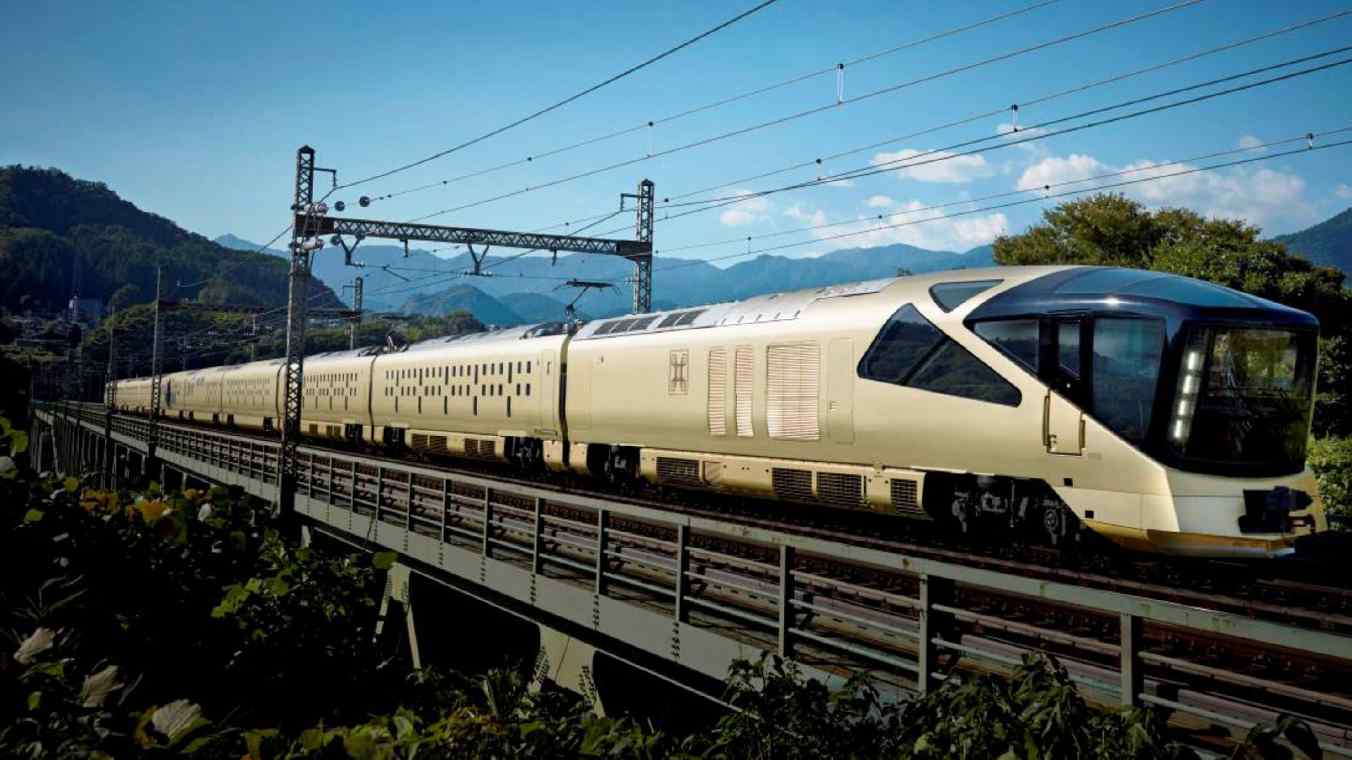 Fuel cell-powered trains, along with better signaling systems, promise smoother transport for all. Fuel cells would give each train its own power source, doing away with unsightly overhead power lines. This could slash maintenance costs and eliminate the delays they cause when they are down. More sophisticated signaling systems would let trains run closer together and allow railroad crossing gates to remain open longer, easing congestion.

Japan's railways are renowned for their on-time arrivals and efficiency, but accidents involving overhead lines do happen occasionally, inconveniencing passengers. In October, a power transmission problem on East Japan Railway's Utsunomiya Line, which runs north of Tokyo, left passengers stuck on a train for two hours.

A trial run in August for a prototype fuel cell train in Kokubunji, western Tokyo, felt like a ride on a standard electric train. The fuel cell unit in the carriage is supported by a lithium-ion battery for auxiliary power. The only by-product from the train's operation is water, making it a clean form of transportation. 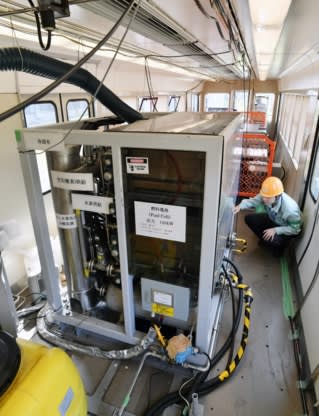 A prototype fuel cell train performs a test-run in Kokubunji, Tokyo, in August.

Overhead power lines can efficiently deliver up to 1,000 volts of electricity. But JR East has more than 4,000km of railways powered by these lines, excluding bullet train lines. Trouble anywhere along this vast network brings cars stuttering to a halt. Fuel cell trains, if they could replace conventional ones, would solve that problem once and for all, making life easier for passengers.

RTRI launched the fuel cell train project in the early 2000s. Now it is getting close to commercial use as cell manufacturing costs have fallen. "The next step is to test the train with passengers aboard," said a senior researcher at RTRI.

The first production-model fuel cell trains are expected to hit the tracks in rural areas currently served by diesel trains. Conventional electric trains are likely to remain in use in Greater Tokyo for the foreseeable future, given the size of the rail network.

Work on fuel cell trains is underway overseas as well. France's Alstom is developing the Coradia iLint, which the company says can travel 1,000km without refueling, at a top speed of 140kph.

Fuel cell trains, by easing problems with power supplies, could help cut maintenance costs, which make up 20-30% of JR East's operating expenses. Those costs will increase over time because the company's ground-based equipment has been in use for more than 60 years.

In its battle against maintenance costs, JR East has also introduced a new signaling system that eliminates the need for signals along the track.

Unveiled on Nov. 4 on JR East's Saikyo Line that links Tokyo and Saitama Prefecture to the north, the Advanced Train Administration and Communications System, or ATACS, brings some of the functions of the ground-based signaling system onto the trains themselves.

Signaling systems are used to ensure that trains do not collide or run too close together. Trains equipped with the ATACS system determine their position using wireless devices installed along the rails. A train can also communicate its location to the one ahead. A central computer server controls their movements to prevent collisions.

The new technology allows trains to operate closer to each other than the conventional system can.

JR East has about 13,000 signals in all, and the company expects the rollout of ATACS will let it cut that number and some of the equipment needed to control trains the old-fashioned way. That, in turn, will reduce the workload of those who maintain the system.

ATACS can also prevent roads from being blocked at railroad crossings for long time due to trains running in rapid succession. Conventional signaling systems lower railway crossing gates while the train is still up to 1km away. ATACS can shorten that distance by providing precise data on the train's location and distance from the next crossing. This lets it trigger the gate only when necessary.

JR East first tested ATACS on the Senseki Line in northeastern Japan in 2011. The company expects full-scale introduction of the system to reduce signaling problems in the metropolitan area, although heavy traffic means this may not immediately lead to more trains on the track.