Mitsubishi Materials, others investing in recycling to fend off rare metals shortage The gold, silver and bronze medals of the 2020 Tokyo Olympics are to be made from the country's urban mines -- made up of millions of discarded smartphones and other consumer electronics.
October 3, 2017 08:00 JST | Japan
CopyCopied

TOKYO -- Mitsubishi Materials, Dowa Holdings and others are sifting through mountains of discarded electronics and other products to recover gold, platinum, palladium and other rare metals.

Driving the recycling efforts, which have recently been increasing, is an expected shortage of the metals.

Mitsubishi is adding new domestic and overseas facilities, and plans to invest up to 12 billion yen ($107.6 million). As a result, its annual recycling capacity will rise 40% to 200,000 tons, making the company one of the world's largest processors of secondhand gold, silver, copper and other rare metals. 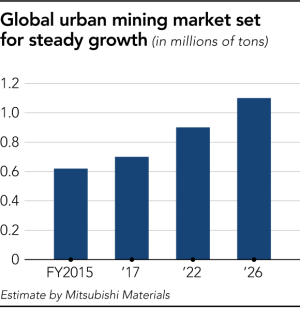 The company will add several new facilities at its Naoshima Smelter and Refinery, in Kagawa Prefecture, the company's mainstay urban mining base. New equipment will allow it to sort metals with great precision, and a preprocessing mill will let the company heat the metals and remove impurities.

The overall investment at the location is to be between 6 billion yen and 8 billion yen; the new equipment will go into operation in fiscal 2021.

In another project, Mitsubishi in fiscal 2018 is to open a facility in the Netherlands to evaluate the quality of metals in used computers, smartphones and other electronic devices. It will be the company's first overseas base for this purpose.

The overall investment, including the establishment last year of a subsidiary, will reach about 4 billion yen. The evaluation center will significantly cut the amount of time spent collecting rare metal-containing devices in Europe.

With the new investments, Mitsubishi will increase its rare metals recycling capacity from 140,000 tons a year today to 200,000 tons in fiscal 2021, making it one of the world's largest collectors of secondhand rare metals.

The company will also start collecting rare metals from lithium-ion car batteries. These power packs contain nickel and cobalt -- rare metals that are only produced in relatively few spots around the world. Mitsubishi has been testing ways to safely transport and disassemble Li-ion batteries, which can catch fire under certain conditions. It plans to collect batteries from several makes and models of electric cars, then mine rare metals from them.

Urban mines are becoming more attractive to major nonferrous producers because they contain larger amounts of rare metals than conventional mines and because conventional mining is growing more costly.

Organizers of the 2020 Tokyo Olympics are hoping to source the gold, silver and bronze needed to make medals for the games by tapping into the country's urban mines.

Dowa Holdings is another company joining the rush. It is increasing its ability to collect and recycle catalyzers, used to clean auto emissions from gasoline-engine vehicles. Catalyzers contain precious metals such as platinum, palladium and rhodium. The company plans to set up an electric furnace that can melt catalyzers -- a step Dowa expects to help it increase the urban mine's production by 40% by 2020.

And thanks to tighter emissions controls in Europe and the U.S., more catalyzers are expected to become available to Dowa. Another urban miner, JX Nippon Mining & Metals, has collection bases in the U.S. and Taiwan, where a lot of semiconductors are made.

Meanwhile, Sumitomo Metal Mining, a major provider of cathode materials for Li-ion batteries, is set to begin collecting used electric car batteries from producers. The company plans to remove copper and nickel from the batteries, then reuse the metals in its cathode materials.

Around the world, 700,000 tons of recycled rare metals are traded annually. The figure is projected to reach 1.1 million tons in fiscal 2026. Given the trend, Mitsubishi Materials is thinking about raising its processing capacity to 230,000 tons, perhaps in fiscal 2025.