Analysis of an electrophoresis image by LPixel founder Yuki Shimahara regarding STAP cells discovered by a team led by scientist Haruko Obokata. Image 1 is the original, while images 4 through 6 show cut-and-pasted parts highlighted in the red rectangles.

Yuki Shimahara, 28, is the founder and chief executive of LPixel, a start-up that originated at the University of Tokyo. In February 2014, Shimahara was busy creating a company for developing image analyzing software for use at university laboratories and at companies. This also happened to be when science research in Japan was reaching a crisis point due to a string of wrongdoings. The most notable incident was the exposure around that time of fabricated results in research papers by Japanese scientist Haruko Obokata.

Shimahara decided to try out his technology on images published in Obokata's papers, which were about the stimulus-triggered acquisition of pluripotency (STAP) cells. He found that one image showing DNA analysis had been partially replaced with a photo from a different experiment.

These findings concerned Shimahara. He worried that the world of science could become corrupted if nothing were done, and so he began developing a service to detect alterations made to images. 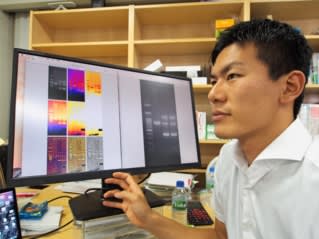 Initially, Shimahara considered charging for the service. But this April, just after establishing the company, he started offering the service for free in the hopes that it could serve as a deterrent against research fraud.

By word of mouth, the service quickly spread to universities and research institutions around the world, and is now used as often as 1,000 times a day.

LPixel specializes in images related to biology and chemistry. It uses AI to find editing marks that are hard to spot through conventional image detection software. The more the software is used, the more data is accumulated for improving accuracy. The company offers an upgraded service for a charge.

The global data volume of research papers has grown by 30 to 40 times in the past decade. Of this data, 80% is not in text form, and therefore not as easy to search and cross-examine online. This other data is mostly in the form of images, such as from high-performance microscopes, magnetic resonance imaging devices and computerized tomography.

Roughly 10% to 20% of all research papers currently being published are said have fraudulent information. Shimahara worries about the potential money and time that could be wasted if projects pursue wrong directions because of such incorrect research results.

Though LPixel has grabbed attention with its software for detecting fraudulent research papers, more than 90% of its sales actually come from producing image analysis software for laboratories.

The use of image processing technology makes it easier to detect the causes of diseases that would otherwise be missed by the human eye. For example, cancer that originates in the liver differs from cancer that has spread to the liver from another organ, and each requires different forms of treatment.

When Shimahara was studying at a laboratory of the University of Tokyo, he developed -- together with the National Cancer Center and the Tokyo University of Science -- AI software that can use images to detect metastatic cancer.

The team injected sarcoma and breast cancer cells underneath a mouse's skin and loaded into the software about 300 images of resulting cancerous tissues.

Every time the software guessed incorrectly, a physician would enter the right answer, and the AI learned accordingly. The software eventually was able to detect metastatic cancer with 94% accuracy.

The plan is to have the software put to practical use within three to four years.

As a student, Shimahara once visited a university laboratory in the U.S., where he was impressed by the facilities and the environment. He recalled that it felt more like a major hospital than a lab. He also feared that Japan would severely lag behind the U.S. in such research if nothing were done. With his AI, Shimahara is indeed helping to build Japan's value as a science nation.