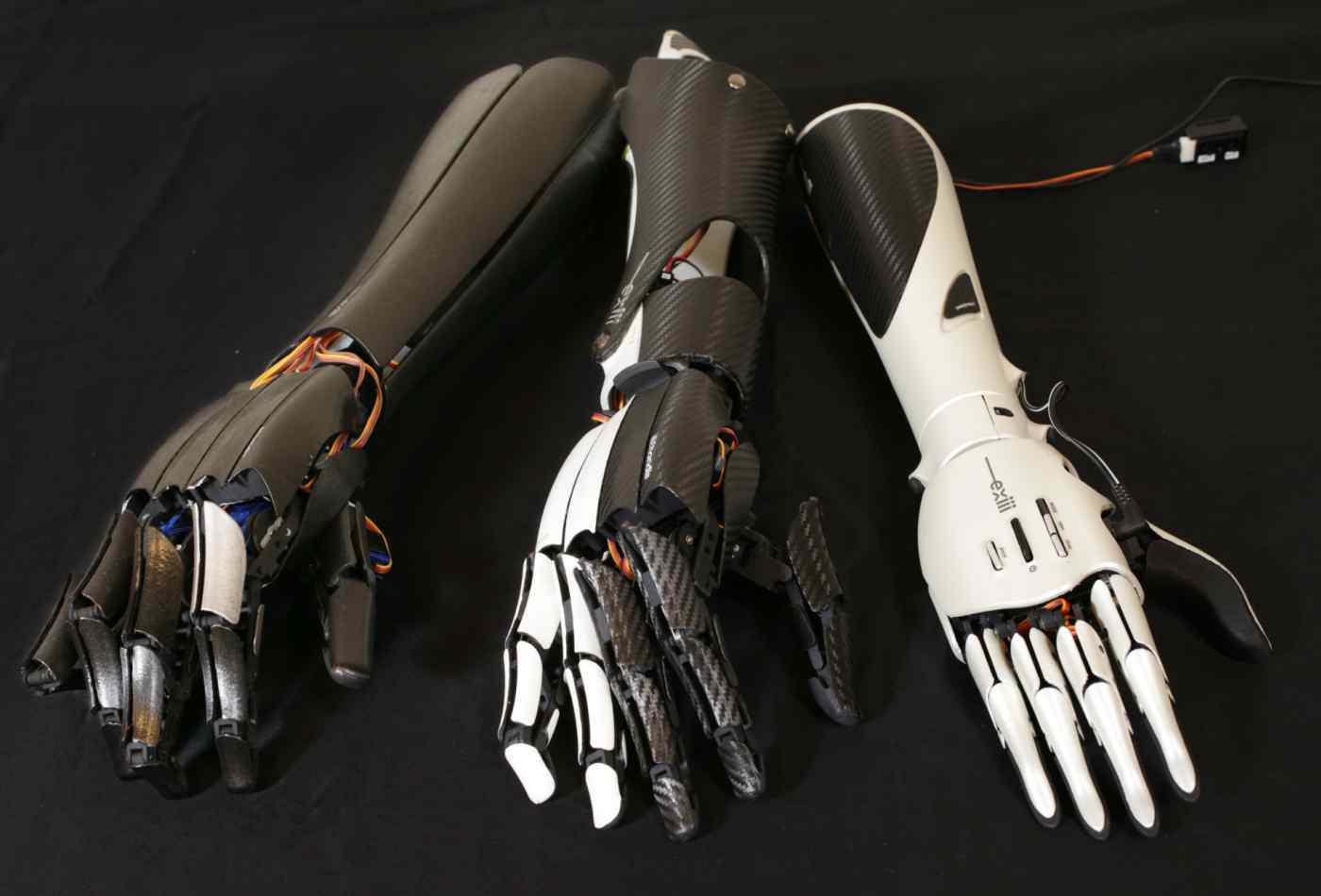 These engineer-turned-entrepreneurs are aiming to create futuristic-looking, cool electronic arms that they hope wearers can use as a form of self-expression, just as they would with sneakers or eyewear.

Genta Kondo, CEO and co-founder of Tokyo-based venture company exiii, is in charge of software development for the company's advanced prosthetic arms. His co-founder Hiroshi Yamaura supervises mechanical design, while another co-founder, Tetsuya Konishi, is responsible for external design. The three of them had worked for Sony and Panasonic before setting out to start their own business in 2014.

Robotic prostheses were first developed in Germany half a century ago. Unlike ordinary artificial limbs, electronic arms provide wearers with a high degree of functionality, enabling them to move their hands to grab and hold objects. Yet observers say that high prices inhibit their widespread use.

Thus, exiii has decided to create electronic arms focused on one single motion: grabbing. Sensors strapped around a wearer's arm detect muscle signals, and five artificial fingers linked to a built-in motor automatically change finger angles according to the degree of muscle expansion and contraction.

Currently an electronic prosthetic arm costs a minimum of around 1.5 million yen ($12,364), but this single-focus approach allows the company to slash the prices to less than one-tenth of that figure. There are several reasons behind the cost reduction. For one thing, exiii's electronic arms function on a much simpler basis and are not designed to move their artificial fingers individually.

Additionally, the company has used 3D printers to manufacture nearly 60 different parts. It also uses general-purpose controller components, such as motors and microcomputers. With the use of 3D printers and soldering irons, the company says, materials cost only about 30,000 yen or so.

In 2013, the three men began to develop their first electronic arm prototype while they were still working for their former employers. In November of that year, they completed the first model, called handiii. It was the international runner-up for the 2013 James Dyson Award, generating a great deal of international attention.

Having grown more confident about their product concept, they decided to set up a start-up in 2014 and came up with an improved version, the handiii Coyote, in November that year. In April this year, the company unveiled its latest electrical arm, the HACKberry.

All these interesting names, exiii said, are based on the concept of marketing its prosthetic arms in the same way that sporting goods manufacturers sell their sneakers. The idea is to offer electronic arms with various designs so that individual wearers can choose one to their own liking. In other words, the company seeks to develop electronic arms that are fun to wear.

However, the three men aren't under the impression that they can do everything alone. They are calling out to people around the world to take part in the development, welcoming new ideas in order to create electronic arms that suit individual users' preferences and physical conditions.

For instance, the company discloses HACKberry's design drawings on its website. In Poland, one father, whose child has a physical disability, has modified the design specification for a right hand so that it can fit a left hand as well, and has now set out to develop a model for his child 30% smaller than the original.

Moreover, exiii allows wearers to customize their prosthetic arms by choosing different materials and colors. They can even customize the finish of their prosthetic arms by applying textured wrapping sheets. "I hope wearers will enjoy decorating them," said Kondo. The idea is that Konishi's simple exterior design can serve as a platform for wearers to express their individuality. 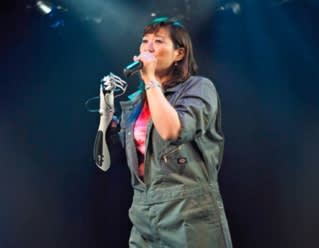 Singer Miyuki Ando, also known as "beautyANDsnow," realized her dream of singing in a live concert with an electronic arm.

Located in central Tokyo, the company's tiny office is stacked from floor to ceiling with development-related documents and past prototypes. Stored among them is a model with 250 names written on it. These 250 people made donations via crowdfunding for the development of functional electronic arms for two exiii supporters. The company launched this crowdfunding project last year to enable these two supporters to use the arms in their own unique ways.

One of them is female singer Miyuki Ando, also known as "beautyANDsnow," who was born with no right hand. The project helped her to realize a dream in June; she gave a live concert wearing an electronic arm. The other supporter is Akira Morikawa, who lost his right arm in an accident. The company is hoping to assist him to try paragliding once again with the help of an electronic arm.

The company is looking to develop the technology to a commercially-viable level by 2016, aiming to increase domestic use of electronic arms to a level on a par with the U.S. and Europe by 2018.

However, there are a number of challenges ahead. Foremost of which is who will take production responsibility if and when a wearer causes an accident. This is due to exiii's production process involving three different parties: those who design the product, those who deliver parts, and those who assemble them. In a sense, this is a difficult issue peculiar to product development through open source hardware.

Despite the challenges, the three men remain unfazed and are seeking to create affordable electronic arms that boast both functionality and cutting-edge design. Their prosthetic arms may have the potential to become the ultimate wearable goods.