TOKYO -- Fresh technology developed in Japan may be about to swing the global energy pendulum back toward coal, by turning the old fossil fuel into a much cleaner energy source. 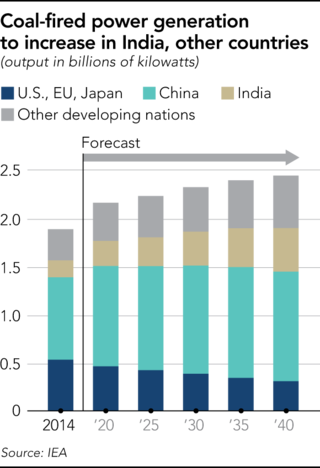 With India and other emerging economies expected to increase their use of the still-abundant black rock, the new technology could help keep their carbon dioxide emissions in check.

A 75-meter-tall iron structure on Osakikamijima, an island with a population of less than 8,000 and full of blueberry and tangerine fields in western Japan's Seto Inland Sea, is a demonstration plant for coal-fired power generation featuring the world's least environmental load. It was built by Osaki CoolGen, a joint venture equally owned by Electric Power Development, known as J-Power, and Chugoku Electric Power, adopting an integrated coal gasification fuel cell combined cycle, dubbed IGFC, for the first time in the world.

While there already are coal-fired power generation plants boasting high efficiency, the demonstration plant, which Osaki CoolGen began operating at the end of March, far outpaces the competition.

Compared with typical coal-fired power plants in the world, the demonstration plant cuts the emission of CO2 per power output by about 40%.

Here is how it works.

For conventional coal-fired power generation, heat from coal burned at a temperature of around 700 C produces steam, which rotates a turbine.

CoolGen's plant is totally different as it roasts coal at above 1,300 C while simultaneously blowing oxygen over it in order to convert the solid fuel into a gas. The system can drastically cut the discharge of CO2 because it uses gas from the roasted coal to generate power instead of burning the rock.

The plant also makes use of exhaust heat, generated when power is produced, for power generation. In addition, it has a fuel cell power generation facility that extracts hydrogen from some of the gas and forces a reaction with oxygen to create electricity.

Using three energy sources -- gas, exhaust heat and hydrogen -- the plant can maximize some 55% of coal's energy for power generation, compared with up to 40% for conventional coal-fired power generation stations. 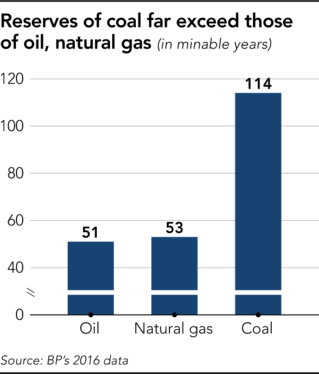 Coal is much cheaper than other fossil fuels. Compared with liquefied natural gas and oil, it is priced roughly half and one-third per caloric unit, respectively.

The cost of building a CoolGen plant is estimated to be about 20% higher than that for conventional coal-fired plants. But it will be economically more advantageous than plants using LNG or oil for power generation as long as the price gaps continue.

In addition, a CoolGen plant can use low-quality coal, which is cheaper than standard coal, because it gasifies the fuel.

Existing coal-fired power plants are estimated to emit twice as much CO2 as standard LNG-based plants. Although coal is cheaper, the construction of conventional coal-fired plants is prohibited in principle in Japan for the sake of curbing CO2 emissions.

But the situation is different overseas. The International Energy Agency forecasts that coal-fired power plants in the world will generate a total of 2.4 billion kilowatts in 2040, up from nearly 1.9 billion in 2014.

Coal-fired power generation is forecast to rise sharply because the use of inexpensive coal is expected to increase in emerging economies and other developing countries to meet growing demand for electricity, although the use of natural gas, which emits less CO2, and renewable energy sources in place of coal is expanding in advanced economies. The use of coal in India is expected to treble during the period.

In fact, the system is the result of technological developments achieved by Japanese companies in a bid to grab new business opportunities overseas, such as gasification furnaces and power generation facilities by Mitsubishi Hitachi Power Systems, gas purification systems by JGC and pretreatment of coal by Diamond Engineering in Uozu, in Toyama Prefecture in central Japan.

The plant is already attracting interest from abroad. The small island is busy hosting inspection tours to the plant from coal-producing nations like Poland and Australia and Southeast Asian, African and other countries where demand for energy is soaring.

In a related development, a challenge to contain CO2 under the sea has started in Tomakomai, Hokkaido, using a technology called carbon capture and storage, or CCS. Pipes with a total length of 5.8km, laid deep into the sea from a coastal point in the northern Japan city, are part of a demonstration plant operated by Japan CCS jointly owned by Tokyo Electric Power Co. Holdings, Nippon Steel & Sumitomo Metal and 33 other Japanese companies.

CCS captures CO2 from gases emitted at thermal power plants and manufacturing factories and stores it in a geological layer at a depth of more than 1,000 meters below the surface of the earth. More than 15 CCS facilities are in operation around the world, such as those storing CO2 in a layer containing crude oil.

While the Tomakomai facility is Japan's first CCS demonstration plant, it involves "a variety of the world's first technologies" including pipe laid at an angle, said Yutaka Tanaka, head of the technical and planning department at the company.

Starting in the spring of 2016, Japan CCS has poured CO2 into pipes at a pace of 600 tons per day while checking for any gas leakage by monitoring seismometers installed at more than 80 locations. The company plans to continue the test until fiscal 2020 before putting the technology into practical use.

The Tomakomai facility is also developing a technology that can separate CO2 from exhaust gases, using one-third of the energy in comparison with conventional systems. Through such efforts, Japan CCS is developing user-friendly technologies to ensure economic efficiency.

U.S. President Donald Trump declared last week that he would withdraw the U.S. from the Paris climate accord, which was put in place to combat global warming. But it is evident that past models of using fossil fuels in an unlimited manner have negatively exposed the earth to the limits of growth.

Technology to efficiently use fossil fuels in an environmentally friendly manner should contribute to sustainable economic growth that is compatible with environmental protection in the 21st century.