KAMAISHI, Japan -- A British charity has set up one of Japan's first community-run marine rescue services in a region devastated by the 2011 earthquake and tsunami.

"This beach used to be full during the summer," laments hotelier Akiko Iwasaki as she stares out at the picturesque Nebama Bay in Kamaishi, Northeast Japan. "Now people are scared of going in the water."

Part of that may be about to change, thanks to a project run jointly by Chelsea College of Arts, University of the Arts London, U.K.-based charity Atlantic Pacific and Future Lab Tohoku, a Japanese NPO committed to the redevelopment of the Tohoku region. Robin Jenkins, a lecturer at UAL and volunteer lifeboat crew member on London's Thames River, said he was struck by two things when he viewed the area after being invited there by Future Lab: the similarity of the coastline to his native Wales, with its many bays and narrow inlets, and the lack of a coordinated marine rescue service.

The concept they developed was to design and build a lifeboat to be crewed by the people of Kamaishi that could respond to regular marine emergencies, but also be agile and versatile enough to cope with the unique challenges of a tsunami. Logistical support for the project came from Bunkyo Gakuin University in Tokyo.

Rescue operations off the U.K. coastline are carried out by lifeboat stations run by teams of local volunteers overseen by the country's Royal National Lifeboat Institution. In contrast, Japanese waters are patrolled by the coast guard, and many rescue missions are left to the country's close-knit fishing communities, who possess vital knowledge of their local coastlines, but often lack specially designed rescue craft.

The boat, baptized "Wales-Go" by its new custodians, was designed and built by students at Jenkins' old high school, the United World College of the Atlantic, which has a long history of marine rescue service. At 4.8 meters in length, it is designed for a crew of four, but can hold up to 18 people in an emergency.

Construction and shipping were funded through UAL's social regeneration scheme fund and charitable donations, and the vessel was given to the Kamaishi community, where local NPO Nebama MIND will oversee its day-to-day running. 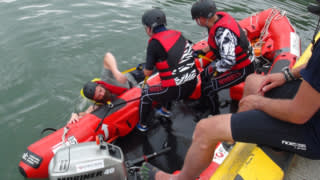 Production was carried out in the most cost-efficient manner possible, yet failed to address the crucial issue of where the boat would be housed once it arrived in Japan. The construction of an entire station would have involved insurmountable costs, not to mention time, and been subject to a host of regulations.

The answer, it turned out, had been staring the team in the face. Transportation would be made in a shipping container that was only half-filled by the boat. UAL students were tasked with designing and converting the remaining space into a small changing room and workspace providing everything necessary for the container itself to become Kamaishi's new lifeboat station.

Moreover, refitting a shipping container proved more sustainable from an environmental perspective than building a brick-and-mortar station, and has the added advantage of being highly resistant to earthquake damage.

Thus, the concept of a "lifeboat in a box" was born.

However, importing equipment of this nature to Japan is not as simple as it sounds. As a country with a strong maritime tradition, the team expected a rigorous inspection from the Japanese authorities, but the sheer amount of red tape involved came as a surprise.

"The process was much simpler in other countries," said Jenkins, referring to a similar project in Greece where Atlantic Pacific deployed to assist with the Mediterranean migrant crisis. "But within Europe regulations are very similar, and the language barrier poses less of a problem."

According to Kate Sedwell, projects and development manager at UAL, licensing has been a major issue. Japan is one of the few countries that does not recognize international boating licenses such as the International Certificate of Competence, meaning a Japanese license holder had to be hired for the entire inspection process.

State-of-the-art flexible fuel tanks also failed to meet Japanese standards as the material they are made from is not used for the purpose in Japan, despite being widely accepted elsewhere due to weight and storage advantages. The container in which the vessel was transported to Japan is anchored in place in Nebama Bay, where it will serve as the lifeboat station. (Photo courtesy of Future Lab Tohoku)

The main sticking point for the inspectors -- one which threatened to derail the entire project -- also happened to be a key design feature that makes the boat ideal for rescue in the aftermath of a tsunami. Whereas Japanese vessels are entirely enclosed, Wales-Go has an open back. This allows casualties to be brought on board quickly and easily. It also means water flooding the deck can be expelled using the forward thrust of the engine -- a situation likely to be encountered in the unpredictable waters generated by a tsunami.

Despite the hurdles, there is no ill-feeling toward the Japan Craft Inspection Organization. "The inspectors were always looking to be constructive, not officious for the sake of it," said Jenkins.

Another key modification UWC made to the design is the shallow hull. Most craft of this type have a hull that sits deep below the surface, but Wales-Go's barely breaches it. This allows the boat to pass over obstacles, such as submerged buildings, that proved so treacherous for rescue operations in the wake of March 11.

Once the boat passed inspection and the container had been set in place, attention turned to training the local community to operate the vessel. Volunteers include local fishermen, firefighters and hoteliers -- even a member of the town's beloved rugby team expressed interest.

"I used to love coming here in the summer as a kid. This project has inspired me to give something back," said Kazuki Hirota, who has been chosen as the first captain of Kamaishi's new lifeboat. "This used to be a marine sports hub. Even before the tsunami we needed a rescue service," said Iwasaki, who was almost washed away by the waves five years ago. "Had there been one in place beforehand, who knows if more lives could have been saved?"

Iwasaki, who set up the NPO that will oversee the lifeboat's operations, hopes the boat will become a focal point for a community that was devastated. "We want to try and bring people back," she said "This is a seafaring community, but now even the fishermen's children don't want to go near the water."

"This project really inspired me because it is focused on local people," she continued. "It's not one of the big government projects."

The boat is much more than just a piece of equipment, according to Jenkins, who sees the importance of the people of Kamaishi running their own lifeboat station as key to the project's success. "It's not a case of importing technology, Japan already has that. We are bringing the concept of a community-based rescue service."