Manufacturers get a grip on green standards

TOKYO -- Although crude's slide on the market has pushed gas prices lower in recent months, drivers still appreciate better mileage. To get the most out of a tank of gas, fuel-efficient tires can be as important as a well-tuned engine.

Eco-friendly tires are designed for maximum fuel efficiency. They do not look very different from ordinary tires at first glance. The difference is the technologies that go into them, which alter the properties of the rubber to make the tires greener. 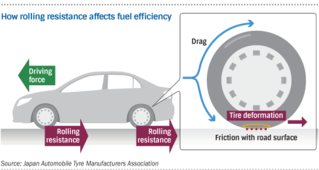 To raise a tire's fuel efficiency, it is necessary to reduce the rolling resistance caused by deformation and friction with the road surface. In general, reducing rolling resistance by 10% improves a car's mileage by 1%. The problem is that they still need to hold the road when the brakes are applied. Adequate grip is therefore needed, even in wet conditions.

To meet these requirements, grooves in the tread are laid out to channel water away from the tire's surface. Tires are also shaped to reduce drag.

New materials help makers along. Bridgestone has teamed up with another Japanese company, consumer products maker Kao, on a new tire material. The dispersing agent they developed more effectively combines silica, which helps the tire roll, with a rubber that provides good grip. The dispersant works like the surfactants that lift dirt away in detergents and has affinity with both water and oil. The material allows silica and rubber to mix well, reducing rolling resistance while helping the tire stick to the road.

The dispersant is used in the Ecopia EX20 series of replacement tires, released in 2014. The Mirai, Toyota Motor's first fuel-cell car for the mass market, is also outfitted with the Ecopia EX20. Bridgestone plans to use the material in truck and bus tires as well. Yokohama Rubber, meanwhile, has turned to the humble orange peel to improve its tires. It has developed a method to mix oil from orange peels with rubber. Orange oil increases the rubber's flexibility, improving grip. When the oil is added to tires with low rolling resistance, "It is possible to make fuel-efficient tires with high grip," said Takayoshi Omae, a group leader at Yokohama Rubber.

Tire makers are also improving the rubber itself to increase flexibility and raise the performance of their tires. Sumitomo Rubber Industries uses a new polymer in its Enasave RV504 tire for minivans, which was released on Feb. 1. The polymer has a dispersed arrangement of styrene, a component that is susceptible to clumping, which keeps the polymer from heating up and lets it roll more smoothly. This has reduced the tire's resistance by 13% compared with conventional tires, Sumitomo Rubber says.

Other companies are also active in the field. Japanese synthetic rubber makers are increasing production of solution-polymerized styrene-butadiene rubber, or S-SBR, which is suited to eco-friendly tires. JSR plans to double its annual production capacity for the rubber to 220,000 tons by 2017. Asahi Kasei and Sumitomo Chemical are also boosting output, primarily in Southeast Asia.

Around 70-80% of S-SBR demand comes from tire makers. Compared with ordinary synthetic rubber used in tires, "the molecular structure [of S-SBR] is easier to handle," said Kazumasa Yamawaki, an officer at JSR. This makes the rubber ideal for use in eco-friendly tires. For example, the S-SBR rubber molecules can be made to adhere to the silica particles more easily, reducing rolling resistance and enhancing grip.

Tire manufacturers are trying to expand sales of eco-friendly products. Bridgestone is promoting them in both developed countries and emerging markets in Southeast Asia such as Thailand. Sumitomo Rubber is aiming for over 10% of the global market for fuel-efficient tires by 2020. Labeling rules requiring manufacturers to show the rolling resistance and wet-grip performance of their tires are encouraging the sale of eco-friendly products. Manufacturers must meet certain performance standards to earn the eco-friendly label.

Stronger environmental regulations are another plus for an eco-friendly tire market that should keep manufacturers rolling in profits.