TOKYO -- A team of Japanese scientists have developed a flying rescue robot with a device that can open doors to enter buildings hit by earthquakes or accidents. 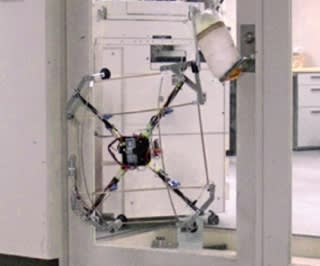 The team at the Tokyo Institute of Technology designed the flying robot to enter buildings to rescue people trapped inside due to disaster or accident. (Photo courtesy of Hideyuki Tsukagoshi)

The robot was developed by Hideyuki Tsukagoshi, an associate professor at the Tokyo Institute of Technology, and his fellow researchers. It has successfully opened an office door and passed through it in an experiment, according to the research team. The robot is designed to survey the situation inside devastated buildings.

Flying robots are capable of flying over rubble and uneven ground levels in outside areas. However, they cannot move around easily inside buildings because doors block their way, so they are of limited usefulness when they go to the rescue of people trapped in disaster-hit buildings.

The new robot is flat and rectangular, 60-70cm on a side, and hovers using propellers on its four corners.

To open a door, the robot uses suction cups to stick to the door's surface. Then, it presses its arm with an air bag-like device against the door handle and blows the bag up to open the door. After partially opening the door in this way, the robot uses its propellers' wind pressure to open it further.

After making enough space, it flies through the door. The research team plans to equip the robot with a small camera so they can remotely control it.