OSAKA -- Osaka Gas has found a way to produce graphene, a layer of carbon just one atom thick, at half the cost of conventional methods in a development that could lead to lighter automobiles and smaller smartphones.

The Japanese gas company developed technology for making graphene from high-purity graphite. The technique involves a high-speed collision of graphite with a mixture of such substances as coal-based fluorene and water.

Osaka Gas has already begun supplying the material on a trial basis to 10 or so companies, including plastic and electronics manufacturers. It aims to bring the price down below 10,000 yen ($82.39) per kilogram by beginning full-scale production within the year. Production will likely take place at an Osaka research center for the time being, with additional equipment possibly added depending on demand.

Graphene is usually made by connecting carbon atoms from gas containing carbon in a vacuum. But graphene so produced fetches more than 20,000 yen per kilogram. 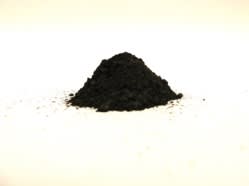 Meanwhile, Japanese chemical company Adeka plans to begin commercial production of graphene by 2020. Technology licensed from the University of Tokyo will produce graphene by exfoliating graphite using microwaves. The Tokyo-based company aims to bring down the price to around 10,000 yen per kilogram through mass production.

Graphene is a sheet just 1 nanometer thick in which carbon atoms are bonded together in a hexagonal lattice. The carbon atoms are tightly packed, making the material as strong as diamond. It also conducts heat and electricity well.

Thanks to these properties, graphene is expected to find wide use in industrial applications if the price falls by half. Mixing it with plastic could result in strong, light autoparts. In smartphones, graphene may be used in touch screens, electrodes and other components.

The global graphene market is estimated at 1.3 billion yen in 2013 but could grow to 100 billion yen by 2030 if prices drop, according to Japan's New Energy and Industrial Technology Development Organization.