TOKYO -- A serious labor shortage is plaguing Japan's restaurant industry. As a result, not only are personnel costs climbing, but a lack of sufficient help is also a drag on store management and new store openings.

Securing qualified help is especially difficult in food preparation, an area in which workers with skills and many years of experience are particularly sought-after. To alleviate this problem, technology is being developed that will enable automated food preparation. Progress in such technology could also help bring Japan's culinary culture to the world.

In the future, there may be restaurants in which all food is prepared by robots. One hint of what might lie in store is Huis Ten Bosch, a theme park in Sasebo in southwestern Japan's Nagasaki Prefecture, operated by the travel agency H.I.S. In July, the park opened the Henn-na Restaurant -- a buffet-style establishment where robots prepare the food -- in its Robot Kingdom complex. In addition to five types of cuisine, the robots also prepare drinks and soft serve ice cream.

What draws the most attention is the robot in charge of making okonomiyaki, a type of savory pancake. A robot with arms coats a griddle with oil, mixes batter and with two spatulas nimbly flips the pancakes before finishing them with mayonnaise and dried green seaweed. The robot doesn't drop a single pancake.

The robots are based on control technology from Yaskawa Electric that is used for grabbing and carrying parts in factories. In addition to pancakes, robots in the restaurant also prepare Chinese-style fried rice, doughnuts and cocktails.

Labor-saving robots are providing behind-the-scenes support for the development of Japan's restaurant industry. With labor shortages proving to be a serious bottleneck, many companies are moving forward with new technology development. 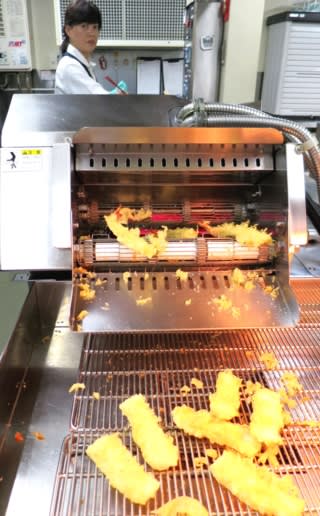 Tenya's automated fryer can fry tempura in just over 100 seconds.

Sushi, the best known example of Japanese cuisine, is growing in popularity around the globe, but there is a shortage of sushi chefs. Jasdaq-listed Suzumo Machinery has developed a "rice ball robot" capable of preparing sushi rice that appears as though it has been pressed into shape by a chef. A blade-like screw rotates and vinegared rice is pushed out the bottom. The rice is then subjected to pressure by rollers to produce a firmness suitable for sushi rice, after which the rice is cut into bite sizes using a comb-shaped knife. As the finishing touch, the sushi rice is pressed from the top so that the dish can be completed by adding toppings.

What enables the difficult adjustment of force to mold the sushi rice are the rollers. A total of six are lined up, in pairs on the left and right. Minute depressions on the side surfaces of the rollers allow some air to be mixed into the rice as it is molded, just like when it is shaped by human hands.

The first model came into being in 1981. At that time, the robot could make 1,200 pieces of sushi an hour, but the current model, released in 2014, can prepare 4,300 pieces an hour. Suzumo Machinery has a 70% share of the domestic market for this kind of robot and has contributed greatly to the expansion of conveyor-belt sushi bars.

Conveyor-belt sushi was born in 1958. According to the Japan Foodservice Association, the sushi restaurant market (including establishments other than conveyor-belt sushi bars) is down from a peak in 1992 but rebounded to 1.41 trillion yen in 2015, its highest level since 2000.

Among the earliest to adopt automated food preparation was Ten Corp., a subsidiary of Royal Holdings that operates the Tenya chain of tempura-over-rice restaurants. Making tempura requires skill and many years of experience. In order to automate tempura preparation, the company has been working to improve its machinery since its founding in 1989.

When ingredients are dropped by chopsticks into a conveyor belt-like fryer, the food is immersed in oil heated to around 180 C. The ingredients emerge after having been fried for around 80 seconds and are then transported along the conveyor for another 20-30 seconds, during which the food is gradually cooked by the residual heat. With just one month's training, virtually anybody can prepare tempura using the technology. "We can prepare large numbers of orders even during the busiest times," explains Yasuhiro Mochimatsu, the company's president.

Major ramen chain operator Kourakuen Holdings in 2016 developed the "vegetable stir-fryer" to stir-fry ingredients at high temperatures. The machine rotates a large pan to mix and heat vegetables, mimicking the technique employed to prepare Chinese-style fried rice. Because vegetables are lighter than rice, the company spent a year working with an equipment manufacturer to research the best pattern and speed of rotation. In the past, the vegetable menu offered only stew because of the difficulty shop workers had in cooking the vegetables in a wok, but automation has made it possible to provide cuisine with uniformly good quality. As a result, the company is slated to introduce the vegetable stir-fryer at nearly 200 stores by March 2017.