TOKYO/SILICON VALLEY -- Although the 2020 Tokyo Olympics is still five years away, service robots are already preparing to welcome guests from around the world.

They will be crucial partners to their human counterparts and are expected to play a key role in offering hospitality at various event sites, hotels, popular tourist spots and elsewhere.

"Welcome to the kingdom" 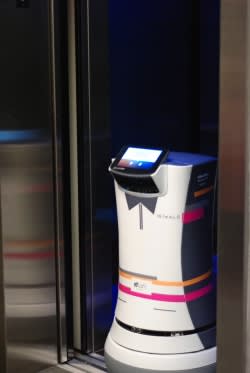 Botlr ferries toothbrushes and other sundries to guests of the Aloft Hotel in Silicon Valley.

Huis Ten Bosch, a theme park in Sasebo, Nagasaki Prefecture, that attracts some 2.79 million visitors a year, is getting a head start this summer.

The Dutch-themed park is hoping service robots can help it slash costs by doing jobs that humans would want to be paid for. By taking other drastic cost-saving measures, the hotel will offer much lower room rates than conventional hotels.

Hideo Sawada, president of Huis Ten Bosch, has given his employees a pep talk, saying the hotel will "aim for one of the highest productivity [rates] in the world."

Three robots will be stationed at the reception desk to greet guests; one of their co-workers will be an automatic check-in machine. The three robots will include a Nao, produced by France-based Aldebaran Robotics.

One of the other robots will be produced by Kokoro, a Tokyo-based robot production subsidiary of Sanrio. Huis Ten Bosch is keeping the third robot under wraps to "surprise guests," a senior company representative said.

The Nao humanoid robot is already undergoing several hours of training a day, repeatedly saying, "Welcome to the kingdom of flowers and light."

In addition to the three reception robots, the hotel will use a porter robot to carry guests' luggage to their room.

And for guests arriving early, the hotel will deploy a locker robot, Yaskawa-kun, developed by Yaskawa Electric.

A Yaskawa-kun is already working inside the theme park in a soft-serve booth, which often has a long queue of customers wanting to buy frozen treats from the contraption. In the U.S., a service robot that toils at the Aloft Hotel in Cupertino, a city in California's Silicon Valley, has already drawn attention. Botlr, as the robot is known, carries toothbrushes and other sundries to guest rooms.

Botlr, developed by U.S. robot venture Savioke, moves around the hotel roughly as fast as humans walk, negotiating obstacles and notifying elevators it is waiting for a ride through radio communication.

Replacing the robot's installed software enables it to speak in other languages. Takerobo is to start marketing Robocots through stores at about 100,000 yen ($826) in the second half of April.

Takerobo President Kiyoaki Takeuchi used to work at Nihon Unisys. After concluding that Japan has not fully commercialized its robotic technologies, he left Nihon Unisys and in August 2011 founded Takerobo.

NTT Docomo Ventures last spring invested in Knightscope, a U.S. security robot venture. The company also chipped in during a $5.2 million fundraising round in December.

Knightscope's idea is to use autonomous traveling security robots to patrol public spaces. Data collected through their sensors and also from social networking sites would be analyzed and used for security purposes.

NTT Docomo Ventures started testing a security robot system in the U.S. last spring in a bid to introduce it in Japan as soon as possible -- in time for the Tokyo Olympics.

The Silicon Valley Bureau contributed to this article.